After Gentaro's death at Ryusei's hands, Kengo does not know how to resurrect him as the Aries Zodiarts takes the other Kamen Rider Club members captive. Elsewhere, having betrayed Tachibana, Ryusei is able to talk to the revived Jiro.

With Gentaro dead, Kengo confronts Ryusei about how he will never forgive him for betraying everyone even if his reasons are selfless. Shun is about to avenge Gentaro when the Aries Zodiarts's power takes effect. While the others fall to sleep, Kengo is saved by Tachibana remote controlling the Machine Meteorstar as he gets Gentaro's body to safety. Aries orders Ryusei to stop him, however when Ryusei attempts to transform the Meteor Driver doesn't respond as Tachibana tells him that he has betrayed both himself and Kamen Rider Club and will never become Kamen Rider Meteor again, Ryusei accepts it if it means Jiro can be saved. Later, Yamada debriefs his captives of his work, Academic Rebellion, where they will play the executioners of the rebels played by Mei Shirakawa and her friends. But when the Kamen Rider Club refuses to follow the script, Yamada decides to rewrite them as the executed. Soon after, Yamada completes his arrangement and revives Jiro. Though Ryusei manages to get Jiro to switch off his Zodiarts Switch, he is content with the situation until he learns that Jiro's reason to use the Switch was to be like Ryusei before the youth relapses.

After learning from the doctor that Jiro lost the will to live, Ryusei realizes too late that he wanted to be friends with Gentaro. Coming to the aid of the Kamen Rider Club, Ryusei states he has lost Jiro, Gentaro and the right to be a Kamen Rider. Now the only thing he feels he can do is to protect Gentaro's friends not for redemption, but because it is the right thing to do. Setting his powerless driver aside, Ryusei engages the Aries Zodiarts and the Dustards in a hopeless fight, allow Mei and the others to free Kamen Rider Club. In the Rabbit Hatch, Kengo is unable to restart Gentaro's heart. He receives a call from Tachibana who reveals himself as the one who gave the boy the Gate Switch. On Tachibana's instructions, Kengo goes to the Rabbit Hatch's outer rim to find a message from his father Rokuro Utahoshi that the power of friendship has the ability to do the impossible. With renewed hope, Kengo uses the Cosmic Switch to revive Gentaro.

Although they're free, Yuki and the others find themselves unable to abandon Ryusei despite everything he's done, and just as Ryusei is about to collapse from battling unarmed, Gentaro arrives and gets the others to forgive him with Ryusei accepting his friendship. Taking over the fight, Gentaro transforms into Kamen Rider Fourze and uses the Cosmic Switch to assume Cosmicstates. With the powers of all forty Astroswitches at his disposal, Kamen Rider Fourze overpowers the Aries Zodiarts who begins to assume his Supernova form. However, taking him outside Earth's atmosphere via a warp hole, Kamen Rider Fourze defeats the Aries Zodiarts. He then returns to Earth with Tatsumori's unconscious body, however Virgo suddenly arrives and confiscates the Aries switch before stating she will wipe the majority of Tatsumori's memory.

Virgo then delivers the switch to Gamou and reports on Cosmicstates. Gamou realizes that Fourze and Meteor have the same supporter, and wants him found. Virgo promises to do so.

Later, as Ryusei tells the others that Jiro's health has improved and says the turnaround was due to Gentaro's suggestion of simply talking to him. Tatsumori meanwhile is in a coma, and Miu notes the irony that the boy who made people fall asleep is now in that position himself. Kengo tells the others that in order to protect the Anti-Zodiarts group Tachibana has entrusted them to keep Ryusei's identity as Kamen Rider Meteor a secret, and Tomoko returns the Meteor Driver to him. Suddenly Ohsugi enters having heard the word 'secret' and wants to know what everyone knows that he doesn't, and Kamen Rider Club scramble to keep the information from 'the one with the loosest lips'.

This episode, along with the previous episode, was combined into the director's cut edition, Kamen Rider Fourze: Climax Episode (仮面ライダーフォーゼ クライマックスエピソード, Kamen Raidā Fōze Kuraimakkusu Episōdo). It was released on DVD and Bluray on October 21, 2012. 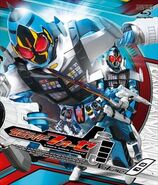 Retrieved from "https://kamenrider.fandom.com/wiki/Super_Space_Sword?oldid=580334"
Community content is available under CC-BY-SA unless otherwise noted.