This weapon, just like the Gan Gun Saber, can be summoned from the Ghost Driver. Like the former as well, should it be destroyed, Ghost can simply summon another copy of it.

The Sunglasseslasher is composed of the following parts:

. During the battle, the two heroes came to realize that Ghost's Sunglasseslasher coincidentally shared the same basic shape as the Zyuohger's Zyuoh Buster

Much like Ghost's default weapon, the Gan Gun Saber, the Sunglasseslasher has two basic modes which can be interchangeably used in battle. 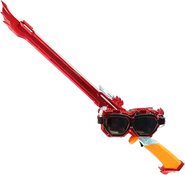 The Sunglasseslasher Sword Mode is also among the various Rider Weapons used by Ganbarider in Kamen Rider Battle: Ganbarizing.