Suika Arms is the largest Arms Change, and it shows by having the most monstrous punching and kicking power once in Yoroi Mode. Consequentially, it also has the worst jumping height in all of Rider history, and any Rider can practically outrun it. Though this is rendered moot thanks to Odama Mode and Gyro Mode.

Despite its monstrous punching and kicking ability, Suika Arms is very vulnerable while in Yoroi Mode or Gyro Mode and can easily be destroyed/damaged beyond functioning as shown when users of the Genesis Driver are able to dispatch Suika Arms unmanned automatons with ease.

After a utilization, the Suika Lockseed's color becomes grey, indicating that its energy is low and needs time to recharge back to its green color before it can be used again.

A Suika Lockseed was possessed by Armored Rider Zangetsu, Takatora Kureshima, for use in extreme measures, it stored in his suit case along with his Sengoku Driver and Melon Lockseed. It was secretly taken by his brother Mitsuzane, Armored Rider Ryugen, Durian Rider, Go to War! who later gave it to Armored Rider Gaim in the confrontation against Armored Rider Bravo. Assuming Suika Arms for the first time, Gaim was seemingly crushed by the abnormally massive Armor Part but soon emerged and eliminate Bravo's "tactical unit" of Elementary Inves, a Komori Inves and a Shika Inves, in the Arms' default Odama Mode before pushing back Bravo himself when he attempted to stop the giant ball. Attacking Gaim, Bravo attempted to split open the watermelon only for Suika Arms to reform with Gaim switching to Yoroi Mode, wielding the Suika Sojinto, and punching Bravo away. Gaim was then faced with the behemoth Inoshishi Inves (Evolved) and was evenly matched before it escaped with Gaim making chase in Odama Mode alongside Ryugen on the Sakura Hurricane which he loaned him. Catching up and returning to Yoroi Mode, Gaim destroyed the massive Inves with the Twin Bladed Split. Great Ball Watermelon, Big Bang!

Breaking out of the God Tree in Suika Arms Yoroi Mode with Kamen Rider Wizard on WizarDragon, Gaim proceeded to exit the Suika Arms, leaving it to be kicked in Odama Mode by WizarDragon's Strike End to against the God Tree, providing an opening for the two Kamen Riders to perform their double Rider Kick and destroy Kamen Rider Bujin Gaim Lotus Position. Kamen Rider Gaim: Sengoku Battle Royale

Provided with the Suika Lockseed by Ryugen, Gaim assumed Suika Arms Yoroi Mode to destroy a Kamikiri Inves and a trio of Elementary Inves before following Ryugen to the Helheim Forest. Rider Great Assembly! Revealing the Mystery of the Forest! Later, Gaim used Suika Arms Gyro Mode to fight his way through the crack into Yggdrasill's facility which he was shocked to learn was Yggdrasill Tower itself as he went through the opened celling, engaging in a skirmish against a horde of Elementary Inves that had escaped on the roof. Overrun by the Elementary Inves as they attempted to dogpile him, Gaim warded them off him by switching to Odama Mode before proceeding to Yoroi Modes. Receiving assistance from Yggdrasill Tower's laser turrets which had been activated by Ryoma Sengoku, Gaim was ultimately successful in wiping out the Inves, relieving Yggdrasill's researchers who had assumed that their Suika Armed savior was Overseer Kureshima before he appeared before them much to their confusion. The Truth Behind the Christmas Game

Facing off against Sigurd in the Helheim Forest, Armored Rider Baron assumed Suika Arms Yoroi Mode, in which he wielded a specialized lance, to overcome him. The Gifted Secret Weapon

During the Rider War in Zawame City, Gaim, dwarfed by the Jumbo Kamen Rider J, employed Suika Arms to face the Showa Rider. Assuming Gyro Mode as he jumped off his shoulder after running up the enlarged Rider to properly fight J, with the smaller Gaim proving to be more than a perfect counter to J, Gaim switched to Yoroi Mode and defeated J by skewering his Suika Sojinto hard into his chest, turning him into a Lockseed. Heisei Rider vs. Showa Rider: Kamen Rider Taisen feat. Super Sentai

Confronting Gaim in the Helheim Forest, Sigurd used his Sid Lockseed to animate a trio of Suika Arms against him. Faced with the Suika Arms initially in Gyro Mode, Gaim assumed Kachidoki Arms, proceeding to take down one of them with the DJ Gun. Ordered by Sigurd to assume a defensive position, the remaining two Suika Arms adopted Odama Mode, which proved resistant to the DJ Gun's firepower. Gaim's Kachidoki Arms proved just as resilient when the Suika Arms colided with him, however, and he was able to push them back with his battle flags. Finally, the Suika Arms turned to Yoroi Mode only to be quickly eliminated by Gaim's Musou Saber Taiken Mode. The New Formidable Enemy: Over Lord

Four Suika Arms units were among a group of Kurokage Troopers whom used to test the power of the android body Hakaider, which Ryoma Sengoku had transplanted his brain into. They were easily defeated by Ryoma, who had grown an urge to destroy as Hakaider. Fortunately for the fallen Kurokage Troopers, Marika intervened and stopped the test. The Red and Blue Kikaider

Having received the Suika Lockseed from Baron, Armored Rider Knuckle loaned it to Gridon while fighting with him and Bravo against the Inves horde. This came to the dismay of Bravo, who lamented that Gridon had unprofessionally employed the weapon in battle without testing it beforehand. Indeed, the weight of Suika Arms made itself apparent immediately upon transformation; Gridon was restricted to Odama Mode and found himself unable to move. The transformation was not wasted, however, as Bravo wielded the Odama Suika Arms, still containing Gridon, as a weapon against the horde, destroying multiple Inves. The Arms was then released by Bravo and proceeded to move beyond Gridon's control, destroying further Inves before soon dissipating and leaving Gridon exhausted. The King's Power and the Queen's Resurrection

A set of unmanned Suika Arms units were stationed alongside Tulip Hoppers by Professor Ryoma as an automated security system for his secret pathway to Yggdrasill Tower in order to intercept potential intruders, of which he neglected to warn the Armored Riders when he guided them into entering the Tower, resulting in them being confronted by an initial guard of two Suika Arms and four Tulip Hoppers which were engaged by Baron, Knuckle and Marika while the Professor and Kouta pressed on. Given the Suika Lockseed by Baron, Knuckle assumed Suika Arms himself, first steamrolling through the hostiles in Odama Mode before utilizing specialized fighting gloves in Yoroi Mode, quickly eliminating the opposition with assistance from Baron and Marika. The Do-or-Die Tower Break-In Strategy! The Armored Riders were soon met by a second guard consisting of three Suika Arms and four Tulip Hoppers and swiftly overcame them as well. Awakening the Over Lord

In a potential future, Two People Aiming At the Future several Armored Riders who were presumably Kurokage Troopers appeared in Suika Arms among the Inves armies of Baron as well as Zangetsu and Ryugen in the Sengoku Rider War. Baron's Suika Arms Riders were in Gyro Mode as his army engaged Gaim and his army of Inves, while the Suika Arms Riders in Zangetsu and Ryugen's army, which stood neutral and observed, were in Yoroi Mode. Transform! The Orange from the Sky!?

In this alternate world created by Lapis, a set of six Suika Arms units were among the private militia assembled by Oren Pierre Alfonzo and Hideyasu Jonouchi against the Yggdrasill army led by Takatora Kureshima in Zawame City. Ultimately, the battle ended with both armies totally destroyed. Kamen Rider Gaim: Great Soccer Battle! Golden Fruits Cup! 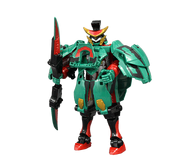 This form can interchange into three modes.

Gyro Mode
Add a photo to this gallery

Depending on the user, Suika Arms Yoroi Mode wields a different type of weapon.

Unnamed gloves
Add a photo to this gallery

Suika Lockseed
(unlocked & opened)
Add a photo to this gallery

Retrieved from "https://kamenrider.fandom.com/wiki/Suika_Arms?oldid=525060"
Community content is available under CC-BY-SA unless otherwise noted.