Start the New Game! (New game起動！, Nyū Gēmu Kidō!) is the twenty-fifth episode of Kamen Rider Ex-Aid. It features the debut of the Ride-Players from Kamen Rider Chronicle, along with the first appearance of the Buggle Driver II and the Toki Meki Crisis Gashat.

Recently, Emu has been feeling a little worried. He is very quiet and hasn't talked much since Poppy Pipopapo suddenly disappeared. Just then, Hiiro is shocked by the sheer number of emergency calls coming to CR, all reports of the game illness! As the only CR doctors, Emu and Hiiro rush to the indicated locations, but what they find there is an unbelievable sight...

Emu looks with horror at the scene before him of a group of identical Rider-armored people with various Gashacon weapons fighting Salty and his cook Virus henchmen; Parado walks up and welcomes him to the ultimate game.

Earlier that day: Emu is in CR with Hiiro, moping over Poppy's recent absence, but they receive an emergency call, then another, and another. Emu goes to a construction site and diagnoses a patient with a new version of Salty's game illness before they take out a Gashat and transform into a Ride-Player, racing off. Emu chases him to a crowd of Ride-Players fighting Salty and his cook Viruses; Hiiro has meanwhile found other patients transforming to fight Aranbura and his monk Viruses. They transform into Ex-Aid and Brave Action and Quest Gamers Level 2 to help, but the Ride-Players toss them back for interfering. A new person, Tsuji, walks up and triggers his own Gashat to transform before asking about a tutorial; Poppy Pipopapo appears to explain the game to Ex-Aid's surprise. At his clinic, Nico shows Taiga a commercial for Genm Corp.'s new game, Kamen Rider Chronicle: reality and virtual are mixed, players transform into heroes to fight Bugsters in the real world to gather trophies from beating 13 bosses and unlock the final boss. Salty easily knocks down the Ride-Players and leaves, but Poppy adds that throughout the game are rare characters called Kamen Riders who will drop special items when defeated; the Ride-Players turn and attack Ex-Aid and Brave. Brave covers his escape with Gashacon Sword flames, while Ex-Aid upgrades to Maximum Gamer Level 99, the Ride-Players seeing they're out-leveled and giving up. Only the first patient stays, but he collapses from the infection, and is taken to CR.

Taiga and Nico arrive at Genm Corp. and intercept CEO Ren Amagasaki, pointing out that Kamen Rider Chronicle was Kuroto Dan's idea; Hiiro also arrives and questions Poppy's involvement in the game. Ren dodges Taiga's question and tells Hiiro that Poppy accepted his offer to become the game's mascot. Hiiro and Taiga can tell that only trouble will follow. At CR, Emu explains the game illness to the patient, Tenma, who wants to defeat Salty himself to cure his own illness; Emu responds to another call. At their hideout, Ren congratulates Poppy on the new game's success and Poppy congratulates Parado on his dream coming true.

Emu finds Tsuji and five other Ride-Players fighting Salty and his cook Viruses again, transforming to Ex-Aid Level 2, but Salty reveals himself to now be Level 10. Ex-Aid tries using Mighty Brothers XX, but the Ride-Players attack the "rare character", stealing and using the Gashacon Breaker to knock him out of his transformation, grabbing up his other Gashats to get the Gashacon Key Slasher and Gashacon Sparrow (the Player who took Mighty Action X got nothing, as the Breaker was already claimed by someone else). Emu watches as the Ride-Players attack Salty and the Viruses, Parado walking up and welcoming him to the ultimate game, his dream. Parado then transforms into Para-DX Puzzle Gamer Level 50, removing Salty and his minions to face the Ride-Players himself; despite their new weapons, they are no match. Para-DX uses Speeding-Up, High-Jump, and Muscular Energy Items to power a Perfect Critical Combo, Hiiro, Taiga, and Nico arriving to see him hit and defeat the six Ride-Players, knocking them out of their transformations, followed by the announcement "Game Over". Tsuji tries triggering his Kamen Rider Chronicle Gashat again, but starts disappearing; Poppy arrives to announce that players only have one life, and those who lose and Game Over will die. The doctors can only watch as the players digitize and fade away, leaving Emu's stolen equipment behind. Parado untransforms, asks if Emu is having fun, and explains that Kamen Rider Chronicle isn't a game where humans defeat Bugsters, but where Bugsters defeat humans; it's now the disease's turn to hunt the people to extinction.

At their hideout, Poppy wants the players to have more fun, and Ren presents her with a bouquet of roses; inside are a green Gashacon Bugvisor and a new Gashat. 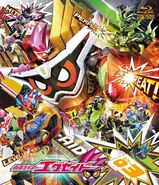 Retrieved from "https://kamenrider.fandom.com/wiki/Start_the_New_Game!?oldid=494039"
Community content is available under CC-BY-SA unless otherwise noted.