The Cancer Zodiarts threatens the members of the Kamen Rider Club now that he has attained the Supernova ability. While he still cannot transform, Ryusei discovers that Jiro's condition has taken a turn for the worse.

As Tachibana tells Ryusei that he will take the Meteor Driver back soon, Kamen Rider Fourze has trouble dealing with Cancer Nova. Luckily, the Cancer Zodiarts reverts to normal as the Virgo Zodiarts comes to escort him to safety. However, before reporting his progress to Gamou, the Cancer Zodiarts steals Ryusei's life force and tells him to meet him in Classroom 2-B by 3:00 PM.

After regaining consciousness, Ryusei finds that it is ten minutes to three as he goes to face Kijima alone. However, after receiving a call from the hospital that Jiro has a fever, Ryusei is conflicted before finding Gentaro overhearing him and insisting to go with him. Gentaro tells Kijima that Ryusei needs to be somewhere else, so he offers up his own life force along with the life force of the rest of the Kamen Rider Club's to get Ryusei's back. Annoyed with the Club's conviction, Kijima accepts their offer and makes the trade on the condition that he will release them if Ryusei returns within the hour. Once at the hospital, Ryusei gets a call from Tachibana that he has a final chance to redeem himself and gives him the location of where he will get the Meteor Storm Switch.

However, learning that he must get it at the same time he needs to return to Classroom 2-B, Ryusei chooses the Kamen Rider Club over the Meteor Storm Switch. By the time he returns, Ryusei finds that the Cancer Zodiarts has passed the time with his "Open Mic from Hell" with only Tomoko left conscious. Admitting that he has no intention to keep his word, the Cancer Zodiarts attacks Ryusei before the youth points out that he allowed himself to be beaten up so the Horoscopes can laugh at his misery, tricking him into having the Kamen Rider Club members' life force return to their bodies. As Kamen Rider Fourze battles an infuriated Cancer Nova, making it to a nearby lighthouse, Ryusei tells Tachibana how much the Kamen Rider Club means to him before obtaining the box that holds the Meteor Storm Switch. Tachibana, surprised by his new conviction, tells Ryusei to silence Kijima with extreme prejudice. 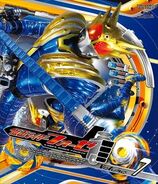 Retrieved from "https://kamenrider.fandom.com/wiki/Star_Storm_Comeback?oldid=583033"
Community content is available under CC-BY-SA unless otherwise noted.