The Whereabouts of Each

"The power of the Category King...is in my hands!"
―The Spider Undead, while possessing Mutsuki, finally obtaining the Tarantula Undead's power.[src]

The Spider Undead (スパイダーアンデッド, Supaidā Andeddo) is a recurring villain in Kamen Rider Blade. He is classified in the series as the Category Ace of Clubs Undead.

The Spider Undead is an accomplice of the Peacock Undead, appearing for Garren to seal while he spewed out golden spiders to latch on ideal hosts. Once finding an ideal host in Mutsuki Kamijo, the Spider Undead intentionally had himself sealed into the Change Spider card to complete the Leangle. Though sealed, the Spider usually takes over Mutsuki's body, using him to become more powerful for the Battle Fight until he no longer needs a human host.

Affected by Titan's venom in episode 42, Spider starts to completely take over Mutsuki to the point of turning into the Undead himself. The Spider was forced out from Leangle during episode 42 when attempting to assume his King Form, with Mutsuki free of the Undead's influence thanks to Hikaru Jō giving Noboru Shima a stronger influence. The Spider was properly resealed by Mutsuki with the King Rouser.

Though unsealed in Missing Ace by the Albino Joker, the Spider Undead was resealed by Garren Jack.

The Spider Undead is one of many Undead who appear in the Kamen Rider Blade video game.

The Leangle system was developed through tricks and manipulation by Isaka, the Peacock Undead, who needed the sealed Spider Undead to complete it. However, as later revealed, the Undead was not sealed properly and thus manipulated his users for his own agenda making him also the user of the Rider. 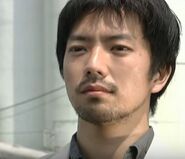 Go Kiryu
Add a photo to this gallery
Spider Undead

The Spider Undead is able shoot webs from his mouth to immobilize his victims, drain the lifeforce of others, and spawn golden spiders to seek out and latch onto ideal hosts. While in the form of an improperly sealed Rouse Card, he can control the wielder.

When possessing Mutsuki Kamijo, he is portrayed by Takahiro Hojo (北条 隆博, Hōjō Takahiro) and voiced by Kiyoyuki Yanada.

Retrieved from "https://kamenrider.fandom.com/wiki/Spider_Undead?oldid=660968"
Community content is available under CC-BY-SA unless otherwise noted.