Soji Kusakabe is a mimic version of Soji Tendo who was unknowingly captured by Mishima and used for the Hyper Zecter test. It is finally revealed that he is able to use the Dark Kabuto Zecter, a Zecter that mirrors the Kabuto Zecter. His Rider Form is similar to Kabuto's, but he has yellow eyes and his color has changed to black, with the exception of the top of his head, chest, and shoulders which contains dark red circuits which light up upon Cast-Off.

When he is first introduced, he was at the edge of time and space, existing in an unknown universe with Hiyori. It is discovered that he is actually a human that was modified into a Native by Negishi's experiments, in hopes of turning all of humanity into Natives.

Shown in episode 39, he seems to be a kind person that wants to protect Hiyori just as the original Tendo does. His innocence is shown when he observes the flowers and gives off a kind laugh. When Kabuto is carried to this dimension, the mimic Soji stands by Hiyori defensively, angered by the presence of Kabuto. Calling upon the Dark Kabuto Zecter, he changes into Dark Kabuto and prepares to fight Kabuto. During his first battle, he and Tendo initiate similar Rider Kicks, resulting in Tendo being defeated and flung back to the real world.

During episode 42, Dark Kabuto arrives in the real world through a bolt of lightning, and walks away with a childish look on his face. Later in episode 43, he appears before Kagami and others, stating that he's going to eliminate his other self. The mimic Soji eventually meets the real Tendo and the two engage in battle. The real Soji decides to allow himself to be defeated and thus when Dark Kabuto returns to the universe Hiyori is trapped in, Renge can track the portal and find Hiyori. When Tendo is on the brink of defeat, Gatack saves him and manages to convince him to fight Dark Kabuto, saying that he cannot allow himself to be defeated like that. Kabuto, now renewed with the will to fight, defeats Dark Kabuto using the Hyper Zecter. However, Hiyori appears after a solar eclipse and says that she is happy to stay with Dark Kabuto in another world. After doing so, Hiyori changes into Sisrya Worm and prepares to protect Dark Kabuto.

After Hiyori and Dark Kabuto return to their dimension, they meet up with Tendo once again, who says that Hiyori should come back. The mimic Soji asks Tendo if he can truly keep his promise of always being by Hiyori's side, and Tendo says he can't. However, he will protect Hiyori for as long as he can, fighting all those who do evil to the world, not because they are Worms. Soon after, Hiyori leaves and abandons Dark Kabuto. Furious, he arrives in the real world and assaults Hiyori, only to meet two more Reiji Nogis. The Nogis then ask him to cooperate with them, telling Dark Kabuto that he does not know who he truly is. Refusing, Dark Kabuto leaves in a frenzy after attempting to fight the Nogis. After returning in episode 47 to challenge Tendo, he is defeated by Hyper Kabuto. The unconscious mimic Soji is then captured by Mishima once again.

After being tormented by Mishima and Negishi, who both state that he is a failure, he goes into an outrage, attacking Mishima. It is then that they tell this mimic that he was actually a human once, and was the first to be altered into a Native. In turn, he was told to mimic Tendo, creating who he is now. They forcefully copied the Kabuto Zecter, creating the Dark Kabuto Zecter, intending to have a powerful force of their own. During this moment, Tendo appears and uses Clock Up to rescue his mimic. However, the mimic escapes once again, only to meet Mishima once more. As Mishima transforms into Gryllus Worm, the strongest Native, Dark Kabuto charges at him and is defeated.

After Dark Kabuto is captured once again by Mishima, it is revealed that they plan to drain his power and combine it with a fragment of the Native meteorite in order to convert the entirety of humanity into Worms. As Kagami arrives that their secret lab, he is defeated by Mishima and the humans that had become Natives. During the final moments, Dark Kabuto rushes out and captures Negishi, dragging him back into the explosion as Dark Kabuto transforms into a Native. He tells Tendo that he is leaving, and it is up to Tendo to protect this world now.

Kamen Rider Dark Kabuto was part of a group of reinforcement riders led by Akira Date/Kamen Rider Birth to aid the primary riders in defeating the Rock Great Leader. All the Kamen Riders got on their bikes and performed the All Rider Break attack which destroyed the Great Leader. OOO, Den-O, All Riders: Let's Go Kamen Riders

Kamen Rider Rider Dark Kabuto make a appearance with other Riders and Kaijin monsters, when Shinnosuke and Kiriko discover the knock-off versions of the Televi-Kun in an abandoned warehouse after they meet Roidmude 027.

That One! Jun Watanabe: The Identity of Child X?

Kamen RiderDark Kabuto appears with Sasword, Sasword Masked Form, Todoroki, and Ichigo, cited as examples of the costumes Jun Watanabe used. Later in the beginning of the questionnaire, when Kenichi asks which Rider Jun Watanabe is referring to, it is finally discovered that it is Todoroki.That One! Jun Watanabe: The Identity of Child X?

Kamen Rider Dark Kabuto appears with the other Kamen Riders in the Kamen Rider Kabuto video game, in his Masked and Rider Form, however this version of Dark Kabuto is very different from the normal Soji Kusakabe, as his personality and fighting style are violent, and his target is only to destroy Tendo.

Soji Kusakabe as Dark Kabuto was initially a non-playable character for the first two installments and was playable starting from OOO with no Special move.

Kamen Rider Dark Kabuto is a playable character with the other Heisei and Showa Kamen Riders in Kamen Rider Battle: Ganbaride.

Kamen Rider Dark Kabuto Masked and Rider form appears as a playable character with the other Heisei and Showa Kamen Riders in Kamen Rider Riderbout. 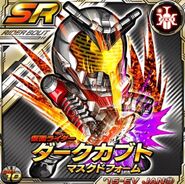 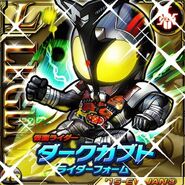 Kamen Rider Dark Kabuto in his Masked Form and Rider Form is a playable character in Kamen Rider Battle: Ganbarizing. 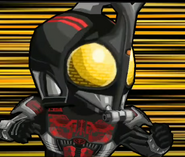 Kamen Rider Dark Kabuto appears as a playable character with others Kamen Riders in the video game, performing his Rider Kick against his enemies in Kamen Rider Transcend Heroes.

Kamen Rider Dark Kabuto is a playable character in Kamen Rider Buttobasoul, among other Riders. 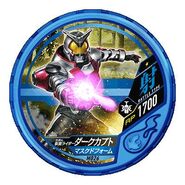 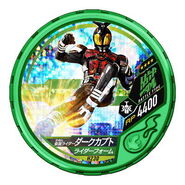 However, when Hiyori abandons him to return to the original Soji. He started to bore hatred towards Hiyori and the world itself, to the point of attacking the person he wants to protect, who betrayed him. Regardless, he still has a kind heart and at the end, protected Kabuto and Gatack from Negishi by taking the mastermind into the explosion and dying with him.

Kamen Rider Dark Kabuto's Masked Form (マスクドフォーム, Masukudo Fōmu) is a heavily armored form resembling a pupa that has very little offensive capabilities. This is the default form that Dark Kabuto transforms into, until he flips the "horn" on the Dark Kabuto Zecter, like a switch, to initiate the Cast Off (キャストオフ, Kyasuto Ofu) command.

Dark Kabuto's Rider Form (ライダーフォーム, Raidā Fōmu) is the sleeker and more offensive-based form which more resembles the Japanese rhinoceros beetle on which Dark Kabuto is named after and themed. It is in this form that Dark Kabuto has access to the Clock Up (クロックアップ, Kurokku Appu) command which allows Dark Kabuto to travel at near-light speeds to match the speeds of the Worms. By pressing three buttons on the belt in succession, Dark Kabuto can perform his tachyon-powered Rider Kick called the Dark Rider Kick (ダークライダーキック, Dāku Raidā Kikku), a roundhouse kick from a standing position.

Soji Kusakabe was actually a normal human, but that's until when he was abducted by ZECT members and used as a lab rat in order to turn him into a Native. But he escapes and use his newfound ability to create Dark Kabuto Zecter and transform into Dark Kabuto. Due to this, ZECT always try to hunt him and was used by Negishi to turn everyone into Native though he escaped thanks to Tendo. He died in this form when he tries to rescue the remaining ZECTroopers from Negishi and dragging him in to the TV studio explosion that killed both of them after he told Tendo to protect the Earth.

Retrieved from "https://kamenrider.fandom.com/wiki/Soji_Kusakabe?oldid=684661"
Community content is available under CC-BY-SA unless otherwise noted.