The Sky Cyclone flies at a tremendous speed, firing a cannon and a powerful missile in a row. It is possible to fly and attack with the automatic battle function even if Kamen Rider 4 is not operating it. Furthermore, the Sky Cyclone is able to combine with two other Shocker Fighters, which attach to its wings. It was eventually destroyed by the combined attack of the ZeroLiner Drill and Booster Tridoron.

Sky Cyclone with its wings folded. 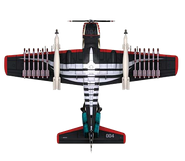 Sky Cyclone combines with two Shocker Fighters.
Add a photo to this gallery

Retrieved from "https://kamenrider.fandom.com/wiki/Sky_Cyclone?oldid=600393"
Community content is available under CC-BY-SA unless otherwise noted.