"Whether the Kamen Rider or the Skull Man, I want to draw a Manga to "frighten" the children."
―Shotaro Ishinomori[src]

Skull Man (スカルマン, Sukaru Man) is a fictional character created by Shotaro Ishinomori, first appearing in Ishinomori's 100 page one-shot manga of the same name in 1970, which was later continued by the manga artist Kazuhiko Shimamoto in 1998, and then followed by a separate storyline anime in 2007. The original Skull Man is credited as manga's first anti-hero and Skull﻿ Man's design was adapted for the creation of Kamen Rider and its characters Kamen Riders 1 and 2, with the grasshopper motif supposedly chosen by Ishinomori's son.

As homages,some characters in the Kamen Rider Series were based on Skull Man or having skull motifs:

﻿While Kamen Rider was still in development, Ishinomori created his one-shot manga as his own personal version of the TV series which was edited to avoid the dark, gruesome, and cerebral content before Kamen Rider was released.

Kazuhiko Shimamoto's 1990 "requel" manga have multiple references and homage characters of Kamen Rider. A detective named Tsuyoshi Hioka (飛岡 剛, Hioka Tsuyoshi) was pursuing Skull Man until he was captured by the manga's antagonist group, Syndicate and turned into a grasshopper mutant that looked similar to Kamen Rider ZO and J. (Hioka's face was designed after Hiroshi Fujioka). Hioka was then rescued and reconstructed by Skull Man after the Syndicate self destructed their base, and was made into a more advanced grasshopper mutant that looked similar to Kamen Rider 1. But the data used on Hioka was used for the creation of similar cyborg such as the Rider Girls who could perform their own version of the Rider Double Kick of Riders #1 and #2. Some of the mutants in the manga are also reference to the monsters such as Spider Man, Scorpion Man, Sarracenian, Chameleon Man, Bee Woman, Cobra Man and Gebacondor that were first featured in Kamen Rider.

﻿Skull Man's true identity is a young man named Tatsuo Kagura (神乐 達男, Kagura Tatsuo) who in early life was put through many experiments by his parents (and the leader of a Syndicate, Rasputin) that gave him amazing powers and skills. By the time his sister Maya (麻耶, Maya) was born, his grandfather Kogetsu Chisato (千里 虎月, Chisato Kogetsu) killed his parents and was about to do the same to Tatsuo until his future partner Garo (ガロ, Garo) rescued him and Tatsuo was adopted by the yakuza family, the Kagura Clan. Over the last 15 years Tatsuo would master his powers while on the run from a public conspiracy and uses his power to begin his quest for revenge as Skull Man. When he was saved by Garo by one of Chisato's traps Skull Man then proceeded to battle the Syndicate. Seeing himself as just a regular killer, Skull Man changed his name to Ryusei Chisato (千里 竜生, Chisato Ryusei)in order to not forget his sins by taking his grandfather's surname (a man he always hated). He is also able to communicate telepathically with Maya from their base the Tiger Moon. Upon finding out that his parents were in fact the true leaders of the Syndicate, and upon giving him the advice to take the path he believed in, Ryusei gathered people to fight against the Syndicate. 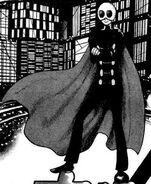 In this incarnation, Skull Man is not a person but a suit that grants the user superpowers and deadly weapons at the expense of becoming a ruthless killer. The suit was created by Tatsuo Kagura's father as a part of a religious group that worshiped it. After Tatsuo's father was killed along with presumably Tatsuo himself the suit was found and used by a priest named Yoshio Kanzaki (神崎 芳生, Kanzaki Yoshio) to combat the religious organization, Byakureikai (白鈴會, Byakureikai lit."White Bell Association") and its experiments on humans for its goals to create a new humanity assisted by a werecat and a werewolf who were experiments. When Yoshio is killed, his childhood friend and reporter Hayato Mikogami (御子神 隼人, Mikogami Hayato) takes his place as Skull Man. Hayato is highly speculated to in fact be Tatsuo Kagura, as visually and personality wise he resembles the original character, his ties to the man responsible for the fire that killed Tatsuo's father Gozo Kuroshio (黒潮 豪蔵, Kuroshio Gozo), the detective Kyoichiro Tachigi (立木 恭一郎, Tachigi Kyoichiro) guessing that Hayato could be Tatsuo, Hayato's greater control over the Skull Man suit than Yoshio, and the fact that Maya Kuroshio (黒潮 真耶, Kuroshio Maya) (based on the original Maya) revealed that Hayato is her brother. The anime series ends with the suit taking control of Hayato's body and the revelation that he is now the leader of Brain Gear called Skull (スカル, Sukaru) and an infant (probably Hayato's son) who resembles Joe Shimamura, setting up a possible precursor to the events of Cyborg 009. 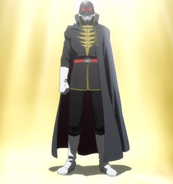 Hayato Mikogami as Skull
Add a photo to this gallery

As Tatsuo Kagura, he is portrayed as a carefree individual most of the time even as Skull Man. However, in more serious times especially as Skull Man, he is ruthless, cunning, and willing to sacrifice innocent lives in his quest for vengeance. He has however shown mercy on his grandfather when Maya revealed their origins. When it comes to eliminating enemies, Skull Man is never hesitant to kill them, seeing them as steps to achieving his goal. He is also close to his childhood protector Garo as he never leaves his side.

After almost dying from Chisato's trap, Tatsuo started to hate himself and took it so far that he changed his name to match the man he always hated. He also becomes more social to the point of forming bonds with some enemies like psychic Maria and the wasp woman Yuka Kuroki where they became his allies.

The 2007 Skull Man is much darker and brutal than the original, usually portrayed as a strong silent type and never shows hesitancy to kill others for means of his goals.

Due to the vast experiments used on him Tatsuo gained many powers. In the 1998 Manga & 2007 Anime, Skull Man is more of a weapons user than his earlier counterpart.

The most of his several abilities relate to ESP like telepathy, telekinesis, pyrokinesis, and hypnosis which he uses to take advantage over others and find their weaknesses. Skull Man also able to possesses the ability to shift his consciousness into other beings, which in turn influences the victim. 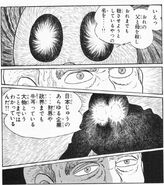 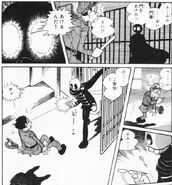 Consciousness Shifting and killing a guard with his pistol. (Ishinomori version) 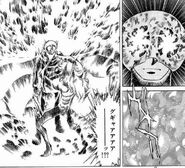 Cross Fire
Add a photo to this gallery

Skull Man's strength and agility are higher than most humans, able to hit a regular human into a machine while causing damage to said machine and evade attacks from enemies easily ,also the high-speed moving and electric shock. 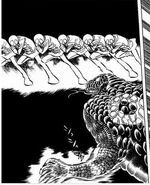 Skull Man Screw Kick
Add a photo to this gallery

In the original manga, Skull Man is an expert marksman occasionally using a pistol to kill people. In the 2007 series, Skull Man uses a larger assortment of weapons like daggers and rods.

Skull Knuckle
Add a photo to this gallery

Like a ghost, Skull Man can phase through objects in order to surprise enemies. He can absorb the energy from an explode. He also appears to be immortal, being killed or mortally wounded only to return another day.

In the 2007 anime, when the 'teeth' of the mask close, Skull Man moves at a speed so fast that everything around him freezes. This is similar to Cyborg 009 as Joe Shimamura activated his Acceleration Mode by clicking a switch on his back molar.

Maria, Ryusei Chisato's girlfriend, had became a female "Skull Woman" in the 1990 manga. 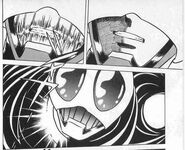 A Skull Man suit in the prologue of the 2007 series

Skull Woman
Add a photo to this gallery

Retrieved from "https://kamenrider.fandom.com/wiki/Skull_Man?oldid=543305"
Community content is available under CC-BY-SA unless otherwise noted.