Siblings, the Rescue, and Eiji Leaves

Siblings, the Rescue, and Eiji Leaves (兄妹と救出と映司去る, Kyōdai to Kyūshutsu to Eiji Saru) is the forty-first episode of Kamen Rider OOO.

After Ankh is taken back by his body, Eiji becomes resolved to bring him back even with no longer wanting Hina and Shingo involved in this battle.

Having absorbed Ankh, Ankh (Lost) finds out he is missing a Taka Medal, which Ankh gave to Hina prior to being absorbed. Eiji is forced to become Kamen Rider OOO Putotyra Combo to fight the Greeed, realizing there is still a chance to save Ankh when he senses his presence. When Ankh (Lost) realizes this as well, he is forced to fall back. Eiji sends a Taka Candroid to keep an eye on him. Eiji and Hina return the Cous Coussier, after Chiyoko gives it a Greek motif, with Shingo greeting the two and revealing that Ankh hid the O Medal Holder full of all of the other Core Medals. Furthermore, Shingo has decided that he will help Eiji out just as Ankh did. As Shingo practices flinging Core Medals Eiji's way, able to think up Random Combos, Kougami watches as he feels the situation with Ankh may worsen Eiji's use of the purple Core Medals. Meanwhile, as Ankh (Lost) is having trouble completely absorbing his other half, Doctor Maki arrives and decides to take advantage of Eiji without Ankh by creating the Ankylosaurus Yummy. At that time, seeing how happy Hina and Shingo are, Eiji thinks that there is no more need for them to get caught up in all this and resumes his life as a wanderer. As dawn comes, after the Candroids pinpoint where Ankh (Lost) is, Eiji finds Shintaro waiting for him as he joins in the Ankh rescue operation. However, the two are stopped in their tracks by the Ankylosaurus Yummy, and they assume their Kamen Rider forms to fight him. However, without Ankh, Kamen Rider OOO is unable to switch Combos and he is defeated. With Kamen Rider Birth holding the Ankylosaurus Yummy off, Eiji crosses paths with Maki. Maki tells him that Ankh is beyond saving and that he should be more worried about the five purple Core Medals in Eiji's body as they resonate with his own. 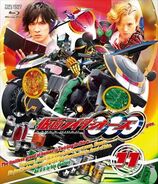 Retrieved from "https://kamenrider.fandom.com/wiki/Siblings,_the_Rescue,_and_Eiji_Leaves?oldid=645453"
Community content is available under CC-BY-SA unless otherwise noted.