For the worm that copied his memories in Zi-O, see Shun Kageyama (Zi-O).

He, for most of the series, operated as Kamen Rider TheBee, acquiring the TheBee Zecter after Arata Kagami relinquished it. Prior to it, Shun was originally under So's command and a good friend of his, believing deeply in his superior's philosophy of teamwork and "Perfect Harmony" (完全調和, Kanzen Chōwa). After TheBee Zecter rejected Sou and chose Arata, Shun attempted to make Arata understand his new responsibilities. He was baffled when Arata rejected TheBee Zecter in favor of his friendship with Soji, whom he developed a grudge against.

Becoming the new leader of Shadow, Shun turned his back on Sou and used many methods that contradict his former mentor's beliefs of "Perfect Harmony", Soji saw Shun unfit to be a leader. Overtime, Masato Mishima also sees Shun as being unable to handle the missions assigned to him. Eventually, Shun is defeated by a vengeful Yaguruma who relieved him of the TheBee Zecter which ended up in Tendo's possession. No longer qualified as TheBee, Shun was ousted from ZECT and Shadow for his repeated failures. Kageyama becomes Tendo's assistant in order to get TheBee Zecter from him but failed. Later Rena Mamiya hired him to kill Daigo Tachikawa in exchange of stealing TheBee Zecter from Tendo. Shun eventually accepted the deal and going to kill Daigo in order to become TheBee once again. The ZectTroopers try to stop Shun, but Shun does not care about his betraying ZECT and only wants to become TheBee. He eventually attacked by reinforcement of ZectTroopers, Reina said that Shun was failed and order Salis Worms to kill him. Kageyama being facially scarred battered and broken in both body and mind. After being beaten he is saved by Sou, who once again invites Shun to hell, this time giving him his own Hopper Zecter as a present which allows him to transform into Kamen Rider PunchHopper. Now under Sou's wing, he refers to him as "Aniki" (Brother or boss).

Once their partnership formed, both Shun and Sou set out for revenge against Kabuto by ambushing him and Gatack within an abandoned factory. Kick and PunchHopper demonstrate their new abilities, easily defeating Kabuto and Gatack in a matter of minutes after the two were weakened by the activation of the 'Red Shoes' system. Unlike Sou, Shun is not completely into the darkness yet and Sou often corrects his way of thinking whenever Shun shows signs of 'reaching the light'. This is first shown when he tries to grab onto a bit of light after meeting a young girl who he defends from Leptophyes Worm. Yaguruma tells him that his way of thinking is wrong and even the slightest bit of light will destroy them. After discovering the girl Shun saved early had become a Worm, PunchHopper along with KickHopper annihilate the Worms together, and they manifest in their own power. Shun once again questions the value of the light, but Yaguruma tells him that they live in a world of darkness and that he should not seek the light.

Shun works with Sou in an attempt to destroy a confused and weakened Rena Mamiya during episode 40, in hopes of eliminating her early. Their attempt almost works, but Rena is saved by Kamen Rider Drake along with Gon, who distracts them, allowing their party to escape. Their plan did have a side effect, however, resulting in a recovery of Rena's Worm memories. Shun later asks So why he didn't kill her, and an extremely happy Yaguruma answers by saying that he has indeed taken a liking to her. Even more so, So protects Rena from Subst Worm when she is endangered. This led to an infuriated Shun, as it went against their beliefs of abandoning the light. So is shocked, however, when he gets rejected by the Uca Worm, his bond with Shun is restored.

During episode 41, Shun and Sou defeated Tsurugi, and through depressed, Tsurugi is offered into joining them. The trio then eventually encounters Reiji Nogi who makes short work of them using "reflect" to use all their Rider Finishers against them. Shun and Sou watch as Reiji Nogi advances on Area Z during episode 44, and Shun wants to help them fight, but Sou laughs at him for trying to be an ally of justice. Shun reverts to his old self briefly and picks up the abandoned TheBee Brace, until after he was defeated by Reiji Nogi. Ultimately, he returns to his old style and becomes PunchHopper again. Shun also follows Sou's way of regaining the darkness by binding himself with chains. He ignores Soji's request for help, stating that he will not help humans. Along with PunchHopper, KickHopper defeats Cassis Worm Clipeus in episode 46. The two Hoppers utilize the Rider Jump function to send Cassis Worm flying into the air, destroying him with a Rider Kick and Punch as he falls down.

Shun later becomes one of the many looking for the Worm identification necklaces, believing them to be useful in his mission. Upon seeing Shun with a Worm identification necklace, Soji warned him about the side effects of the necklaces but failed. In episode 48, Shun tells Sou that he has become a Native and can no longer control himself due to the fact that having three Native necklaces sped up his transformation. As a show of pity, Sou used a Rider Kick to end Shun's suffering. As Shun dies in So's arms, So mentions that after all they've gone through, the two will always be partners and they will look to the light for a new future.

Shun Kageyama appears in Kamen Rider Decade episode 2 with his partner KickHopper appear in the World of Kuuga during a dimensional distortion caused by Narutaki to fight Decade. 「The World of Kuuga」

at the beginning of the episode Kamen Rider PunchHopper with KickHopper However, they start focusing their rage on Kuuga,but later Narutaki causes another dimensional distortion that sends the two to another world where Kamen Riders Delta and Tiger appeared to be waiting. 「Transcendence」

Kamen Rider PunchHopper was part of a group of reinforcement riders led by Akira Date/Kamen Rider Birth to aid the primary riders in defeating the Rock Great Leader. All the Kamen Riders got on their bikes and performed the All Rider Break attack which destroyed the Great Leader. 「OOO, Den-O, All Riders: Let's Go Kamen Riders」 It is unknown whether this PunchHopper is the A.R. World version or the revived original version from the main series.

Kamen Rider PunchHopper appears as a toy, when Sento and Sougo they find Ataru he brings them to his room which is filled with Kamen Rider memorabilia, with Sougo and Sento stunned to see toy versions of themselves. Ataru reveals that Kamen Riders are fictional.

In 2019, a meteor crashes on Earth and the Salis Worms began to attack and copy the appearances of humans. One of the Worms copies the form of the deceased Shun Kageyama, whose memories are exactly the same as the original. He also has the Hopper Zecter to transform into PunchHopper. Also the original Shun Kageyama was mentioned by So Yaguruma and Arata Kagami.

Shun Kageyama and So Yaguruma are mentioned by Natsumi Hikari talking with Yusuke and Tsukasa of Riders' personal vehicles, saying that if Daiki Kaito continues to sulk, he will end up joining the Hell Brothers.「Petition! Diend Super Machine Legend!!」

Kamen Rider PunchHopper appears to enter in International Cuisine Restaurant Cous Coussier, interrupting the fight between Eiji Hino and Ankh. Kivat-Bat the 3rd explained the history and origins about the hell brothers and how Shun Kageyama went to hell in bottomless despair and also compared Eiji and Ankh as both KickHopper and PunchHopper. 「Type11. - Anyway, We Do Like Hell!」

Kageyama as TheBee in Masked Form

Kageyama as TheBee in Rider Form

Shun, alongside Sou, are unlockable characters after the game is cleared in All Kamen Rider: Rider Generation 2.

Kamen Rider PunchHopper appears as a playable character with the other Heisei and Showa Kamen Riders in Kamen Rider Riderbout.

Kamen Rider PunchHopper appears as a playable character with others Kamen Riders in the video game, performing his Rider Punch against his enemies in Kamen Rider Transcend Heroes.

Kamen Rider PunchHopper appears as a playable character in this trading card game with other Kamen Rider Heisei-Era, Showa-Era, Super Sentai, Metal Heroes, and other Heroes.

Kamen Rider PunchHopper appears with other Kamen Riders and Monsters in Battle Spirits.

When he was initially introduced, Shun was a person who looked up to his superiors completely with sincerity and viewed the one with TheBee Zecter as a great person. However, due to So Yaguruma betraying his Perfect Harmony for the first time and Arata's self defect from being Shadow Troopers leader, Shun's heart was tainted, as he views them as incompatible and deemed them inferior than him. Ironically, Shun is clearly seen to be further inferior than them when judged by Soji Tendo.

During his time as TheBee user, Shun had become arrogant and selfish and also showed his incompatibility to be TheBee user and as the leader of Shadow. Shun was not able to lead his group completely and mostly took effort on things that benefited himself only. During his period as TheBee, he was a mad person who greatly wished to be viewed a worthy by Masato Mishima and did every way to be TheBee as he deemed that TheBee is the best to be with him. Unlike Yaguruma, Kageyama does not care about lives of other people including used Kagami as a lure to find the Worm, a method that Tendo highly criticized.

After Shun's downfall, Shun became a spoiling partner towards So after he had become PunchHopper. Unlike So, Shun was not completely under the darkness and still wanted to gain the light to live again. This personality might have affected So in the end, as So soon decided to bring back the light only for them again.

Masked Form (マスクドフォーム, Masukudo Fōmu) is TheBee's strong, heavily armored, but less offensive form resembling a beehive. This is the default form until the rider rotates TheBee Zecter around the wrist to initiate the Cast Off command.

Rider Form (ライダーフォーム, Raidā Fōmu) is TheBee's sleeker, faster, and more offensive form which resembles the wasp motif. In this form, TheBee can initiate the Clock Up command to travel at near light speeds match the speed of Worms. By pressing a button on TheBee Zecter, the Rider Sting (ライダースティング, Raidā Sutingu) tachyon-powered punch is activated, allowing the user to pierce through a Worm with the stinger on the TheBee Zecter.

Unlike all of the other Riders in Kamen Rider Kabuto, the Kamen Rider Hopper Series Riders only have one form that they transform into. Kamen Rider PunchHopper (仮面ライダーパンチホッパー, Kamen Raidā Panchihoppā) has a black Acrida cinerea motif and by raising the legs on the Hopper Zecter (ホッパーゼクタ, ーHoppā Zekutā), PunchHopper can jump high into the sky. By lowering the legs on the Hopper Zecter, the energy is concentrated into a tachyon-powered Rider Punch (ライダーパンチ, Raidā Panchi). The impact upon landing on the ground again powers up another punch.

The special team known as Shadow (シャドー, Shadō) assists Kamen Rider TheBee. Unlike regular ZECTroopers, they have yellow pin stripes on their uniforms. Shadow is able to prevent the Worms from molting, enabling TheBee to kill them.

This form is exclusive to Kabuto Epsiode 10. 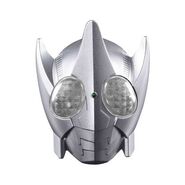 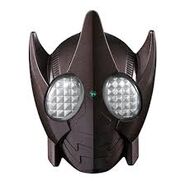 , one of the human hosts of Ultraman Nexus

, who was also a J-hero with multiple users. As Kamen Rider PunchHopper, his suit actor was Naoki Nagase (永瀬 尚希, Nagase Naoki).