"I'm going to try... Even if I don't know what I can do."
―Shuji after destroying the Stag Beetle Orphnoch[src]

This article is about the main user of the SB-333 Delta Gear. For other users of the Delta Gear, see Kamen Rider Delta

After Rina was hit by a truck retrieving the Delta case he had thrown into the street, he resolved to stop running and fight alongside the others.

Takumi then found and helped Mihara and Rina by transforming into Kamen Rider Delta and fought an Orphnoch attacking them. However he faints soon after and Rina tries to show compassion, with Mihara having doubts from Kusaka. When he woke, he then decides that he would rather die than become Smart Brain's ally.

Mihara finally decides to enter the battle with the Orphenochs as Delta and appears as Kusaka begins to battle the rest of Lucky Clover. Sawada dies as a result of his battle with Kusaka. As the story comes to a close, Takumi seems to have made the decision to fight alongside Kusaka and Mihara as Faiz. The three riders transform to fight Orphenochs. Later, Mihara is seen reuniting with Rina in the hospital.

Mihara and Kusaka appears fight against Crab Orphnoch. A few moments later, Takumi transforms to Faiz protect the Orphnoch and fights Kaixa and Delta, but despite Faiz's interference, the Crab suffered a breakdown and died. Masato argues with Takumi for protecting the Orphnoch, causing Mihara trying to stop the fight.

After being mortally wounded by Faiz, Kaixa, and Delta's attacks, Murakami offers his life to the Orphnoch King. Smart Lady arrives summoning Kusaka and Takumi to Smart Brain Headquarters to meet the new President. Along with Mihara, they are shocked to discover that is is Kiba. Kiba catches up with Kaidou,Takumi, Kaido, and Mihara kill all Riotroopers as Faiz Axel Form, the Snake Orphnoch, and Delta respectively. With Kusaka killed by Kiba as Kaixa

Later, Takumi was saved by the combined efforts of Keitaro, Mari, Kaido (who found out from Kiba and told the others), Mihara, and Rina before being confronted by Kiba again. Both he and Kiba then have one last battle that involved their powers as Faiz and Kaixa and Orphnochs. Takumi is able to claim victory as he spares Kiba's life because he said that he is "human". With a renewed sense of living, Kiba agrees to help Takumi and Mihara take down the King using the power of the three Gears. The fight doesn't go so well when the Kaixa Gear is destroyed. Before Kiba died, Faiz managed to land a hit on the King, defeating the King and killing Kiba. After the series, Shuji, Mari, and Rina were the only surviving members of Ryusei School as now that Shuji along with Rina had run the orphanage which had previously been run by Smart Brain.

Delta reappeared with Kamen Rider Tiger as shadows in a dimensional distorion caused by Narutaki to take KickHopper and PunchHopper out of the World of Kuuga. Judging from KickHopper's comment "Another hell awaits.", it can be assumed that the two Riders were waiting to fight them. Transcendence

Kamen Rider Diend summon Kamen Rider Drake and Delta to fight the Gurongi,later Diend uses Cross Attack to ambush Kamen Rider Exceed Gills but interfere Tsukasa, Decade tries to protect him, only to have his belt stolen by Gills with no defense against Diend's summoned Delta's Lucifer's Hammer finisher at the end of the episode. Reunion: Project Agito

After Yusuke saves Tsukasa from Delta's attack, Gills is about to fight when he is overcome by pain when the Taurus Ballista ,Formica Regia and Lords appears to try to kill him,easily defeating Kamem Rider Drake and Delta. Awakening: Tornado of Souls

In the special version of episode 31, Kamen Rider Delta is seen as one of the many Kamen Riders who fought in the Rider War against Decade and were all destroyed. They were presumably restored after the destruction (and subsequent revival) of Decade at the end of the Rider War and the worlds were restored. The Destroyer of Worlds

Kamen Rider Delta was part of a group of reinforcement riders led by Akira Date/Kamen Rider Birth to aid the primary riders in defeating the Rock Great Leader. All the Kamen Riders got on their bikes and performed the All Rider Break attack which destroyed the Great Leader. OOO, Den-O, All Riders: Let's Go Kamen Riders

As mentioned by Kamen Rider 4, Takumi and all of his friends (except Naoya Kaido) died after the final episode of Kamen Rider 555. Shuji is hypothetically mentioned as one of the casualties.

Kamen Rider Delta appears as a toy, when Sento and Sougo they find Ataru he brings them to his room which is filled with Kamen Rider memorabilia, with Sougo and Sento stunned to see toy versions of themselves. Ataru reveals that Kamen Riders are fictional. Kamen Rider Heisei Generations FOREVER

Kamen Rider Delta is playable along with Faiz , Kaixa and Some Orphnochs in the Kamen Rider 555 video game.

Kamen Rider Delta is an unlockable and playable character with the other Kamen Riders in Super Climax Heroes.

Shuji Mihara as Kamen Rider Delta, appeared as an unlockable character in this game. His Rider Finisher Atack is by calling Jet Slinger and shot his opponent with its missiles.

Kamen Rider Delta card
Add a photo to this gallery 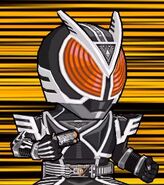 Kamen Rider Delta is playable character with other Kamen Riders of Heisei and Showa Era and monsters.

Kamen Rider Delta appears with other Kamen Riders and Monters in Battle Spirits.

Shuji is a complete amateur in terms of fighting. This disadvantage affected him to be the weakest fighter among the trio riders despite wearing the strongest Rider Gear to be ever made. During fights, he never composed and too rushed on landing his attack. Delta Gear's strength, however, was able to protect Shuji well enough to let him survive in any fight.

He is a relatively cowardly member of Ryusei School who would rather forget about Orphnochs and go back to living a normal life. But Shuji is not a person who prefer to betray friends and when the Delta Driver was in the Ryusei School's group, it become his ultimate chance to help his friend. It is possible that Shuji's pure heart to help friends despite his cowardice has rendered himself from taking the side effect of Delta Driver. 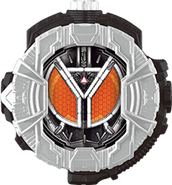 Delta Ridewatch
Add a photo to this gallery

Retrieved from "https://kamenrider.fandom.com/wiki/Shuji_Mihara?oldid=558982"
Community content is available under CC-BY-SA unless otherwise noted.