"I can do whatever I want, for however long I want! Is there any greater prize than that?"
―Kitaoka on his wish for immortality[src]

Shuichi Kitaoka (北岡 秀一, Kitaoka Shūichi) is Kamen Rider Zolda (仮面ライダーゾルダ, Kamen Raidā Zoruda, Masked Rider Zolda), a character in the tokusatsu production Kamen Rider Ryuki. He is the fourth of the 13 Kamen Riders the story revolves around. However, he served as the third main Rider in the series.

He is a self-proclaimed "Super-lawyer", tends to only help someone if he has something to gain. Because he has a terminal case of cancer and was given only several more months to live, Kitaoka accepted Kanzaki's offer to join the Rider war. His prize is to be immortal so that he could continue his extravagant lifestyle. Because of his illness, he suffers from frequent dizzy spells and fainting.

He first meets Shinji Kido after he clears the Sakura Company of its credit fraud charges and is later pursued by its bookies after taking their dirty money as added payment for his services. Though Shinji was unaware of this at first, he attempts to save Kitaoka only to be rescued by his apprentice Goro Yura. Shinji later meets Kitaoka again when he and Reiko wanted permission from the Kawazu Pharmacy to inspect their factory for environmental violations. Interested in Shinji, Kitaoka allows Shinji to hang around with him and understand his ideology until Shinji hit a nerve of Kitaoka's thought to live for one's own desire seemed hollow made Kitaoka kick him out.

Later, after attacking Kamen Rider Ryuki just as Ryuki kills a Zebraskull, Kitaoka learns that Shinji is in jail for suspected kidnapping and agrees to help him on the condition that Reiko writes a special article to boost his positive image. However, learning that Shinji's Ryuki with seeing the wound he inflicted in their fight, Kitaoka goes to Atori Cafe to get his pay from Ren. However, when a Wildboarder attacks, Kitaoka exposes himself while learning that Ren is a Rider - Kamen Rider Knight - as well. After fighting him, Kitaoka questions Ren's reasons for not killing Shinji. Kitaoka had intended to frame Shinji for kidnapping but after being fired as Shinji's lawyer when his intentions were revealed, Kitaoka is annoyed that Shinji is freed because of a girl named Yukari whom he brushed off while refusing to aid her. But after learning that her mother is hospitalized, Kitaoka secretly pays for her mother's surgery and earns the girl's respect. However, Zolda manages to sneak attack Ryuki and Knight while they were fighting the Wildboarder with Magnugiga, killing the monster while giving Ren memory loss in the overkill attack.

Kitaoka later gives Goro use of Zolda for a while to conceal himself, until get sets up a scheme of having Shinji believe he accidentally killed Goro to have him quit being a Rider. But his arrogance of barring ORE from a press conference to spite Reiko led to her helping Ren expose the lawyer as the real Zolda. After bailing out the son of one of his clients, Jun Shibaura, Kitaoka drops his long time client Takeshi Asakura out being tired of the man's attitude, leading Asakura receiving aid from Kanzaki. Eventually the two found out they were both Riders and they began a personal feud against each other. Though Shinji would attempt to warn him of this while under the effect of Kamen Rider Odin's Time Vent, Kitaoka faked helping Shinji and later states that fulfilling his wish to win the Rider War is more important than Asakura staying behind bars.

As the war goes on, Kitaoka becomes weaker and weaker. He begins to have doubts whether he can truly win the war. He also grows to care for Shinji, unwilling to fight him when he saw that, while Shinji requested to fight, his heart wasn't in it.

"The weather is so bad today. I can't see your face clearly anymore, Goro."
―Kitaoka's last words before passing away[src]

Kitaoka was the only Rider to voluntarily give up the fight rather than be killed, realizing that while his life was a short life, it was a good one. While he died in peace at his home, Goro went to fight against Ouja in his place as Zolda; Goro, not used to Zolda's long-range style, died with Asakura learning too late that he is denied taking Kitaoka's life himself. After Kanzaki restored time to its proper course after Yui's death, Kitaoka and Goro were both given a second chance at life, though it was never revealed if Kitaoka still has cancer or not. Although in Rider Time: Ryuki, it is implied by Goro that Kitaoka still has cancer and eventually passed away, hence why Goro becoming Zolda in place of Kitaoka.

Zolda, Knight and Ouja fighting the rest back. They apologize for being late; when Ryuki accuses Ouja of being a villain, they all claim that as Kamen Riders they are the protectors of humanity, all completely out of character. They rush in to keep fighting the Monsters as Ryuki stands in confusion, but he eventually joins in. As they fight the monsters down, explosions knock them all back, and the mysterious figure appears, named by Knight as Kamen Rider Agito, and by Zolda as the ruler of the "Miracle World". Burning Agito attacks them with fire before a gold figure jumps in, introducing himself as the real Kamen Rider Agito, saying Burning Form is a Miracle World illusion. The five Riders strike a pose and rush forward to fight the Fake Agito and his Mirror Monsters. the real Agito appears in Ground Form and teams up with Kamen Rider Ryuki, who imitates Agito's Rider Kick to destroy the imposter. In the end, this is revealed to be Shinji's dream.

In the special version of episode 31, Kamen Rider Zolda is seen on top of Zero-Liner, using his Final Vent against Decade's Final Attack Ride. They were presumably restored after the destruction (and subsequent revival) of Decade ended the Rider War and the worlds were restored. The Destroyer of Worlds

Kamen Rider Zolda was part of a group of reinforcement riders led by Akira Date/Kamen Rider Birth to aid the primary riders in defeating the Rock Great Leader. All the Kamen Riders got on their bikes and performed the All Rider Break attack which destroyed the Great Leader. OOO, Den-O, All Riders: Let's Go Kamen Riders

An iteration of Shuichi Kitaoka/Kamen Rider Zolda was selected to join Team Ex-Aid, formed and led by Emu Hojo to fight for the title of Kamen Sentai Gorider in the Chou Super Hero Taisen tournament. Facing the Dairangers

. Ultimately, Team Ex-Aid faced off against Team Genm, led by Kamen Rider Genm Zombie Gamer Level X, in the final round. Zolda engaged and defeated Kamen Rider Ryugen, with the team prevailing as Ex-Aid bested Genm. Upon completing the tournament, Zolda became Mido-Rider, as Team Ex-Aid were granted the form of Kamen Sentai Gorider, allowing them to use the Rider Hurricane together to destroy the Andor Genesis mothership. Their objective achieved, Momotaros and the other Game World teammates returned to their card forms and left while Emu's Aka-Rider transformation reverted to Robot Action Gamer Level 3 as he was left to face the Chou Shocker Taisen.

During the final battle against the Shocker army from the Game World, Kamen Rider Brave, who had acquired the cards from his Game World counterpart, summoned Ex-Aid's teammates again to back him up in his fight against the Oogumo Great Leader. Unfortunately, the quartet did not last long before being defeated, however, Ex-Aid would ultimately vanquish Shocker Leader III alongside the Kyurangers

Kamen Rider Zolda appears as a toy, when Sento and Sougo they find Ataru he brings them to his room which is filled with Kamen Rider memorabilia, with Sougo and Sento stunned to see toy versions of themselves. Ataru reveals that Kamen Riders are fictional. Kamen Rider Heisei Generations FOREVER

"You..I remenber you were a Kitaoka's lackey"
―Takeshi Asakura Works to Goro as Zolda[src]

Shuichi Kitaoka is only mentioned by Takeshi Asakura when Kamen Rider Zolda appears believing it was but in reality is Goro, Asakura with his memories he says to Gora that he is Kitaoka's butler. Advent Again

Kitaoka is mentioned, when Asakura account that was Kitaoka's enemy. He thought that Kitaoka may "turn in his grave" should he know Goro was his servant. Asakura admitted he had never actually hated Kitaoka, but it was Kitaoka who hated him. He then remarked that "Hatred is a thing that you can trust". Another Alternative

Kitaoka is last mentioned by Goro that, in reality, he keeps all his memories all this time. Goro and Asakura died from the final attack that they launched at each other disappearing from the mirror world, so Goro finally fulfilling the will of his master Kitaoka. Alive A Life

Kamen Rider Zolda appears with other Kamen Riders and Monsters in Battle Spirits.

Shuichi is a flamboyant, playboy, cunning, and a clever person. As a lawyer, his fame of that he is an ultimate lawyer is not a hollow words as many people he helped always escaped the prisoning sentence, either they are good or bad. He even able to do the otherwise, as proved when he managed to put Shinji to the law prison instead of saving him.

If no one able to understand Shuichi completely, Shuichi is easily deemed to be the worst person ever to live before Asakura. Despite his worst person, Shuichi still has a heart to save people, especially when they were suffering. But he won't show his good intention directly and only Goro who knows about it. On saving people as a lawyer, Shuichi is not only choosing over money, but also counting on how many times and the report he received on the person he will aid as seen as he helped Jun Shibaura, but not Asakura.

Shuichi's wish on becoming immortal is not his actual wish, as his truly wish is that he won't die from his cancer because he feared of it and felt tortured.

Shuichi is an expert on long range fight. His personality and intellect are perfect to use Zolda's power which purposes to deal a heavy damage from a long distance. Shuichi always calculate the best use of his vent card to attack his target so the explosive effect won't even injuring him, as revealed when he cancelled his Final Vent because it causes a great collateral damage when his opponent outsmart his move by going closer to him.

Kitaoka can transform into Kamen Rider Zolda using his Advent Deck and V-Buckle upon forming a contract with Magnugiga. His Visor, the Magna Visor (マグナバイザー, Maguna Baizā), is a submachine gun that also functions as his personal weapon. Zolda's punching power and kicking power are equal and of decent strength, but his jump height and running speed are the lowest among all of the 13 Riders. To compensate for his lack of agility, Zolda employs an exclusively long-ranged fighting style.

By using his Final Vent, Zolda can execute his finisher, the End Of World (エンドオブワールド, Endo Obu Wārudo), in which Magnugiga appears in front of Zolda and he inserts the Magna Visor into its back. Magnugiga then deploys all of its weapons, which Zolda fires all at once by pulling the trigger of the Magna Visor. The resulting barrage destroys both the target and the surrounding environment.

Mido-Rider is composed of the following parts: 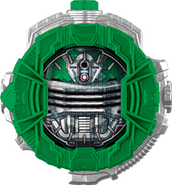 Retrieved from "https://kamenrider.fandom.com/wiki/Shuichi_Kitaoka?oldid=537587"
Community content is available under CC-BY-SA unless otherwise noted.