Shocker OOO (ショッカーオーズ, Shokkā Ōzu) is an artificial Greeed based on Kamen Rider OOO, appearing in the Kamen Rider OOO S.I.C. Hero Saga story, Kamen Rider OOO: OOZ, after the Shocker remnants captured Eiji Hino and used the data of OOO along with the Medals of the revived Shocker Greeed, and the newly created Gel Shocker and Destron Greeed.

Using data from OOO, the Shocker scientists created the Shocker OOO to more properly harness the powers of the Core Medals after their Greeed are destroyed by OOO and Riderman. It is mainly colored Gold, Silver, and Bronze. 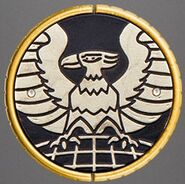 Shocker Medal
Add a photo to this gallery

Retrieved from "https://kamenrider.fandom.com/wiki/Shocker_OOO?oldid=562228"
Community content is available under CC-BY-SA unless otherwise noted.