80 (Kamen Rider)
2 (OOO)
1 (Fourze)
5 (Movies)
8 (Specials)
Full list of appearances
The Shocker Combatmen (ショッカー戦闘員, Shokkā Sentōin, 1-80) are troopers used by Shocker in their goal for world domination. While some are slightly modified humans, others are said to be creations of the Shocker Leader who are not really alive but puppets that follow every command of him.

Throughout the series, the Shocker Combatmen are slowly enhanced with time, with their final version proving much stronger than their original counterparts. However, extremely skilled individuals such as Kazuya Taki and Tobei Tachibana are still shown capable of defeating them in battle, with Gel Shocker's Combatmen also far outclassing them in overall capabilities.

Shocker Combatmen also appear in the Kamen Rider Decade series and movies, along with with the Let's Go Kamen Riders movie.

The first brand of Shocker Shocker Combatmen were people dressed in black clothing and berets with red scarves and a belt with Shocker's insignia. As the series moved on new types were introduced. When the Shocker commander Sabotegron arrived the iconic image of Shocker Combatmen still seen today, people dressed in black clothes and wearing gray makeup, wearing masks similar to Lucha libre fighters, that have an insignia on the forehead, while the more elite Combatmen had red designs to their normal black clothes. The most recognizable costumes are the Combatmen in black clothes with white spine and ribcage designs on the shirt and a mask with the Shocker emblem.

All Shocker Combatmen give out a "Yee!" cry, which is usually the most they say. They also occasionally use this cry with the "Sieg Heil" salute used by WWII Nazis. Dai-Shocker and Super Shocker's Combatmen have the special ability to transform into missiles to attack enemies.

When Shocker merged with Geldam to become Gel Shocker, the Shocker Combatmen were replaced by the Gel Shocker Combatman (ゲルショッカー戦闘員, Geru Shokkā Sentōin). They wore bright purple and yellow costumes, covering their entire bodies from head to toe. Aside from the Shocker Combatmen' standard disguise abilities, they were also capable of traveling from one place to another by transforming into sheets that would drop down onto unsuspecting victims and turning themselves invisible. This version of Combatmen also was physically superior to their predecessors, able to take more blunt violent abuse without lowering combat performance.

In episodes 27 and 28 of Kamen Rider OOO (which were incidentally the 999th and 1000th Kamen Rider episodes), a Shocker Combatman named In Sendo appeared who had a long grudge against the Kamen Riders for always defeating his comrades. But he was not entirely evil as he saved Eiji Hino from falling crates and later realized he was only being used as a pawn by Kazari to create the Ikajaguar Yummy. The soldier's desire for strength in numbers allowed the Yummy to duplicate itself into a small army of various Combatmen, but he became disillusioned upon discovering that these were merely made of medals.

A trio of Shocker Combatmen was seen fighting Rider 1 in old recorded video footage that Tomoko Nozama found on the internet, along with other clips of past Kamen Riders, who are now known as urban legends. [Space Superiority]

The Shocker Combatmen served as a secondary foot soldier force for the Underground Empire Badan. They were all defeated by the 15 Heisei Riders and 15 Showa Riders when they united to take down Badan. [Heisei Rider vs. Showa Rider: Kamen Rider Taisen feat. Super Sentai]

A force of Shocker Combatmen fought alongside a batch of Hitokarage

as part of a combined Shocker/Roidmude/Yokai

army led by Shocker Buruburu/"Dr. Dee" with Roidmude 076. They were ultimately all destroyed by the combined power of Kamen Riders Drive and Mach alongside the Ninningers

A near-endless force of Shocker Combatmen spans the globe in a rewritten history created by Shocker's History Modifying Machine. They are part of the Shocker army which is destroyed in the final battle with the Kamen Riders. [Super Hero Taisen GP: Kamen Rider 3]

In the resulting twisted timeline of time loops, the Shocker Combatmen served as pilots of the Shocker Air Force, led by Kamen Rider 4 in his Sky Cyclone, which was all destroyed by Booster Tridoron and ZeroLiner. [D-Video Special: Kamen Rider 4]

A pack of Shocker Combatmen was called by Yamaarashi-Roid, who was working to revive Jigoku Taishi, to back him up against Takeru Tenkuji and Yamato Kazakiri

, only to be destroyed by Ghost Grateful Damashii and Zyuoh Eagle's respective swords. [Appearance! The Mysterious Warrior!]

A pack of Shocker Combatmen was among the Shocker army of the Game World led by Shocker Leader III, the boss of the Chou Shocker Taisen bonus stage. The army was ultimately wiped out by a combined force of Kamen Riders and Sentai Rangers

Combatmen were part of the endlessly reviving army of Shocker in the amusement park Game World. [Maze 1: Emu, is dead?] Emerging as a result of Kuroto Dan's plot to revive himself, they would persistently attack, no matter how many times defeated, the Kamen Riders he had gathered for this purpose. [Maze 2: Escape] Once the Game World was destroyed by Kazuma Kenzaki's Joker Undead power, the Shocker army was assembled one last time under Kamen Rider Genm Zombie Gamer and Totema, but was ultimately wiped out by Kamen Rider Ex-Aid Maximum Gamer Level 99 and the second Kamen Sentai Gorider. [Maze 3: Gorider Forever]

Due to Shocker's defeat all over the world, its Combatmen were now leaving it and settling at different occupations. One of them was an unnamed Combatman who met Sougo Tokiwa/Kamen Rider Zi-O and was discussing idleness in the society. Later, a Time Shocker Combatman with Future Note from 2068 A.D. arrived in 2019 A.D. and revealed that the same Combatman destined to become Ohma Shocker and help Shocker rule the world. However, both Ohma Shocker and the future Combatman were defeated by Zi-O, Geiz, and Woz.

The Shocker Combatmen appeared in Shotaro Ishinomori's original Kamen Rider manga. Unlike their live-action counterpart, they wear helmets partially concealing their faces and are equipped with machine guns.

Kamen Rider The First & The Next

The Shocker Combatmen appear in both reboot films Kamen Rider The First and Kamen Rider The Next, serving as Shocker's henchmen. They wear black clothes with white ribcage design, similar to their original TV series counterpart in addition to their gas masks.

The Shocker Combatmen appear as the grunts of Shocker which is fought by the six Kamen Riders 1, 2, V3, X, Amazon, and Stronger in Kamen Rider Club.

The Shocker Combatmen appear as grunts in the Super Famicom Kamen Rider game. 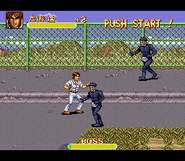 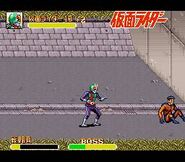 The Shocker Combatmen, along with Gel Shocker Combatmen, appear in the PlayStation Kamen Rider video game. A group of six Combatmen is fought by the player in the "Kamen Rider Story" before fighting a Shocker or Gel Shocker monster. In the "Shocker Story" where you play as a monster, you can upgrade to Saikyō Kaijin with the ability to summon six Combatmen or 3 Combatmen if upgrade punching power, kicking power or both. They are used to hurt the Rider 1 before facing the player when all of them are defeated.

The various iterations of the Shocker Combatmen appear as minor-enemies in the game, the types differing by era despite having no true differences in strength. Kamen Riders 1 and 2 fight the Black costumed Combatmen in 1971, while V3 fights the red-costumed variety in 1973. In 1988, Kamen Rider Black battles Gel Shocker Combatmen, while Kamen Rider Agito battles the more traditional black and bone pattern Combatmen in 2004. All four varieties of CombatmenComb dissolve into green liquid upon being defeated.

Shocker Combatmen appear as Common Enemies in the video game Kamen Rider Battride Wars. Kamen Rider: Battride War Genesis features Takeshi Hongo in a Combatman disguise as a playable "joke character", who can be obtained with a download code contained in the game's first print run.

Shocker Combatmen appear when there are citizens on items. Unlike other games, this Shocker Combatman shows a more caring personality. When the Combatman scares the citizen for a while, it starts to frown.