He was one of the military personnel guarding the GA psychic educational facility during the time it was attacked by the Formica Pedes. Though he would survive the ordeal, he would be left a jaded man.

With his pride as a soldier shattered, Mizuki began living as one who would embrace death as the true means of becoming stronger. He would eventually volunteer as the operator for the G4 exo-suit and, as fate would have it, clash with G3-X operator Hikawa, to put their ideals to the test on the battlefield. But throughout the course of the battle, the G4 begins to suffer malfunctions.

Despite this, Mizuki refused to surrender. In the end, Mizuki would succumb to the strain placed upon him by the G4 and die. The G4's AI attempted to rise and continue the battle, but was destroyed by Hikawa.

Kamen Rider G4 with the other Riders appears when Natsumi remenber your dream of the Rider War, the dream ends shock of fists between Decade and Kuuga . The World of Kuuga

In the special version of episode 31, Kamen Rider G4 is seen as one of the many Kamen Riders who fought in the Rider War against Decade and were all destroyed. They were presumably restored after the destruction (and subsequent revival) of Decade at the end of the Rider War and the worlds were restored. The Destroyer of Worlds

Kamen Rider G4 appears as a toy, when Sento Kiryu and Sougo Tokiwa they find Ataru Hisanagahe brings them to his room which is filled with Kamen Rider memorabilia, with Sougo and Sento stunned to see toys of themselves. Ataru reveals that Kamen Riders are fictional.Kamen Rider Heisei Generations FOREVER

Kamen Rider G4 appears cited as example of the riders that portrayed the Suit Actor Jiro Okamoto with Caucasus,Ryuga,Odin,Nega Den-O,Leangle and Black later he does not appear in the quiz with the other Riders.

Kamen Rider G4 appears with Kaixa,X and TheBee Masked Form,according by Sieg G4 is consider by Sieg a lover for womens.Type44. - Quietly Listen! Underwear, Myself and Underwear

In the Kamen Rider Agito game for the Playstation, while G3/G3-X has limited fighting time and will instantly K.O after the time is over, G4 doesn't suffer that limitation, possibly because G4 is a more advanced version and has successfully eliminated the weakness of G3/G3-X system.

Kamen Rider G4 with G3 ,G3-X and G3 Mild appears as a playable character with other kamen Riders of Heisei and Showa Era in this video game Kamen Rider Battle Ganbaride.

Kamen Rider G4 appears as a playable character with the other Heisei and Showa kamen Riders in Kamen Rider Riderbout.

Kamen Rider G4 appears as a playable character in Kamen Rider Batton-Line among other Riders in the game.

G4 reappeared in Kamen Rider: Battride War II as a boss fighting against Kamen Rider Agito and Kamen Rider G3-X,G4 is a rider who is good at long-distance attacks, including continuous fire attacks with the modified GM-01 special weapon type. It also uses the Gigant missile launcher. In addition to shooting directly, he also shoots around himself.

G4 along with the movie villains

G4 vs Agito
Add a photo to this gallery 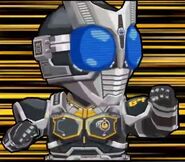 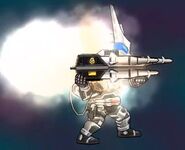 Kamen Rider G4 appears as a playable character with others Kamen Riders in the video game, performer his Gigant against his enemies Kamen Rider Transcend Heroes.

Kamen Rider G4 is a playable character with other Kamen Riders of Heisei-Era , Neo-Heisei-Era and other monster and Villians in Kamen Rider Buttobasoul.

Kamen Rider G4 appears as a playable character in this trading card game with other Kamen Rider Kamen Rider Heisei-Era , Showa-Era,super sentai,Metal Heroes and other Heroes.

After being saved by Hikawa during the raid of Formica Pedes, Shiro's personality had taken a warped fixation on the concept of death. He belives that strength comes from embracing death, where one no longer clings to life as a whole, whether it be the lives of others or their own. This new Consequentialist-esque view in strength had warped his morality, not being afraid to sacrifice the life of Mana and not feeling lost over the deaths of his own men who had previously worn the G4. It is believed that the reason he clings to death as he fights is due to his failure in protecting the facilitators, children, and his comrades during the raid, as he once shown doubt both his views and in his actions after Hikawa's speech about his views on life.

Being a mercenary, Shiro advances the mercenary martial art. This leads Shiro able to be a perfect balanced fighter

Generation 4 is the successor to the G3-System. It was conceptualized by Sumiko Ozawa based G3-X. However, the system was deemed far too dangerous for use, so Ozawa never included the adjustments in the design schematics. However, Risa Fukami would steal the plans and construct the G4 System herself, adding a Prediction System to improve the AI. Unlike G3, the design of which was based on Kuuga, G4 is based on Agito. G4 is much stronger than any iteration of G3. However, its advanced AI causes it to suffer similar issues to G3-X.

Retrieved from "https://kamenrider.fandom.com/wiki/Shiro_Mizuki?oldid=620298"
Community content is available under CC-BY-SA unless otherwise noted.