1 (Movies)
Full list of appearances
This unnamed personal whip Weapon of Shiro that he used in the course of the film to fight against Ryotaro and his friends. He also used for personal weapon after transformed into Kamen Rider Yuuki Hijack Form. Saraba Kamen Rider Den-O: Final Countdown

Shiro with his whip 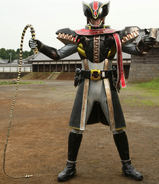 Retrieved from "https://kamenrider.fandom.com/wiki/Shiro%27s_Whip?oldid=664361"
Community content is available under CC-BY-SA unless otherwise noted.