Shintaro Goto (後藤 慎太郎, Gotō Shintarō) is one of the main characters in Kamen Rider OOO. He is the leader of the Kougami Foundation's Ridevendor 1st motorcycle brigade and later becomes the second primary user of Kamen Rider Birth (仮面ライダーバース, Kamen Raidā Bāsu).

Prior to the series, Shintaro Goto was a policeman. However, he quit and joined the Kougami Foundation in order to save the world from the Greeed, progressively climbing his way up until he became leader of the Foundation's Ridevendor 1st Squad motorcycle brigade.

Shintaro first battled the Greeed after they were freed from their seal and he was the sole survivor of the group sent to find them. Shintaro begins to assist OOO as the Foundation's representative in his battle against the Greeed. He also gathers information with assistance from Erika Satonaka.

Later, he becomes interested in Maki's proposal in finding a way for humans to use the O Medals, becoming an official ally to Eiji and Ankh after taking Eiji's words to heart while losing his first chance to become Kamen Rider Birth. He then becomes waiter and custodian at Cous Coussier. After meeting with Akira Date he was granted the original Birth Buster and has been acting as Akira's supporter and partner in battle.

After Akira Date received his payment of one hundred million yen he went overseas to have a surgery to remove the bullet in his head, he temporarily resigned thus Shintaro takes his place as Birth. With the Birth System he fought against the Greeed while also using the Prototype when the complete system was damaged. By the time Date came back, they played major roles in defeating Gamel and fighting against Uva. At the end of the series, Sintaro returns to the police force.

Shintaro got a call from Kousei about the Rider's rampage as he will be Birth again. He then noticed that Kousei is creating Core Medals, but he told Shintaro that these medals will not be desire based. Later, Shintaro arrived where Birth·Proto Type fights Poseidon and joins the fray. However, the twin Births were overpowered by the future Rider. However, they notice that Eiji has stabbed the Rider's back as it is revealed that Ankh is disguising as Eiji as they manage to regain some of the Core Medals. Later, he along with Date and Satonaka provide back for OOO and Ankh, but got themselves defeated again. After the battle, Shintaro was seen cleaning the Cuisine Restaurant Cous Coussier along with Date, Hina, and Chiyoko.

He, along with Akira Date (as Birth and Proto-Birth) were trying to rescue Eiji but ended up defeated by Captain Marvelous

(as Gokai Red) and Rider Hunter Silva. But later they are seen aiding the rest of the Super Heroes against Dai-Shocker and Dai-Zangyack , the results of the fight remains unknown. 「Kamen Rider × Super Sentai: Super Hero Taisen」

Diend and Woz continue their battle, with Woz changing into Futuring Shinobi to outmaneuver Diend's gunfire and put him in hold so Geiz can take back his watches. Geiz refuses to help out of stubbornness and Diend breaks free, summoning Kamen Rider Accel and Birth. Diend uses his Tesla Bands to speed up and strike Woz, followed by Accel changing into Bike form and ramming Woz into the air while Birth barrages him with Cell Burst shots. 「Blade Joker!? 2019」

Kamen Rider Birth appears as a Second Rider in the video game Kamen Rider Battride War, however the user is Date instead.

While Shintaro assists Kamen Rider OOO, he established a one-sided rivalry with Eiji Hino. Shintaro is incredibly loyal to the Foundation but is wary about Kosei Kougami's choice of relying on Eiji and Ankh, believing that they should not be relied on and only helps them for the world's sake. He has shown an aversion to Ankh for his attitude towards the Foundation and his actions as a Greeed. However, though interested on Maki's proposal for an alternate way for normal humans to use the O Medals' power, he disagreed with the scientist's terms. Shintaro becomes Eiji's ally after taking his words of taking action to heart. To work on his pride he took on a job for Cous Coussier and after some humility became much more supportive.

During Movie War Core, Shintaro became Birth after Nobunaga became the complete Armored Warrior Inhumanoid. He later receives the Birth Driver and becomes the second user of Kamen Rider Birth after his former superior, Akira Date relinquishes the position after his contract is over and he became unable to fight.

Like Kamen Rider OOO, Kamen Rider Birth's powers stem from the O Medals that power the Greeed and their Yummy creations. However, Kamen Rider Birth's powers originate solely from the Kougami Foundation's technology developed by Kiyoto Maki to utilize the power of the Cell Medals. On Birth's armor there are capsules called Receptacle Orbs (リセプタクルオーブ, Riseputakuru Ōbu), in which the Birth CLAWs system is stored until a Cell Medal is used to summon the weapons. It was first thought that, due to using Cell Medals as opposed to Core Medals, Birth was, at first, at a disadvantage against the Greeed.

However, as Kamen Rider Birth, Shintaro shows an extreme proficiency in utilizing the system, single-handedly combating three Greeeds on even grounds by strategically using the Cutter Wings, Caterpillar Legs, and Shovel Arm until he uses all CLAWs weapons in Birthday Mode to defeat them, surpassing his predecessor, Akira Date, who wasn't capable of fighting against a single Greeed. Kamen Rider Birth's exosuit originally had a self-destruct function built into it. However, the self-destruct function was disabled by Shintaro Goto when Kiyoto Maki defected to the Greeed side.

Kamen Rider Birth·Day (仮面ライダーバース・デイ, Kamen Raidā Bāsu Dei) is the name for when all six Birth CLAWs units are summoned and attached to Kamen Rider Birth simultaneously. Costing six Cell Medals, it is extremely risky when Kamen Rider Birth activates this combination on his own, as it usually requires Kamen Rider OOO to back him up. This form can also perform a powerful attack called Cell Bash (セルバッシュ, Seru Basshu), where the Breast Cannon fires a powerful energy blast without the expenditure of any Cell Medals
Birth·Proto Type

Kamen Rider Birth·Proto Type (仮面ライダーバース・プロトタイプ, Kamen Raidā Bāsu Purototaipu), or Kamen Rider Proto Birth (仮面ライダープロトバース, Kamen Raidā Puroto Bāsu), is the first design of the Kamen Rider Birth System using an early version of the Birth Driver. Its full combat capabilities are not known because it was designed to only operate at 70% power for testing and nearly all of its features are still set up for data collection. The Birth·Proto Type's design differs from the standard Kamen Rider Birth armor by having a series of markings known as Optical Markers (オプティカルマーカー, Oputikaru Mākā), which include various sensors used in the early test stages, and are a bright red to show up more easily on camera. It cannot access all of the Birth CLAWs units, and is only compatible with the Crane Arm and Breast Cannon.

Shintaro Goto temporarily uses the Proto Type system after the production version is heavily damaged in the final fight with Kazari. Later, Akira Date returns to Japan to became the user of the Prototype Version to end the Greeed conflict. The Prototype Birth was badly damaged by Poseidon in Movie War Mega Max.

This form is exclusive to OOO Episode 45
Crane Arm
The green Crane Arm (クレーンアーム, Kurēn Āmu) unit, referred to as the "Springer Haken" (シュプリンガーハーケン, Shupuringā Hāken, "Jumper Hook" in German), is a powerful winch attachment that is contained in the Receptacle Orb on Kamen Rider Birth's right shoulder. The winch allows him to scale buildings as well as collecting any leftover Cell Medals with one sweep. As a weapon, it can be used as a whip to damage opponents from far.

This Rider Ring which bears the likeness of Kamen Rider Birth appears in Movie War Ultimatum, where it is used to summon Birth to the Underworld alongside the Rings of Kamen Riders Double, Accel, and OOO.

A premium version of this Wizard Ring was later released as part of Kamen Rider Wizard's Wizard Ring toyline. 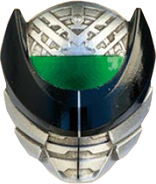 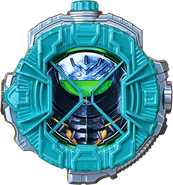 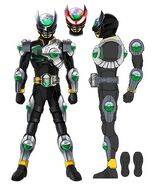