View source
watch 02:24
Wiki Targeted (Entertainment)
Do you like this video?
Play Sound

Where is Chaser Going?

This weapon is summoned from the front portion of the Ride Chaser, but like Mach's Zenrin Shooter, it is also capable of appearing from Chaser's transformation effect.

During Kamen Rider Drive: Surprise Future, an untransformed Shinnosuke uses it to kill Mr. Belt to stop him from eventually becoming evil. He also uses it while assuming Drive Type Special in order to combat against the Paradox Roidmude.

By turning the Advanced Ignition on his Banno Driver, Kamen Rider Gold Drive can briefly steal this weapon from Chaser.

Following the death of Chase and Go inheriting his arsenal as Kamen Rider Chaser Mach, he used the Shingou-Ax to smash the Banno Driver (thus killing his own father) by using its Across Breaker finisher. Why Must They Fight?

The Shingou Ax is composed of the following parts: 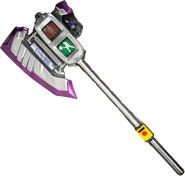 The Shingou-Ax's Full Throttle finisher Across Breaker (アクロスブレーカー, Akurosu Burēkā) is activated when Chaser loads the Signal Chaser Bike into its Signal Landing Panel (シグナルランディングパネル, Shigunaru Randingu Paneru) on the pole and presses the red Shingou Push Button (シンゴウプッシュボタン, Shingō Pusshu Botan, lit. "Signal Push Button") on the shaft. However, as a drawback to this, he must wait until the light on the E-Condition Lamp (Ｅ-コンディションランプ, Ī-Kondishon Lanpu) changes from red to green in order for his weapon's attack to be fully charged before pulling the Full Throttle Trigger (フルスロットルトリガー, Furu Surottoru Torigā), all while the weapon says "Matteroyo!" (マッテローヨ, Matterō yo, lit. "Wait!" (待ってろよ!, "Wait!")). During the wait, Chaser can use either of his other weapons, namely the Break Gunner Where is Chaser Going? or the Ride Booster Blue What's Go Shijima's Reason to Fight?, to keep the target busy. He can also use other Shift Cars (namely Shift Speed Prototype) for extra power while waiting for the E-Condition Lamp to change from red to green, but not before giving it to another Rider to hold it. When Will the Whirlwind Kidnapper Attack? Once the charging is done, as the weapon says "Itteiiyo" (イッテイーヨ！, Itte ī yo, lit. "Good to go!" (行っていいよ!, "Good to go!")), he can initiate one of two variations of this attack.

The Shingou-Ax is also among the various Rider Weapons used by Ganbarider in Kamen Rider Battle: Ganbarizing.

Chaser Mach
(alongside the Zenrin Shooter)

The Ride Chaser summoning the Shingou-Ax from its front section

The words "Omachi kudasai" above the Shingou Push Button