The Destroyer of Worlds (Special Version only)

At a resturant, Shin Magaki confronts a loud group of patrons and is fired. Later, while out walking, he bumps into a fleeing Natsumi, and both start running from the Undead. The mysterious figure continues following the group. Natsumi and Shin continue running from the Undead. Natsumi finds a steel pipe and tries to get Shin to cover her escape claiming that men are supposed to protect women. This fails and the Undead continues chasing them until an explosion destroys it. The mysterious figure approaches them, no longer hiding and throws them both Change Kerberos Rouse Cards. He then returns back to human form.

Junichi offers them both to be Kamen Riders. He also explains that the incident with the Undead ended once, but the power of the Kamen Riders is needed again. Natsumi and Shin refuse and give back the cards. Junichi says to himself that they will return, and that it is their fate is to become Riders. Behind Junichi is Kazuma Kenzaki, who becomes a garbageman. Natsumi and Shin walk away, with images of their Rider forms being shown.

In the movie, he is the replacement of Kamen Rider Leangle,he is armed with the Lance Rouzer, a large spear. He is based on Kamen Rider Leangle, down to his Rouser. His primary finisher is Impact Stab, where his Rouser's tip is powered up and is used to slash and stab opposing Undead with pure force. The attack is activated when the Rouse card, Mighty Impact is roused.

Four years later,of the last battle between Blade and Joker, Magaki and Miwa are seen in the room of a fortune teller wanting you to read their future of each one, Magaki wanted to know what her future was like with Miwa but she was about to leave, which made magaki change her mind to tell the fortune teller to read the future individually to each one, surprised by how she guesses changing the length of the table, he asks her how compatible she was with Miwa, but she counters by listening no more to what the divine told her how compatible Miwa was with Junichi.

when the fortune teller's room was starting to burn a little, Magaki and Miwa leave this run and view See how Junichi helps children in the collection of money for the neediest until the alarms of the undead attacking the city are activated, Magaki, Miwa and Junichi turned into Glaive, Larc and Lance against Squid Undead, the three uses is Mighty finishers, Lance uses impact Stab, for end seal the Undead they leave of the scene.

The Ace Riders appear and turned in his Riders Form, against undeads,even though they were outnumbered,the Ace Riders divide to fight against three undeads each one, Shin is seen battle Mole Undead, Zebra Undead and Shell Undead,later he made a surprise attack Locust Undead and finish seal this in a Rouse card,but a accidentally dropped a letter 3 of Spades,Beat Lion,after seal Undeads Kenzaki and Kotaro Shirai ask them why they are Kamen Riders, they treated her badly for meddling in her affairs.

Shin among Miwa and Junichi confronts Kenzaki in Jacaranda Cafe, for they ended up recovering the Rouse card, also explained that Kenzaki and the other Riders they are a thing of the past ,they leave the restaurant, but kenzaki was following them,until that until they reach the new Board base,Sakuya Tachibana reveals as a boss a new Generation of Kamen Riders and tells the events the originate Albino Joker,he and the other Ace Riders had a little confrontation against Kenzaki, until the list that Amane Kurihara is arrested by police.

more undead appears confronts Amane and Kenzaki appears surprisingly, Magaki , Miwa and Junichi appears in his rescue, star fight between Riders and Undeads the Ace Riders fight to Albiroachi easily defeated and also the Ace Riders brutally attack Deer Undead,Trilobite Undead and Capricorn Undead using Mighty Finisher for each Undead ending up sealing them,when are ataked by more Albiroachi,later in Board the Riders telling the objective of the new Joker,Magaki and the other Ace Riders they consider Kenzaki and Mutsuki Kamijo as charge.

After that, Leangle will seal Beetle Undead for the Kenzaki, Shin as Lance and Miwa as Larc battle against Leangle because they interfere in your affairs, Kenzaki turned into Blade made a brief battle until Junichi appears and stop the fight, he witnesses the fight Glaive vs Blade, when suddenly Giraffa Undead surprise attack all Riders.

Magaki and Miwa they were very jealous to see that both the blade and Leangle , are stronger than they were, Attempting to gain more power, in the night Shin had the encounter with Tarantula Undead that he easily defeat using Impact Stab way of deadly and seal in Rouse card this Undead.

However ,he is attacked by the Albino Joker, who disguised as "Natsumi Miwa", and is mortally wounded, his last act before dying was giving Miwa the Category King Club card before a Jack card left in Magaki's hand. Later of his death,Shiori Hirose has obtained the two cards, a Jack and Four, which gave her clues to identifying Junichi Shimura/Kamen Rider Glaive as the assailant, noting the cards Jack and Four's first letter represent Junichi Shimura (Shi = Four in Japanese).

Kamen Rider Lance appears with other kamen Riders commanded by Wataru Kurenai ,but all are murdered by Decade in the episode 1 of Kamen Rider Decade in the dream of Natsumi Hikari and then conclude the dream with Decade as only Rider in the Rider War Rider War

In the special version of episode 31, Kamen Rider Lance is seen as one of the many Kamen Riders who fought in the Rider War against Decade and were all destroyed. They were presumably restored after the destruction (and subsequent revival) of Decade at the end of the Rider War and the worlds were restored. The Destroyer of Worlds

Kamen Rider Lance is a playable character with the other Heisei and Showa kamen Riders in Kamen Rider Battle Ganbaride.

Kamen Rider Lance appears as a playable character in this trading card game with other Kamen Riders of both the Heisei-Era and Showa-Era, Super Sentai, Metal Heroes and other Heroes.

Kamen Rider Lance appears as a playable character with the other Heisei and Showa kamen Riders in Kamen Rider Riderbout.

Kamen Rider Lance appears as a playable character with other Riders and monsters in Kamen Rider Break Joker. 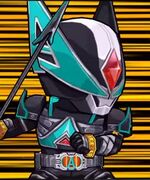 Retrieved from "https://kamenrider.fandom.com/wiki/Shin_Magaki?oldid=703895"
Community content is available under CC-BY-SA unless otherwise noted.