Shin Kazamatsuri is a professional motorcyclist who gave up his chances for fame to help his father Daimon Kazamatsuri make a positive change in the world by volunteering as a test subject for his experiment to cure diseases, oblivious to the mad ambitions of his father's partner, and the true goal of the sinister organization funding them.

Haunted by horrifying nightmares that seem all too real and struggling to maintain some semblance of normality in his life, he struggles to uncover the conspiracy weaving around him as his life crumbles apart. With fear and apprehension dampening his resolve, he turns to the few friends and family he has left for solace, not completely understanding the danger they face by becoming involved.

Although he overcame treacherous enemies and learned how to control his mutant form, he eventually comes to walk the bitter path all true Riders follow, a path that embraces isolation and forfeits one's own happiness. In distancing himself from his former humanity, he loses his friends, family, and the few remaining allies that helped him escape from the grasp of the Syndicate. In the end, it is his resolve and strong sense of justice that keeps him going.

With the death of his girlfriend, Ai Asuka, Shin finally clears himself of his doubts and takes upon the resolve to destroy the Syndicate with his power. After a confrontation with the scientist who shot Ai, Shin comes to her side in her last moments and with her dying breath, she begs Shin to take care of their child, who may still be alive due to inheriting Shin's mutant abilities.

In his final showdown with Goushima, Shin triumphs and finishes him off with a savage decapitation finisher. When the cyborg attempts to perform one last surprise attack through a hidden bomb in his head, Shin throws the head aside and narrowly avoids the fatal blast.

Upon attempting to escape, Shin enters a short confrontation with the CIA and the Syndicate, where he narrowly avoids capture through the interference of the Agent that was pursuing him.

In the final scene of the movie, Shin carries his deceased girlfriend through a dark tunnel. As he looks up, his child telepathically communicates with him, alerting Shin to the possibility that his child indeed inherited his mutation, and thus, is still alive within Ai. With this knowledge in mind, Shin smiles and continues to carry Ai's body with new found hope in his heart, as a psychic apparition of his son guides him with a light.

Shin, along with every other Showa Rider, appears in Kamen Rider Decade: All Riders vs. Dai-Shocker. In the Internet spin-off films accompanying the movie, Shin is identified as the 13th official Kamen Rider of the Showa era. During the battle, he is seen fighting Bakeneko, Formica Pedes, Rat Fangire, Siomaneking, Mole Imagin and Geophilid Worm.

The Double Riders joined with New Den-O and OOO to fight Shocker's forces, but were eventually defeated. When the order was given to kill everyone, V3 suddenly appeared, asserting that there were more than four Riders. V3 was soon followed by all the other revived riders that came after him, including Shin, as even though Rider history was changed, the people's memories haven't changed.

After the riders were united, they faced off against Shocker's Great Leader. Later, when joined by a force of extra Riders, Shin and all the other riders got on their motorcycles and performed the "All Rider Break", ramming into the Rock Great Leader and defeating it once and for all. 「OOO, Den-O, All Riders: Let's Go Kamen Riders」

Shin was among the Kamen Riders caught up in the 'Super Hero Taisen' incident. He was presumably sent to the dimensional rift, under the pretense of being defeated, by Captain Marvelous

while he was apparently hunting the Riders. When his and Tsukasa's ruse was revealed, Shin and the other Riders appeared through the dimensional wall. Shin then fought alongside all the other Kamen Riders and Super Sentai

against Dai-Shocker and Dai-Zangyack's Shocker-Zangyack Alliance. During the final battle, he is seen fighting Hades God Dagon with OhBlue and MammothRanger, and Armadillo Orphnoch and Gormin Sailors with the Boukengers. As Walz Gill and Ackdos Gill start blasting at everybody, Shin is in the background getting tossed into the air with the Gekirangers. 「Kamen Rider × Super Sentai: Super Hero Taisen」

As one of the 15 Showa Riders, Shin fought in the battle against the 15 Heisei Riders in Zawame City. At some point during the fighting he was defeated by a Heisei Rider, turning into a Lockseed.

Shin was later released with all the other sealed Riders by Kamen Riders Gaim and ZX. United, all 30 Kamen Riders teamed-up to take down the revived Badan Empire.

After Badan was defeated, Shin fought with the Showa Riders in a final showdown against the Heisei Riders. Shin took on Den-O, enduring his Extreme Slash Full Charge. The battle was ended when Rider 1 and Gaim reconciled on the differences of the two sides of Kamen Riders. 「Heisei Rider vs. Showa Rider: Kamen Rider Taisen feat. Super Sentai」

Due to the timeline alteration caused by Shocker, Shin became one of the brainwashed Riders in that timeline, donning the name of Shocker Rider Shin.

Following the Rider Grand Prix in which Drive emerged victorious over Rider 3, who was promptly integrated into the Great Leader of Shocker's Rider Robo form, Shin was among the Riders who attacked the trio of Black RX, Faiz and Mach. Ultimately, the Double Riders 1 and 2 made their appearance having survived their apparent demise from within the Rider Robo, and broke Shocker's brainwashing on the fallen Riders, enabling all Riders to unite in a final battle against Shocker.

Unfortunately, Shin was among the Riders whose existence was erased by the Rider Robo. This fate, however, was rendered moot when the Rider Robo was finally destroyed by Shurikenjin Tridoron

Shin has a cameo in the anime special, Kamen Rider SD. He is not presented as an active Kamen Rider like the others however, instead being presented along with many minor Kaijin from different Rider series.

net movie, Super Sentai Murder Mystery! You’re the Great Detective! as one of the suspects for the murders of Shinken Pink

, as the evidence collected suggests a "Hopper"-themed rider is behind it.

When it is revealed that net movie director Hiroyuki Kato was the murder culprit, Shin holds up Shinken Red's

as one of several Riders and Rangers holding Super Sentai and Kamen Rider merchandise respectively, when the Go-Busters

explained to Kato that all the Riders love Super Sentai and vice versa.

Shin is a melee range fighter without any martial art skill. Despite this, his animalistic instinct and strength alone enables Shin to defeat his opponents with ferocious attacks. Due to this fighting style, Shin lacks any true finishing technique.

Categorized as a Cyborg Soldier Level 3 (改造兵士レベル3, Kaizou Heishi Reberu Surī) by the Syndicate, and colloquially dubbed the Masked Rider by both the Foundation and the CIA, Shin transforms into a heavily mutated, insect-like humanoid with enhanced strength and regenerative abilities. Through the intense gene therapy process he endured, the Grasshopper genes bonded to his cells give him a number of abilities which are only further enhanced through his body's mutation, such as an incredible jumping range, heightened senses, bolstered stamina, and phenomenal lower body strength allowing him to run at great strides and deliver kicks of intense force. In addition, he has limited telepathic communication with other mutants, including Onizuka and his own unborn son.

As his primary forms of offense, Kamen Rider Shin brandishes the High Vibration Nails (ハイバイブネイル, Hai Baibu Neiru) on his fingers, and the Spine Cutters (スパインカッター, Supain kattā) on his forearms, both of which he uses to violently disfigure and decapitate enemies. Both are highly acute and razor sharp, and when they're dull or break, Shin can quickly replace them through his advanced regeneration.

Intriguingly, despite his berserk fighting style and constant fear of the monster he might become, Shin is in full control of his mutant form, and actively attempted to avoid conflict throughout the events of the film, only fighting when directly provoked. Shin is mostly docile when idle or unprovoked, and is even able to identify others such as his father and Ai while mutated, even to the point of sharing a moment of comfort with Ai.

Despite his preference for using his arms as weapons, Shin is capable of performing the Shin Rider Kick (真ライダーキック, Shin Raidā Kikku)[5], as seen when he participated in the All Rider Kick. 「Kamen Rider Decade: All Riders vs. Dai-Shocker」

In Kamen Rider Fourze the Net Edition: Everyone, Class is Here!, Shin's strength is played for laughs, with his High Vibration Nails and Spine Cutters causing severe pain to Fourze with just a simple handshake.

KamenRide: Shin (カメンライドシン, Kamenraido Shin) is the Kamen Ride Card which contains the power of Kamen Rider Shin. In All Riders vs. Dai-Shocker, Decade Complete Form Jumbo Formation performed the Final Dimension Kick, a variation of the Dimension Kick, transforming the Shōwa Riders, including Shin, and Heisei Riders into Kamen Ride cards for Decade to travel through as opposed to Final Attack Ride cards before hitting the target. 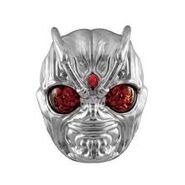 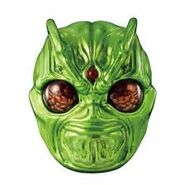 Kamen Rider Shin Lockseed (仮面ライダーシンロックシード, Kamen Raidā Shin Rokkushīdo): A Lockseed bearing the likeness of Kamen Rider Shin, created when Shin was defeated in the battle between the Showa Riders and Heisei Riders. 「Heisei Rider vs. Showa Rider: Kamen Rider Taisen feat. Super Sentai」 The core image depicts Shin's headshot while the lid backside image depicts his signature pose. When inserted into a Sengoku Driver or when channeled through the Showa Rider Lockseed, it would allow an Armored Rider to assume Shin Arms (シンアームズ, Shin Āmuzu). It is styled for Gaim, Kurokage, Bujin Gaim, and Kamuro in the toyline. 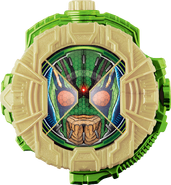 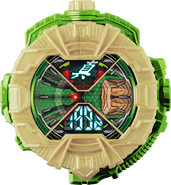 The eponymous hero of the 1992 film Shin Kamen Rider: Prologue, Shin was the first of three Kamen Rider Series protagonists whom were introduced in the 1990s, officially labeled as Showa Riders despite debuting during the Heisei era due to the involvement of series creator Shotaro Ishinomori.

Before the name "Kamen Rider Shin" was decided, Shotaro Ishinomori originally planned for the character to be called "Kamen Rider Gaia" (仮面ライダーガイア, Kamen Raidā Gaia). The design of this Rider initially depicted a much more traditional looking Kamen Rider, before later designs switched to a "Kamen Rider Style Reform" version (resembling a man in a motorcycle helmet and modified riding jacket), eventually settling on the mutated grasshopper humanoid that would become Kamen Rider Shin.

This concept would later resurface in the manga Kamen Rider Eve -Masked Rider Gaia- via its protagonist Jun Kadowaki, and for a Kamen Rider character in Kazuhiko Shimamoto's Skull Man manga.