Based on a dump truck, Shift Rumble Dump (シフトランブルダンプ, Shifuto Ranburu Danpu) is a sentient Type Wild Shift Car which allows Drive to gain the Rumble Dump Shift Tire, equipping him with the Rumble Smasher. The same effect applies to Kamen Rider Mach if he uses it in his Mach Driver Honoh to activate the Kourin Signal Arabull. This Shift Car was initially used in Type Speed; however, it did not not synch well with said form, thus triggering the development for Type Wild in order for Drive to gain better control of the Rumble Dump Tire.

Rumble Dump was first used by Shinnosuke Tomari as Kamen Rider Drive when he confronted Crush and his fellow Roidmudes 060 and 074. Despite successfully warding them off, it became obvious that Drive had little control over the Rumble Dump Tire in the body of Type Speed; Rumble Dump would be most compatible with the new Type Wild. What Are the Steel Robbers After?

Gaining the passion to assume Type Wild Dump, this new form proved extremely effective as Drive performed the Drirumble Full Throttle finisher to defeat Mashin Chaser. Soon after, Drive piloted Tridoron against Roidmude 074, who had become a Giant Roidmude Cobra Type; Drive eliminated the Roidmude with Rumble Dump. Who Does the Warrior Fight For?

As with the majority of the "upgraded" Shift Cars, Dash Rumble Dump exists only as a sound programmed into the DX Drive Driver.

Arabull Kick Macher
Add a photo to this gallery 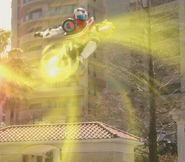 Arabull Heat Kick Macher
Add a photo to this gallery

Retrieved from "https://kamenrider.fandom.com/wiki/Shift_Rumble_Dump?oldid=556866"
Community content is available under CC-BY-SA unless otherwise noted.