Seen!! The Great Leader's True Identity!! (見た！！大首領の正体！！, Mita!! Dai Shuryō no Shōtai!!) is the twenty-sixth episode of Kamen Rider Stronger. It featured the end of Black Satan as Stronger faced off against the Great Leader, whose true form was revealed. It also featured the first appearance of a new organization led by General Shadow. 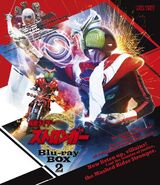 Retrieved from "https://kamenrider.fandom.com/wiki/Seen!!_The_Great_Leader%27s_True_Identity!!?oldid=645011"
Community content is available under CC-BY-SA unless otherwise noted.