Sabotage, Having No Greed, and Taking a Break

Sabotage, Having No Greed, and Taking a Break (サボりと無欲と休憩中, Sabori to Muyoku to Kyūkeichū) is the eighth episode of Kamen Rider OOO.

Eiji gets to the root of the Komoris' problem involving greed and loss of ambition while Ankh fights for survival after a failed confrontation with Uva.

After Gamel and the Bison Yummy fall back, Eiji attempts to keep Takeshi and Momoko from fighting each other as the latter snatches the winning scratchcard and throws it into the river to the former's shock. As he searches for the scratchcard, Momoko reveals to Eiji that Takeshi was once a photographer before becoming his current money-driven self after being used to the sweet life. Eiji remains at Takeshi's side and helps him regain his love for photography. Elsewhere, a weakened Ankh finds himself unable to heal after intentionally discarding the Kuwagata and Cheetah Medals to escape Uva and is forced to wait on Shingo's body, refusing to call Eiji out of pride. Later, Mezool stops a fight between Uva and Kazari at their base, convincing the two to trade for the other's Core Medal. Later that night, as Eiji arrives to meet Kougami for a favor, Gamel whines about Kamen Rider OOO blinding him as the Bison Yummy takes his master's injuries personally with a plan to punish Kamen Rider OOO. The next day, as Takeshi and Momoko reconcile, the Bison Yummy attacks a construction site to get Kamen Rider OOO's attention. Sensing the Yummy, Ankh attempts to crawl to the monster's location when Eiji appears with Cell Medals he has been loaned from Kougami and uses them to heal Ankh, who is relucant to accept them at first. The two later arrive at the construction site, with Kamen Rider OOO fighting the Bison Yummy before assuming Takakiriba. Much to Ankh's shock, Kamen Rider OOO uses the Lion Medal to become Lakiriba to blind the Bison Yummy while destroying him, with only a single Cell Medal remaining. After seeing Momoko and Takeshi having made up, with the latter resuming his photography career, Eiji takes his leave as Chiyoko attempts to ask him again to work for her. However, Hina follows Eiji to Ankh's location, confirming that he is the reason Eiji is not accepting Chiyoko's offer. She forcefully grabs the Greeed as she convinces Eiji to reconsider the full-time job and housing at the Cous Coussier so she can keep an eye on her brother's body. 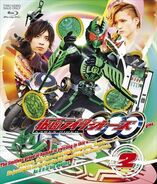 Retrieved from "https://kamenrider.fandom.com/wiki/Sabotage,_Having_No_Greed,_and_Taking_a_Break?oldid=491153"
Community content is available under CC-BY-SA unless otherwise noted.