The Axelaygun is composed of the following parts: 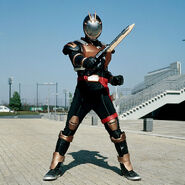