"Ryoma at your service!"
―Ryoma's announcement when summon from the Eyecon Driver G[src]

Ryoma Damashii (リョウマ魂, Ryōma Damashī, lit. "Ryoma Soul") is an alternate blue samurai-based form of the ghost Riders themed after Sakamoto Ryōma, a low-class-borne samurai who was an influential part of the events that brought about the end of the Tokugawa Shogunate thanks to the successful Satchō Alliance, an alliance between two formally irreconcilable nations, with Ryoma serving as the third party, and is considered "the father of the Imperial Japanese Navy", due to his efforts to create a navy to content with the Shogunate's own. Eventually, Ryoma's efforts had led to the Meiji Restoration which changed Japan's government to that of a peaceful constitutional monarchy instead of one ruled by an Imperial shogunate family through war and conquest, though Ryoma's assassination prior to it's implementation prevented him from seeing his life's work from being carried out.

Accessed through the Ryoma Ghost Eyecon, this form bears the Persona Dreamer (ペルソナドリーマー, Perusona Dorīmā) helmet with the Face Dragon Head (フェイスドラゴンヘッド, Feisu Doragon Heddo) faceplate. While it is mostly used by Kamen Rider Ghost, it can also be used by other Riders.

As one of the 15 heroic souls, Ryoma Damashii's power is also channeled through the Grateful Damashii which is accessed by Ghost via the Eyecon Driver G, appearing on Grateful's Armor Sublime as the Ryoma Greave (リョウマグリーブ, Ryōma Gurību). [1] Manifesting as a body, the Ryoma Ghost fights with his weapon of choice being either the Gan Gun Saber Blade Mode or the Sunglasseslasher Sword and Blaster Modes.

In 2005, long after his death, Sakamoto Ryoma was reincarnated as a Parka Ghost by the Ghost Hunters with help from Sennin. Among the 15 luminary ghosts assembled by the lead Ghost Hunter, Ryu Tenkuji, who personally picked them with his reasoning being that these figures were people whose lives burned the brightest, their purpose was to counter the Gammaizers, the 15 deities of the Gamma World, in preparation for the Gamma invasion of the human world. Vacant Ghost Eyecons were prepared for each of the luminary ghosts, however, with the unforseen betrayal of Chikara Saionji leading to Ryu's death and the dissolution of the Ghost Hunters, all 15 ghosts were left sealed in unique objects which pertained to them each and would not be freed until the Gamma invasion finally arrived ten years later. Reminiscence! Secret of the Mind!

The Ryoma Parka Ghost was unsealed at an unknown point in time by Chikara Saionji. After the 15 heroic Eyecons were gathered and granted Takeru's wish, the Ryoma Eyecon flew off to parts unknown. Magnificent! The Mysterious Eye!

During this time, Ryoma possessed a man named Nagamasa Tamura and offered Ghost a challenge to form the modern-day "Satchō Alliance", which in reality was to reconcile the relationship between Nagamasa and his father, Sachinoshin Tamura. Once that was done, Ryoma offered Ghost Toucon Boost Damashii his power, changing him into Ryoma Damashii. Exciting! A Free Man! Superb View! The Earth's Dawn!

Moving to defend Specter against Kamen Rider Necrom's Omega Ulord, Ghost assumed Ryoma Damashii, performing the Mega Omega Flash in response with the resulting clash ending the battle as Ghost and Specter were forced out of their transformations while Necrom was drained of power. Perfect! The White Kamen Rider!

"He's a little rough on the edge, but he's a good kid."
―Ryoma before he joined the Eyecons in creating Eyecon Driver G.[src]

Driven by his trauma in the Gamma World, Takeru's desperate attempt to use the Eyecons to make a wish again made all of his Eyecons in his possessions to leave him. Eventually, with Specter lending Takeru his Eyecons and Alain had his left him due to no longer being subjected, all Eyecons agreed to cooperate and contributed to the creation of Eyecon Driver G, allowing Takeru to transform into Ghost Grateful Damashii. Intimate! The Giant Eyecon!

Alongside Himiko, Ryoma is summoned by Ghost Grateful Damashii via the Eyecon Driver G when he goes to the Gamma World again, backing him up against a pair of Gamma Superiors leading a pack of Gamma Commandos. They quickly finish the battle with their combined Omega Formation attack which destroys the Gamma force. Do-or-Die! Ready for Infiltration!

Ryoma was defeated alongside Himiko by Adel Planet during the disastrous engagement against Adel and his 11 remaining Gammaizers by the 15 Heroic Ghosts and Ghost Grateful Damashii, having chosen not to rely on Mugen Damashii's power alone while facing the Gammaizers. Viewing themselves as now obsolete, the heroic ghosts would enter a brief period of unresponsiveness before soon enough returning to Takeru's side, as he asserted his faith in them, against Gyro. Resurrection! Hero's Soul!

Attacked by Dark Necrom Red and Dark Ghost, Ghost was robbed of his Eyecons which were taken as part of Argos' machination. When Takeru and his friends followed them to the Island of Eyecons, Ryoma was found to be living in harmony as one of 100 reincarnated historical figure within the Village of Heroes. When Argos' Gamma forces attacked the village, Ryoma was struck down and reduced back to an Eyecon which was recovered along with the others by Argos. Gathering all 100 heroic Eyecons, Argos used them as a sacrifice along with Darwin's power of evolution to convert Takeru's dead body into a vessel for the ultimate Eyecon, the Extremer Driver, which he intended to use to fulfill his ultimate agenda of converting all life on both Earth and the Gamma World into ghosts. Ultimately, however, Takeru was able to gain the strength of the 100 heroes along with his friend's spirits, allowing him to defeat Argos seemingly at the cost of his own existence only for the 100 heroes to use their power to restore his soul with the original fifteen heroes returning to his side as he came back to Earth. Kamen Rider Ghost the Movie: The 100 Eyecons and Ghost's Fateful Moment

When Ghost faced the Hatena Bugster, Ryoma was brought forth among all fifteen heroic spirits with the Eyecon Driver G only for the Bugster to repel even the God Omega Drive; Takeru would ultimately resort to a new power. Kamen Rider Heisei Generations: Dr. Pac-Man vs. Ex-Aid & Ghost with Legend Rider

Sakamoto Ryoma was among the historical figures featured in the Genm Corp. game WayoseTUNE. We're Me!?

Ryoma is among the historical figures who are featured in Stories of the World's Greatest People, the book passed down to Takeru Tenkuji by Ryu Tenkuji. He is acknowledged under Lucky Adventurer of the Bakumatsu Period: Sakamoto Ryoma (幕末の風雲児 坂本龍馬, Bakumatsu no Fūunji: Sakamoto Ryōma). Exciting! A Free Man! 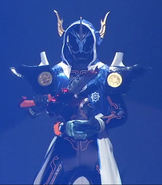 Necrom Ryoma Damashii
Add a photo to this gallery

Ryoma Damashii was released as part of the Ghost Change set GC-08 alongside Goemon Damashii.

Ryoma Ghost
Add a photo to this gallery

Omega Drive (Ore Ryoma)
Add a photo to this gallery

Omega Formation (Ryoma and Himiko)
Add a photo to this gallery

Retrieved from "https://kamenrider.fandom.com/wiki/Ryoma_Damashii?oldid=582799"
Community content is available under CC-BY-SA unless otherwise noted.