For the A. R. world version, see Shoichi Ashikawa.

Ryo Ashihara (葦原 涼, Ashihara Ryō) is a 20-year-old man who is afflicted with a mysterious metamorphosis and becomes Kamen Rider Gills (仮面ライダーギルス, Kamen Raidā Girusu, Masked Rider Gills). As he seeks to uncover the truth behind his power, he becomes entangled in the fight against the Unknown, eventually crossing paths with Agito.

Ryo was formerly a star swimmer from Jyohoku University, but his future as a swimmer came to an end after a near-fatal car accident. After the car accident, Ryo began to mysteriously undergo a metamorphosis. However, this came at cost of all those closest to him, leaving a signature of resignation to his swimming coach, who began to avoid him out of fear when he demanded to know the nature of leaving the University. Ryo turned to his former girlfriend Mayumi Kitahira for help after avoiding her for three months. However, soon enough during the Snake Lords' attempt on Mayumi's life, Ryo underwent the partial evolution into an imperfect form of Agito. This forces him to stay away from Mayumi, who was frightened by his appearance to the point of moving out of town. But because he was an imperfect copy of Agito, Ryo's lack of a stabilizer made his transformation unstable, carrying with it detrimental effects on his body such as cellular decay.

The OverLord found Ryo, prolonging his life for a while longer. After attacking the OverLord out of fear, Ryo learns that his father's body had been found, believed to have died of a nervous breakdown. To learn the truth behind his changes and his father's suicide, Ryo sought answers from the other survivors of the Akatsuki, using his father's black book to find them, starting with Saeko Shinohara, protecting her from the Zebra Lords. During his attempts to kill the Lords, he fell in love with a survivor, Aki, who was killed by the Lords, though by the time Kamen Rider Agito arrived, Ryo came to believe that Agito was her murderer. But furthermore, many of the surviving Akatsuki members came to see Gills as the one out to kill them.

Ryo befriended a boy named Kazuki, whose parents were killed by the Sea Urchin Lord and wanted to evade the truth of what had happened. After seeing Ryo fight as Gills, the boy came to terms with the truth and had Ryo drop him at church to pay his final respects. But while attempting to meet another passenger of the Akatsuki named Masumi; Ryo was attacked by the psychic Sagara and left for dead. However, Ryo was founded by Tetsuya Sawaki, who asked the OverLord to resurrect him like in the past.

But when the OverLord refused, in fear of shortening his life more, Tetsuya attempted to have the newly-awakened Mana Kazaya resurrect him instead. Because of Mana, Ryo discovered that his body chemistry was also altered; able to now accommodate his transformation. After fighting the Orca Lord, Ryo was found by Tetsuya, who reveals the Lords' fear and Ryo's genetic relation to Agito. Furthermore, he learned of Shouichi's identity as Agito and the truth behind Aki's death.

Eventually, Ryo was forced to fight Kaoru Kino, outmatched by the man's Agito form and forced to run upon being wounded. But Ryo is mysteriously suffering chest pain that would kill a normal person. Taken to the hospital, Kino attempted to use the operation as an excuse to finish the job. But at the last second, Kino lost control over his arm as Ryo awakened, escaping with Majima following. Majima was unable to save Ryo on his own until Tetsuya arrived, allowing him to transfer his Agito power to Ryo. As a result, Ryo obtains the ability to assume Exceed Form. He used his new power to defeat Kino, diving after him. It was that act that reminded Kino of his intent to save lives, leading to his eventual sacrifice.

After Kino's death and with the Lords nowhere to be found, Ryo befriended Risa Mishihara. However, he took her OverLord-induced death hard and attacked the El of Ground, only to be defeated and left for dead. However, Gills arrived to aid Agito and G3-X to finish their fight with the Lords for good. In the epilogue, Ryo left town and is wandering the world with a young puppy.

Ashihara suddenly reappears out of a cupboard and immediately Makoto and Shouichi try to get him to win the title when talking about Gills' abilities. As a result, Ashihara gets the title but before they can laugh, an alarm goes off, the Unknown have finally arrived. The three Riders waste no time and rush out to stop them.

In the end, Telepi decides that there is no one Ultimate Rider and decides that they should all win. As he says this, the party hat appears over all three pictures of the Riders sitting on Telepi's table.

In this special Dr. Kunieda catches up to Shouichi and tells Shouichi that his son committed suicide a half year ago because he could not handle his slow transformation into Agito. Dr. Kunieda tells Shouichi to not lose hope and that "eventually the sky will be clear". Shouichi senses the Unknown and goes to fight with a new found confidence.

The story ends on a cliffhanger with a mysterious girl going into the G-trailer and stealing data on the G4 project, the events of this would be continued in the movie.

Exceed Gills and Another Agito appeared to Hikawa's aid when he was attacked by an Agito and a dog-type Unknown but they were easily getting defeated. Luckily Agito/Shoichi Tsugami finally shown up. The real identity of this Agito was Shouichi Maguichi, who was crazed after being blamed for cheating on the programs for using a hidden camera during his childhood. Wanting to cure his sick mind he worshipped the Dog Orphnoch/Dog Lord and was told to feed on the despair of the public. After Agito and the others killed the Dog Lord/Orphnoch, Maguichi/Agito transformed into Mirage Agito out of rage. In a fight with Kamen Riders Agito and Gills, despite gaining the upper hand he was defeated by the strategized use of the Shining Caliber and a Shining Rider Kick. Maguichi was then arrested and was given an unspecified treatment. [Kamen Rider Agito: Heaven's Door]

Kamen Rider Gills returns in OOO, Den-O, All Riders: Let's Go Kamen Riders. Gills wasn't shown alongside the secondary Riders when they stood in the cliff around the battlefield, due to his primary suit being damaged by water. However, when the Riders ride their vehicles and fly towards the Great Leader, Gills is seen on his Gills Raider in the middle of the group, alongside the other Riders as Gills charges straight through the Great Leader's giant body.

Kamen Rider Gills appears as a toy, when Sento and Sougo they find Ataru he brings them to his room which is filled with Kamen Rider memorabilia, with Sougo and Sento stunned to see toy versions of themselves. Ataru reveals that Kamen Riders are fictional. [Kamen Rider Heisei Generations FOREVER]

Kamen Rider Gills appears with ZO, Garren, and V3. According to Urataros, Gills is considered a perfect material for marriage.[Type1. - The Bride of the Child of the Sun!]

Type4. - Quietly Listen! The Tragedy of the 20th Anniversary Rider!!

Kamen Rider Exceed Gills appears with Double, Agito Flame Form and Psyga. According to Kivat-Bat the 3rd, Exceed Gills is considered a the least compatible match.[Type11. - Anyway, We Do Like Hell!]

In a stage show where the Gaorangers are seen fighting their usual foes, the Black Cross Führer

, a Lord, and a Gurongi show up and wind up defeating them. The Gorengers

Kamen Rider Gills appears in the video game with the others Kamen Riders in Kamen Rider Super Climax Heroes. Also, he use his Exceed Gills form as a finisher in the game.

Kamen Rider Gills and his Exceed Gills form appears as a playable character with the other Heisei and Showa Kamen Riders in Kamen Rider Riderbout. 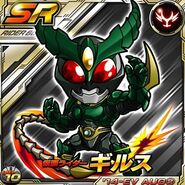 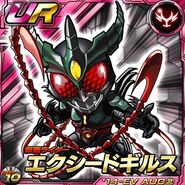 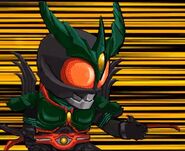 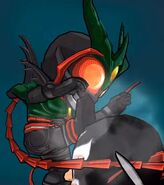 Kamen Rider Gills and Exceed Gills appear as a playable character with other Riders and monsters in Kamen Rider Break Joker.

Kamen Rider Gills and Exceed Gills appears as playable characters with other Kamen Riders in the video game. He performs his Gills Hell Stab and in his Exceed Gills Form, he uses Exceed Heel Claw and Gills Stingers against his enemies in Kamen Rider Transcend Heroes.

Kamen Rider Gills and his Exceed Gills form appears as a playable character with the other Heisei and Showa Kamen Riders in Kamen Rider Buttobasoul. 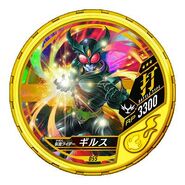 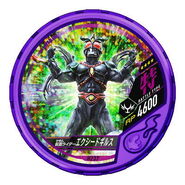 Ryo Ashihara was first introduced to be a cheerful person with a high spirit. When the Agito seed started to activate and prevented his swimming competition, he went through a serious breakdown and afterwards, turned into a brusque, aloof person. Despite this, Ryo still maintained his kindness.

As Gills, Ryo's fighting style is derived from snake kempo and mixed it with his wild and fierce attack.

Despite possessing a Seed of Agito, Ryo transforms into an incomplete and feral version of Agito. Despite being imperfect, Gills is physically stronger than Agito and can match him in a one-on-one battle. Gills is also extremely resilient, having survived several near-death injuries. However, the transformation was unstable, causing Ryo's body began to undergo accelerated cellular decay. The damage to his body was severe enough to kill him, though he was revived by the OverLord. After dying a second time and being resurrected by Mana Kazaya, Ryo discovered that his body chemistry was also altered and is now able to accommodate the transformation.

Gills initially had much shorter horns before they grew to their full size during his battle with Anguis Masculus. Gills was later temporarily forced back into this form when he was defeated by the El of the Ground.

Gills evolved into Exceed Gills upon receiving Koji Majima's Agito power. Like Agito, the Wiseman's Monolith is now present on his chest. In this form, all of Gills' stats are enhanced, putting him on par with Another Agito.

Gills is now able to extend clawed tentacles called the Gills Stingers from behind his shoulders. His Gills Heel Claws have also been upgraded in order to unleash the new Exceed Heel Claw finisher attack. . 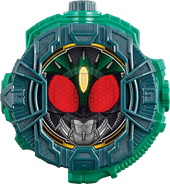