Everyone Gathers for a Clashing Crash!

Robot Gamer (ロボットゲーマ, Robotto Gēma) is Kamen Rider Ex-Aid's support robot. When the Gekitotsu Robots Gashat is used by Ex-Aid, Robot Gamer can fuse with him to access Robot Action Gamer Level 3 arming him with the Gekitotsu Smasher.

Robots Gamer is a small black, white, and red mech-themed support robot with boxing gloves-like arms. It can combine with Ex-Aid to assume Ex-Aid Robot Action Gamer Level 3, equipped with the Gekitotsu Smasher.

The Robot Gamer was summoned for the first time by Kamen Rider Ex-Aid, having recovered the Gekitotsu Robots Gashat from the first Collabos Bugster. Assuming Robot Action Gamer Level 3, Ex-Aid was able to fight on an even footing against Kamen Rider Genm's own Sports Action Gamer Level 3 for the first time. Overpowering Genm with the Robot Gamer's raw physical strength, Ex-Aid struck Genm with a Gekitotsu Critical Strike only for Genm to escape amidst the resulting explosion. 「Everyone Gathers for a Clashing Crash!」

Against Graphite and DoReMiFa Collabos

Given permission to Kuroto Dan to keep Gekitotsu Robots, Ex-Aid assumed Robot Action Gamer Level 3 alongside the Level 2 Riders Brave Quest Gamer and Snipe Shooting Gamer against Graphite and the DoReMiFa Collabos Bugster; a single attack knocked down everyone but Ex-Aid, but Genm Sports Action Gamer Level 3 stepped in and let the Bugsters slip away. Later, defending Seiichi Kuboyama from the Collabos Bugster, Ex-Aid assumed Robot Action Gamer Level 3 while Brave Quest Gamer Level 2 attacked Graphite. Jumping in to save Brave when he was beaten down by Graphite, Ex-Aid blocked an attack from Graphite, causing his transformation to be canceled. 「A Hollow Beating in the Heart!」

Faced with a pair of Collabos Bugsters as well as Genm Sports Action Gamer Level 3, Ex-Aid and Brave assumed their own Level 3 Gamers to engage them with Ex-Aid Robot Action Gamer fighting the Giri Giri Collabos while Brave Beat Quest Gamer fought Genm. However, the skirmish would end quickly as the Collabos was too quick for Ex-Aid to attack with Genm's flywheel distracting the Riders while he and the Bugsters escaped. 「The Reason for Some Lies!」

Recovering Jet Combat from a Collabos Bugster, Kamen Rider Snipe gave Ex-Aid and Brave an ultimatum to surrender their Gashats to him with the life of their patient on the line. Assuming Combat Shooting Gamer Level 3, Snipe attacked the other Riders, moving too fast to be hit and shooting from a distance, prompting them to also assume Level 3. However, despite the upgrades, Snipe remained unhittable. Targeting Brave first, Snipe shot him out of Beat Quest Gamer Level 3, claiming the DoReMiFa Beat Gashat. Turning his attention to Ex-Aid, Snipe siced the Collabos Bugster on him only to strike both with the Jet Critical Strike, destroying the Bugster while forcing Ex-Aid out of Robot Action Gamer Level 3, allowing him to claim the Gekitotsu Robots Gashat. 「Men, Fly High!」

Ex-Aid assumed Robot Action Gamer against Genomes only to be easily overpowered and forced out of his transformation; Emu would be forced to resort to a new power. 「Kamen Rider Heisei Generations: Dr. Pac-Man vs. Ex-Aid & Ghost with Legend Rider」

Finding that the Salty Bugster had returned as Level 3, Ex-Aid assumed his own Level 3 Robot Action Gamer against him, overwhelming the Bugster before Genm Sports Action Gamer Level 3 arrived, at which point Ex-Aid switched to Hunter Action Gamer Full Dragon Level 5. 「Who's the Black Kamen Rider?」

Confronting the Gatton Bugster, Genius Gamer M, recognizing him as the boss of Gekitotsu Robots, appropriately assumed Ex-Aid Robot Action Gamer Level 3 to face him but soon realized his Level 3 form was at a disadvantage against the Level 30 Bugster. However, using his tactical skill as a gamer, Ex-Aid utilized both Iron-Body and Muscular Energy Items to beat back Gatton who sleep mode and retreated back into Mai Yamato. Ex-Aid wanted to continue the fight, forcing Asuna to cancel his transformation to make him settle down. 「A Sudden Fantasy!?」

was interrupted by the Galaxian ships before they stopped as Kamen Rider True Brave arrived. Later, Ex-Aid would use Robot Action Gamer while leading his own team to fight in the Chou Super Hero Taisen tournament. Facing the Dairangers

in the first round, Robot Action Gamer bested RyuuRanger

and would even prevail against the Game World's iteration of Kamen Rider Genm Zombie Gamer Level X as Team Ex-Aid triumphed over Team Genm in the final round. 「Kamen Rider × Super Sentai: Chou Super Hero Taisen」

In the Game World

Within the pocket Game World, Ex-Aid assumed the Robot Gamer initially to defend himself from Another Agito. Later, Ex-Aid was set upon by Shocker forces before being assisted by the other Kamen Riders, using his Gekitotsu Critical Smash to destroy Yamaarashi-Roid. Eventually, the Riders confronted Totema, a monster that they found unable to defeat before Ex-Aid sustained a sudden Game Over from "Kamen Rider Blade". 「Maze 2: Escape」 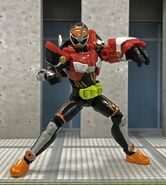 Robot Gamer was released as part of the Level UP Rider Series set LVUR05.