2 (555)
6 (Decade)
3 (Movies)
1 (Net Movie)
1 (Stageshow)
1 (S.I.C Hero Saga)
Full list of appearances
Riotroopers (ライオトルーパー, Raiotorūpā) are a paramilitary force of henchmen from the Kamen Rider Series installment Kamen Rider 555 and the accompanying film Kamen Rider 555: Paradise Lost. They are the first set of "Rider-like" foot soldiers within the franchise. They are also the first case of a Rider originally created for a Kamen Rider movie that was later introduced in the TV series.

They are employed by Smart Brain and are a personal army that fought against the title character Kamen Rider Faiz and his allies. As the show uses the Greek alphabet as a motif, omicron (O) is their Greek symbol, and unlike the other Rider Gears, they seem to possess no Smart Brain number, most likely due to the lack of a phone unit in the Gear. Their data is derived from the Faiz Gear with some modifications for mass production purposes, which results in the suits' resemblance to a simplified Faiz. Both sets of troopers, in the series and in the movie, were destroyed by Faiz in Axel Form. In the TV Series, they were destroyed by Faiz Axel's Axel Sparkle Cut; and in the "Paradise Lost" movie, they were destroyed by the Axel Crimson Smash.

While usually operating as a Rider troop, several unique individuals have also become Riotroopers at several points in the series.

Riotrooper may refer to any of the following characters:

The Smart Buckle was created by Hanagata. There were six belts made to protect the Orphnoch King, but Hanagata said that the belts could also destroy him if they can protect him. Several Orphnoch were selected to wear the belts. They all wore black suits and , similar to Men In Black agents. Naoya Kaidō (the Snake Orphnoch) was originally appointed as leader of the Riotroopers until he found out that Yuji Kiba, the person who gave him the Smart Buckle, was planning to attack Mari and the gang, as well as attempt to kidnap Teruo Suzuki to get the Orphnoch King inside the boy to fully awaken and take over their body while the boy died. This made Kaidō quit being a Riotrooper as he felt Yuji lost his belief in protecting humanity Kaido, with the help of Mihara.

After take a fight with Riotrooper with Masato's disease that he will die soon, he confronts Kiba that he will fight the Orphnoch King. Mari talks briefly with Rina before get kidnapped, once again to lure Kusaka. Hanagata dies from his rapid evolution. As Kusaka Masato confronts Kiba that he joined Smart Brain, Takumi, Kaido, and Mihara kills all Riotroopers as Faiz Axel Form, Snake Orphnoch, and Delta respectively.

A bunch of Riotroopers show up and start attacking people. Kusaka as Kamen Rider Kaixa defeats them on his own.

Mihara as Kamen Rider Delta meets up with Kusaka and Mari, and one more Riotrooper shows up. It seems to be different from the others (Riotrooper ver. 2), and is equipped with the Faiz Edge. Kaixa and Delta fight it and its helmet is damaged and reveals that inside is the Rose Orphenoch. Kusaka thinking that it was Mihara who sent Mari the roses.

With Kaixa and Delta can’t stand up to the Riotrooper v2, they run away with Mari. But then Kusaka grabs Mihara and tosses him back at Murakami, saying that he deserves it for daring to send roses to his beloved woman. Mihara screams that it’s a misunderstanding, and for Kusaka to help him, but Kusaka just sneers and a blue petal lands on his outstretched hand, turning him to ash.

Takumi arrives on the scene and runs into Murakami, now in Rose Orphenoch form as the Riotrooper v2 was badly damaged.

The Smart Buckles are mass produced (approximately 10,000). These wearers were more akin to traditional military unit. Their purpose is to exterminate any human resistance that oppose the Orphnoch race, including the Human Liberation Army. Led by Kamen Rider Psyga, they attacked the human sanctuary until Yuji, Yuka, and Naoya intervened. They were then sent to hunt Mari and Takumi, where Takumi regained his memory as Faiz, then transformed to protect Mari from them. When they are knocked out of their Riotrooper forms, they transform back to their Orphnoch forms.

In Natsumi Hikari's dream, A huge amount of Riotroopers are seen fighting the Rider War in Episode 1, with other Kamen Riders commanded by Wataru Kurenai, but all are defeated by Decade. 「Rider War」

Riotroopers with the other Riders appears when Natsumi remenber your dream of the Rider War, the dream ends shock of fists between Decade and Kuuga .
「The World of Kuuga」

Riotroopers are summoned by Kamen Rider Diend to fight against Kamen Rider Gatack but they are easily defeated by him. 「Warning: Kabuto Running Amok」

In the special version of episode 31, Riotroopers are seen as one of the many Kamen Riders who fought in the Rider War against Decade and were all defeated. They were presumably restored after the destruction (and subsequent revival) of Decade at the end of the Rider War and the worlds were restored. 「The Destroyer of Worlds」

Riotroopers appear in an initial scene of Decade's story in Movie War 2010. Several Riotroopers attack Tsukasa and Yuriko but most are defeated by Decade and the rest are also driven away by Yuriko as Tackle.

In the 10th anniversary show, a Shocker minion named Uu wants to be a Rider. He tells every Shocker minion this and he winds up thrown in prison with Yuusuke Onodera. Yuusuke nicknames his new friend "Uuey-chan". They talk about that dreams are possible and Kuuga teaches him about the Riders. After getting separated, the minion gets turned into a monster and is forced to fight his friend, After Yuusuke got through to his friend, somehow the minion becomes a Riotrooper. Alongside his new allies, he fights Shocker and defeats them.

Type48. - Searching for a Great Treasure Over the Match!

Diend summons three Riotroopers The Riotroopers begin attending to his opponents, fanning Shadow, massaging Garren's shoulders and neck, and serving tea to Chalice. With the other players distracted.

Riotroopers appear as Common Enemies in the video game Kamen Rider: Battride War and also appear with The Horse Orphnoch as bosses .

Riotroopers appears as a boss with others Kamen Riders in the video game Kamen Rider Transcend Heroes.

Riotroopers is a playable character in Kamen Rider Buttobasoul.

Riotroopers appears as a playable character in this trading card game with other Kamen Rider Kamen Rider Heisei-Era , Showa-Era,super sentai,Metal Heroes and other Heroes.

This gear is an upgraded version of the Riotrooper gear created by Murakami for combat in the S.I.C. HERO SAGA, Kamen Rider 555: Lost World.

The Riotrooper V2 wields its own version of Faiz's SB-555H Faiz Edge with a design similar to that of the Axelaygun.

The Riot Trooper transform in the television series differs from the one in "Paradise Lost" movie.

The Riotroopers are portrayed by various suit actors. 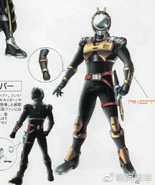