Riki (力（リキ）, Riki) is the human form of the silent Dogga (ドッガ, Dogga), the last surviving member of the Frankenstein's monster-like Franken Race (フランケン族, Furanken Zoku) of the 13 Demon Races.

In 1986, Riki lived in human society as a masseur in Ramon's parlor before moving into the Café mald'amour to work there for a bit, falling in love with Yuri after eating her food. When Jiro left, Riki joined Ramon to become a kakigoori seller until Jiro asked for their aid at defeating the Rook. All three Arm Monsters, Otoya and Yuri eventually managed to defeat him. After some time passes, Ramon and the rest of the Arm Monsters would soon face the Fangire King whom they managed to get away once, then unsuccessfully trying to kidnap Maya to act as a shield from him. As they were faced by the Fangire King once more only to lose again, they were given a choice between dying or killing Otoya themselves. After finding themselves unwilling to kill Otoya to save themselves (as per the King's offer), Riki decides to flee. After seeing Ramon sealed by the King, Riki attempts to run away, but is sealed into the Demon Iron Hammer Dogga Hammer (魔鉄槌ドッガハンマー, Matettsui Dogga Hanmā). They were eventually freed by Otoya during the midst of the battle against the Fangire King. All three soon run away during the confusion. After the Fangire King was defeated, the Arm Monsters decided to go inside Castle Doran, though not before promising Otoya to help his unborn son in his place. This leads to Riki now aiding Wataru in 2008, his Dogga Hammer used by Kiva to assume Dogga Form (ドッガフォーム, Dogga Fōmu).

A rather slow and dim guy, Riki initially acted like an average Fangire, secretly feeding off human life energy while getting mad at any human that doesn`t act the way he wants them to. After meeting Otoya, Riki somewhat changed for the better as he seemingly stopped killing humans. He even went as far as to not kill Otoya when the Fangire King made Riki choose between dying or killing Otoya himself. In 2008, Riki became more obedient and pessimistic while helping Wataru.

In the novel reimagination of the TV series, Dogga, along with Kivat and Bassha, does not exist in the story, as Kiva is Wataru's Fangire form here.

K-Riki
Add a photo to this gallery

Riki has superior strength compared to the other Arm Monsters and feeds by grabbing a person and draining the soul out in the form of electrical discharges. He acts as Castle Doran's butler, assuming his true form by pounding his fists together. He can only speak in a slow, monotone voice, and is thus not as talkative as Jiro or Ramon, usually having one of them speak for him. In addition to his habit of popping his neck, Riki can eat things that are inedible to normal people. In his Dogga Form, Riki is durable enough to withstand being attacked by members of the Checkmate Four despite being weaker than them. He also defeated multiple revived Fangires in 2008 hinting that Riki became stronger as time passed. He along with the other Arm Monsters can also lend their powers to Kiva and presumably future Kiva through Fuestles. This is to the point where they can combine their powers at once to assume DoGaBaKi Form and DoGaBaKi Emperor Form.

The Dogga Hammer's finishing attack is the Dogga Thunder Slap (ドッガ・サンダースラップ, Dogga Sandā Surappu), before which Kivat must perform a Dogga Bite (ドッガバイト, Dogga Baito) on the shaft of the hammer. The ball of the hammer opens up like a hand to reveal the True Eye (トゥルーアイ, Turū Ai) in the palm, which can pinpoint a Fangire's exact location or release a shockwave that weakens the opponent Fangire's glass skin, rendering it immobile. Then the head of the hammer produces a giant energy duplicate of itself called the Phantom Hand (ファントムハンド, Fantomu Hando), which follows Kiva's swings and crushes the enemy with massive collateral damage. [1]

Due to the Dogga Fake Fuestle tracing Dogga's frequency, the Dogga Hammer can be used by Ixa. Although it does not cause Ixa to change into a new form as Kiva does, it retains its power and effect regardless. However, Ixa has only been shown using the Garulu Saber, the Dogga Hammer and Basshaa Magnum were not shown being used by Ixa in the series' run.

The Dogga Hammer consists of the following parts:

There are three Fuestles (フエッスル, Fuessuru) in the possession of Kamen Riders Kiva, Ixa and Dark Kiva respectively, which allow access to Dogga's power.

Kiva's Dogga Fuestle
Add a photo to this gallery 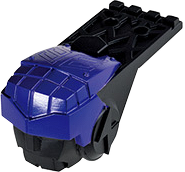 Ixa's Dogga Fake Fuestle
Add a photo to this gallery 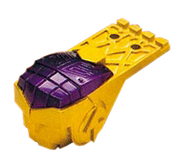 Dark Kiva's Dogga-Seal Fuestle
Add a photo to this gallery

The word "dogga" (ドッガ, "dogga") is a Japanese onomatopoeic sound representation of a great thud; in the case, a hammer hitting, while "Riki"'s name is spelled with the same kanji for "power" (力, chikara).

Dogga (2008) concept art
Add a photo to this gallery

Retrieved from "https://kamenrider.fandom.com/wiki/Riki_(Kiva)?oldid=677730"
Community content is available under CC-BY-SA unless otherwise noted.