Right and Wrong Conflict (正・邪・葛・藤, Sei・Ja・Kat・Tō) is the sixteenth episode of Kamen Rider Fourze. It is the concluding part of the festive Perseus arc. This episode marks the debut appearance of Kamen Rider Meteor following the Secondary Rider's 'early bird-cameo' at the end of Movie War Mega Max.

The Perseus Zodiarts seems to be too powerful for Fourze to stop on his own, however, the appearance of the new Kamen Rider Meteor may change this battles ending...

Having his Last One form recreated, the Perseus Zodiarts begins to glow with a new power, which Principal Hayami reveals to be the power that will allow him to become one of the Horoscopes. The Perseus Zodiarts is now capable of firing a petrification beam from his Medusa hand, which he uses on Kamen Rider Fourze, striking his hand and turning it to stone. But when Kamen Rider Fourze reminds him of his obligation to give the kindergarteners his painting and the fact he can not return to his human form, the Perseus Zodiarts runs off to finish his painting while unaware that he is being followed by a black and blue figure.

Back at the Rabbit Hatch, the Kamen Rider Club try to figure out what to do about Gentaro's stone hand as Kengo points out that they must get Motoyama back into his body before he is stuck in his Zodiarts body permanently. While Yuki goes back to the glee club to prepare for the kindergarten show, Kengo has Gentaro test out the Pen Switch, but he cannot figure out what purpose its ink-like powers have. Gentaro decides to use a different approach against the Perseus Zodiarts and takes a Hulashake with him should he need help. He goes out to find the Perseus Zodiarts and he challenges him to a drawing contest. If Gentaro wins, then Motoyama must return to his body. If Gentaro loses, the Perseus Zodiarts can encase him in stone. When Gentaro finishes, the Perseus Zodiarts sees that his drawing is poorly done, but he cannot seem to destroy it because he realizes that Gentaro put his heart into the drawing.

However, when he makes his way to the kindergarten, he hears the children enjoying the "Hayabusa-Kun" performance and also sees a series of drawings the children made to emulate his drawing from the previous year. His attention is then directed to Gentaro being carried by Kengo and Shun, with Gentaro being fine as Kengo explains that his reluctance to turn Gentaro to stone made the effect only temporary. Realizing that he was a fool for not realizing that he was only satisfying himself, the Perseus Zodiarts accepts Gentaro's friendship while agreeing to become human, while losing the glow that would have allowed him to change into one of the Horoscopes.

He then uses the restored Rocket and Drill Switches to destroy the Perseus Zodiarts with the Rider Rocket Drill Kick, returning Motoyama to his body. After the Libra Zodiarts falls back, the mysterious Kamen Rider drives off without a word. Later, as Motoyama begins his drawing anew, the Kamen Rider Club's Christmas party commences until the club members find Gentaro abusing the Pen Switch for decorative purposes, which consisted of drawing "Merry Christmas!" in katakana and a poorly drawn reindeer on the moon, infuriating Kengo. 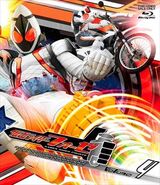 Retrieved from "https://kamenrider.fandom.com/wiki/Right_and_Wrong_Conflict?oldid=583611"
Community content is available under CC-BY-SA unless otherwise noted.