A Rider Gauge (ライダーゲージ, Raidā Gēji) is an energy meter on the chest armor plating of a Kamen Rider. Its function is to act as a way for the user of a Gamer Driver to see how much damage they have taken. If the Gauge energy reaches its lowest point, an alarm klaxon will sound and the Gauge will flash. The Rider or Riders in question who are in this predicament must do one of three things:

While Lazer Bike Gamer Level 2 is not in human form, the main Gauge is hidden and two side Gauges appear on both sides of the bike form. Each side Gauge has only half of the normal Gauge energy, each also have all four buttons. The Bike Gamer summoned through Bakusou Bike Gashat also have side Gauges and are full of energy. When Lazer Bike Gamer Level 2 levels up to higher levels, the main Gauge reappears on his chest. While the side gauges are kept, now relocated to his shoulder pads, their purpose is now solely aesthetic, as all functionality is shifted to the main gauge. This also carries over to Ex-Aid Bike Action Gamer Level 0.

Legend Rider forms do not have their Rider Gauges visible on the chest armor. It is instead replaced with detail resembling the chest designs of their respective Legend Riders. Ride-Players also do not have a Rider Gauge, as the intent of Kamen Rider Chronicle is to kill the users with as little effort as possible. Thus, Ride-Players possess a limited threshold for a certain amount of damage they may sustain before dying from a Game Over.

Possibly due to their nature as Bugsters, Kamen Riders Para-DX and Poppy do not have a Rider Gauge in their default forms, though a Rider Gauge is present on Para-DX's Level 99 form. This is most likely due to the reprogramming performed on him by Emu that gave him human data and the ability to use a Gamer Driver.

While Cronus retains the four-button design on his chest, the rest of his Rider Gauge is instead replaced with a unique pattern.

When a Rider Gauge is fully depleted, it will flash red for a few seconds, and the Kamen Rider will be deceased. Genm cheated the process at this step by using the Gashacon Bugvisor to transfer the data of his death away from him and into the Dangerous Zombie Gashat. [Who's the Black Kamen Rider?] Assuming no interruption, the Rider's transformation is broken and he will collapse in exhaustion. His body, covered with yellow sparks, begins to glitch-out and turn transparent. After a few minutes, a "Game Over" announcement is heard from the Gamer Driver as the Rider is deleted from existence. [Christmas Special: Targeting the Silver X mas!] Parado's forceful infection of Kuroto with Dangerous Zombie caused him to fade and die while out of his transformation, though "Game Over" was still announced. [To The Max, Dead or Alive!] It would eventually be revealed that the Proto Gashats contain the data of those who have vanished.

In Kamen Sentai Gorider, during an incident where Emu was trapped in the Game World, he is mortally wounded by Kuroto Dan who disguised himself as Kazuma Kenzaki/Kamen Rider Blade. He is then given a Game Over by Totema, before he regains consciousness back in the real world. [Maze 2: Escape]

A notable exception to the Game Over rule is when the Rider fails to follow the objective of the game they are playing, as seen when Brave defeated Motors in the VR game Bakusou Treasure and when Ex-Aid failed to bypass the treasure door after being attacked by a security unit assuming the form of Genm. [Kamen Rider Ex-Aid "Tricks": Kamen Rider Lazer] 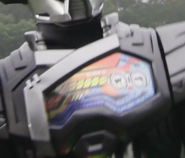 Lazer's Rider Gauge warning that his time is up 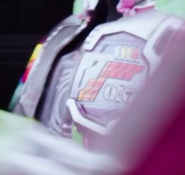