A group of archaeologists open a tomb that awakens horrible monsters, while journeyman Yusuke Godai is compelled to access a strange belt from the tomb to fight back against them.

The episode begins with a flashback showing Riku, the original Kuuga, fighting many Gurongi in his four basic forms. After defeating all the Gurongi, Riku is shown sealing himself away in a sarcophagus. In the present day, a group of archaeologists finds Riku's sarcophagus, and as the researchers open the sarcophagus they comment on how they can't believe that something like it was made in Japan. The mummified Riku's hand then twitches, but this goes unnoticed by the group.

Outside the airport, Yusuke Godai talks to a young crying boy who lost his parents, saying that he always thought guys who could smile through hardships were cool. He then tells the boy about the time when he was 8 and got lost on a peak called Annapurna in Nepal. Yusuke then begins juggling, getting the boy to stop crying and Yusuke gives him a thumbs up. Soon after, the boy's parents find them and thank Yusuke for finding him.

Sakurako Sawatari is shown examining photos of Riku's sarcophagus on her computer. She answers the telephone-the person at the other end of the line is named Makoto. Sakurako tells him that she's busy deciphering ancient text from the Kurougatake ruins, and tells Makoto that other civilizations may have had similar texts. At this point Sakurako's co-worker leaves, leaving her alone in the office. Sakurako then tells Makoto that the inscription isn't related to a curse. A masked figure then climbs up the vines on the outside of the building, climbs in the window, and sneaks up behind her. Before turning around, Sakurako tells the masked figure, who she knows to be Yusuke Godai, not to come in through the window. Yusuke then asks Sakurako about climbing the building, and she retorts with the fact that people will complain to them about him scaling the building. Yusuke then gives Sakurako the mask he was wearing, saying that it was a souvenir from Indonesia and that it works as a talisman. Sakurako then asks Yusuke if he wants coffee, but he says he can't because he has was headed to the Kurougatake ruins. However, at that moment Sakurako's computer gets done translating two of the glyphs from the ruins, one of them meaning "death" and other meaning "warning", and Sakurako calls the investigation team to discuss it.

The team's equipment begins to malfunction. As one of the archaeologists calls the police asking for help, their recording equipment tapes a mysterious shadowy figure that was attacking them.

Sakurako hears the group's cries for help over the phone and taken aback, asks Yusuke how they should respond to it. However, Yusuke has already headed out the door and says that he'll go over and take a look.

Yuusuke is driving his bike down the road in the rain when he stops at a red light, looks over, and sees a large light blue energy beam shooting into the sky from the Kugrogatake ruins. The beam then releases many bolts of electricity into the surrounding air.

The shadowy figure that attacked the archaeology group, which will later become known as N-Daguva-Zeba in his incomplete form (or Unidentified Life Form #0), is seen walking through the forest with a blue aura with trees exploding around him. #0 then shoots energy at the ground and says something in the Gurongi language, which causes several monstrous hands to rise out of the ground as all the Gurongi that were defeated by Riku are revived.

The Police, including detective Kaoru Ichijo, have already arrived and have begun to investigate the scene. Detective Ichijo comments that the blast was "a bit much for lightning", and also checks with one of the officers if it was possible that the light came from an explosion. The officer replies that he asked Kyushu University about it, but they didn't have any records of local earthquakes. Yusuke is then shown to be observing the site from the tree line, and upon seeing the entrance to the ruins Yusuke gets a brief vision of the Arcle that surprises him enough to make him jump back. Yusuke then tries to sneak on to the site by running past detective Ichijo, saying "sorry I'm late, I will get back to work," but the detective stops him and asks who he is.

At which point Yusuke asks "sneaking in no good", and the detective asks him what he is doing at the site. And Yusuke simply replies "warning of death," and then explains that was what Sakurako's translation of the ancient text at the ruins. At that point, the detective asks Yusuke if he was related to the investigation team, and after explaining that he was "just passing through," Yusuke hands the detective his card which reads "Godai Yusuke, A Man Who Chases Dreams, Possessing 1999 skills." Detective Ichijo then asks an officer to take Yusuke to a patrol car. On the way to the car, Yusuke distracts the officers by pointing at the sky and commenting that he saw something, allowing him to escape and run towards the ruins.

Detective Ichijo sees this and blocks his path, but Yusuke evades him by ducking under his arm. However, the detective then grabs Yusuke's ankle, causing him to trip, and the detective catches Yusuke before he falls and hits his head on a metal box. Ichijo then tells Yusuke that if he keeps interfering he will arrest him. At this point, Yusuke begins to leave, but then he sees an officer carry the Arcle out of the ruins in a large evidence bag. This causes Yusuke to have another brief vision, this time including a vision of Riku transforming into Kuuga's Mighty Form. Before he leaves, Yusuke also gets a good look at one of the glyphs on the side of the Arcle.

Yusuke is outside the building and meets up with Sakurako, who he faxed a drawing of the glyph from the Arcle to. Then Detective Ichijo meets them outside, and Yusuke introduces the two of them. Later, inside the building, Ichijo shows the two of them a videotape, which was the only thing to survive. He tells them that everyone died because they were frozen in a state of shock and fear.

They then watch the videotape, which shows Riku's sarcophagus being lifted up from under it and tossed aside, then a shadowy N-Daguva-Zeba climbs through the hole that was under the sarcophagus. N-Daguva-Zeba then holds up a belt, possibly the Arcle. The cries for help that were heard in the initial recording then begin. After ending the video, Ichijo points out that it looked like the shadowy figure was attacked by the figure wearing the belt. Ichijo says this concerned him and that he wanted the original investigators to continue their work. and that he pulled a few strings and got the Arcle out of evidence for them. An officer then enters the room and whispers something to Ichijo, who excuses himself and thanks Yusuke and Sakurako.

After the detective leaves Yusuke asks Sakurako what the glyph he faxed her meant and she replies that its meaning was "Chikara", or "Power".

Several officers are responding to a disturbance where an unknown creature had created a giant spider web in the city. The officers are then attacked by the creature, which is Zu-Gumun-Ba or Unidentified Life Form #1. The officers open fire on the Gurongi, but it is revealed that it is resistant to gunfire. The Gurongi then attacks and kills all the police officers, and even chases down one that attempts to escape in a car.

Yusuke and Sakurako are on their way out of the building when suddenly a patrol car drives through the door. Zu-Gumun-Ba then crawls out of the passenger side door on all fours. The Grongi stands up and looks at the Arcle, which has fallen out of its case. The Arcle suddenly glows with a bright white light, which triggers another vision of Kuuga fighting Gurongi in Yusuke. The Gurongi then starts attacking everyone in the building, which makes Yusuke angry. Just as the Gurongi goes for the Arcle, Yusuke grabs it and tells Sakurako to hide. Yusuke then puts the Arcle on and it absorbs into Yusuke's body, causing him intense pain.

The Gurongi then tosses Yusuke outside and then continues to beat him. Yusuke realizes that he will die if this continues, so he punches the Gurongi. As he does, Yusuke's arm transforms to be white and armored looking, Yusuke then punches and kicks the Gurongi and he changes more with each hit until finally he completely changes into Kuuga Growing Form. However, this transformation seems to have stressed Yusuke's body--he falls to his knees, which the Gurongi takes advantage of in order to toss him even more. 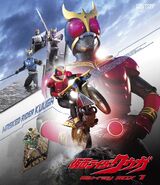