The true origins of Rento was a robot toy from Sougo Tokiwa's childhood, who he considered as his sole "companion" after being secluded from other children who ridiculed his dream as a king. This toy was written with the English phrase "WILL BE THE KING" on its back, as Junichiro Tokiwa rediscovered it years later and fixed the toy.

As a result of Sougo's increasing temporal abilities, the year 2121 came into existence with Rento being born from Sougo's robot toy. Rento started as a fellow Humanoise who managed to conquer Earth and suppressing the humans but switched sides when befriending Maruko and a group of children. Since then, Rento defended the humans and use his recharging period to entertain his friends.

While he was studying for his make-up exams, Sougo fell asleep while studying and began dreaming of being in the future. While being attacked by the Humanoise, the malevolent robots that resemble humans, Sougo found himself rescued by Rentaro Makina, who transformed into Kamen Rider Kikai. Sougo learned that he had befriended the human children and often entertained them. While recharging, the satellite that he often use recharge was hacked and reverted Kikai back into his primary Humanoise directive.

"Thank you Sougo. I knew you were my BFF."
―Rento expressing his gratitude.[src]

After briefly attacking Sougo, Kamen Rider Kikai ambushed his own group at a human refugee camp alongside other Humanoise until Kamen Rider Zi-O II disabled him with Twice Time Break. While sleeping during his make-up exams, Sougo used the password "Will Be the BFF" to restore Rento back into his original programming. Once restored, Rento thanked him, firming his believe that Sougo is his best friend. He and the children waved goodbye to Sougo, who was awake long enough to continue and pass his test.

Rento transforms into Kamen Rider Kikai (仮面ライダーキカイ, Kamen Raidā Kikai) by inserting the Spannerder and Screwder together at the center of the Kikaidriver. Kikai's stats are the highest of the other riders, but is one of the slowest of the riders in the series, and most of his attacks uses ice energy.

By touching the Destructo Reactor grips of the Kikaidriver, Kamen Rider Kikai can initiate one of three attacks: 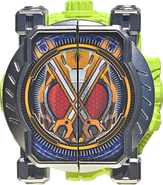 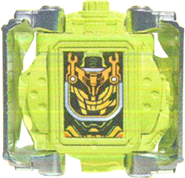 Rento Makina is portrayed by actor Jingi Irie (入江 甚儀, Irie Jingi), who is best known for his roles as Kikaider (REBOOT) and Zamigo Delma

Rento Makina's last name is a pun on the word "machina" (マキナ, Makina). In addition, the word for "machine" in Tagalog/Filipino is also "makina".