Protagonist (In Shinobi)
Hero (Currently)
Villain/Monster (Formerly; as Another Shinobi)

Another Riders (as Another Shinobi)

"Writing the way of Shinobi with the blade of my heart! Kamen Rider Shinobi!"
―Shinobi's introduction to Sougo.[src]

Rentaro Kagura (神蔵 蓮太郎, Kagura Rentaro) is a young man from the year 2022 who fights as Kamen Rider Shinobi (仮面ライダーシノビ, Kamen Raidā Shinobi) in an alternate timeline. However, his powers were stolen in the future and given to his younger self in 2019 who became Another Shinobi (アナザーシノビ, Anazā Shinobi).

When he was beaten by thugs after standing up for a friend, a 22-year-old Rentaro Kagura's desire for strength reaches Heure, who imbued him with the Shinobi Anotherwatch, transforming him into his corrupted future self. The Anotherwatch manipulated Rentaro's negative emotions and against his will, and forced him to go on a vigilante spree, attacking the thugs from earlier before fighting against Kamen Riders Zi-O and Geiz. Although he doubts by his actions due to the Anotherwatch influences, Sougo's encouragement reaches him, allowing Rentaro to give a some resistance against Swartz. After White Woz obtained the Shinobi Miridewatch, he uses it to defeat Another Shinobi and save Rentaro.

Although Sougo Tokiwa reclaimed his power to become Kamen Rider Zi-O, the decision to temporarily give up the Ziku-Driver managed to diverge the timeline to new outcomes. During the new year, he dreamt of arriving in the year 2022. When he is attacked by Stardust Ninja Dustards, he found himself saved by the arrival of Rentaro Kagura who transformed into Kamen Rider Shinobi.

Swartz, discovering his existence, stole Shinobi's powers from an Anotherwatch and gives it to Heure. This led to Rentaro's younger self gaining his corrupted powers in 2019, putting Kamen Rider Shinobi's existence in jeopardy until Another Shinobi's defeat at the hands of Kamen Rider Woz.

In an alternate 2022, Rentaro is a bumbling ninja living in a ninja society iteration of Japan and combats the evil ninja clan Niji no Hebi as Kamen Rider Shinobi. He is training under the mentorship of Master Gamano, who is a scroll painting of a toad. Rentaro continues to protect his sister, Iroha Kagura, who is believed to be the princess of Niji no Hebi clan. He reunites with his childhood friend, Isamichi Konjo, who managed to become Kamen Rider Hattari.

Kamen Rider Hattari had developed a rivalry against Shinobi due to Iroha Kagura having a crush on the violet ninja, unaware that he is her older brother. He soon encounters the ringleader of the Niji no Hebi clan, Yaminin, who proved to be a powerful threat due to his abilities that Shinobi and Hattari struggle to fight against even together. While Kamen Rider Shinobi's journey has yet to begun nor end, he will continue to protects the weak from those who misuse their powers for evil.

Rentaro is a brave, strong-willed individual who protects the weak from those who misuse their powers for evil in 2022. However, in 2019, he himself is rather weak and willingly let himself be victimized by the people who harassed his friend. This also drove him with the desire to gain the power to get back at those people, which leads to him becoming an Another Rider.

In Rider Time: Kamen Rider Shinobi, Rentaro is shown to be a skilled ninja, while pretending to be unskilled in order to keep his identity as Shinobi a secret. Due to his responsibilities of protecting his sister Iroha as Shinobi, Rentaro is frequently unemployed due to missing job interviews and constantly struggling to keep up with the bills, such as being unable to pay the electricity. Because of this and his seemingly bumbling false persona, Iroha sees him as unreliable and urges him to do better. Despite this, Rentaro genuinely loves Iroha and will go out of his way to protect her.

Rentaro Kagura transforms into Kamen Rider Shinobi (仮面ライダーシノビ Kamen Raidā Shinobi) by slotting the Shuriken Starter on the Shinobidriver and spinning it. Shinobi’s punching and kicking stats are lower than Zi-O, Geiz, Kikai and Woz, and his agility is better than the other riders, but his main attacks involve ninjitsu.

"Beyond The Time! Ninpou! Jikan Shibari no Jutsu!"
―Finisher announcement[src] 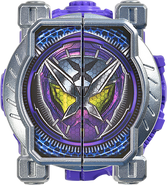 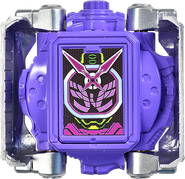