"The Master's will is my will. I'm the one who'll turn his ideals into reality!"
―Reika's creed of following Master Logos[src]

Reika Shindai (神代 玲花, Shindai Reika)[1] is a member of the Southern Base-branch of the Sword of Logos, who acts as an assistant and personal enforcer of the organization's leader, Master Logos. Due to the growing threats against the organization, she is put on active duty and transforms into Kamen Rider Sabela (仮面ライダーサーベラ, Kamen Raidā Sābera) to fight against Touma Kamiyama and his team.

Reika is introduced as a messenger of the Southern Base, who travels to the Northern Base to observe the new Saber, Touma Kamiyama.Chapter 9: Overlap, the Swordsman's Timbre. When she meets with Kento Fukamiya, Reika gives him the Tri Cerberus Wonder Ride Book to aid him in his fight against Calibur.Chapter 10: Crossing Swords, and Crossing Feelings.

After a meeting between Sophia and Daichi, Reika used the power of Eneiken Noroshi to abduct Sophia by the orders of Master Logos.Chapter 11: Disturbed Thunder, Spreading Dark Clouds..

Shortly after Daichi Kamijo's death, Reika tries to swindle Touma to the Southern Base. After he refuses, she uses her position as the messenger of the Southern Base to assume control of the Northern Base and convince its swordsmen that Touma has turned against them, all to force the Kougouken Saikou, the light counterpart of the Ankokuken Kurayami, to appear after being thought lost for a thousand years.Chapter 16: Saving the World, A Ray of Light.

Working within the Smoke

After a fight between Saber and Buster, both of them accidentally dropped their own Wonder Ride Books and Reika used the power of Eneiken Noroshi to steal the books.Chapter 24: On My Father's Back, the Future He Carried.

In the wake of Slash and Buster's defections, Master Logos places her on active duty. She goes to confront them at the Northern Base and defeats them with ease. Just as she is about to take their Wonder Ride Books, Touma and Rintaro arrive on the scene; she orders Rintaro to kill Touma, but he hesitates. She manages to hold her own against Saber Primitive Dragon for some time before being driven off by Kamen Rider Calibur.Chapter 25: Clad in Smoke, the Crimson Assassin.

She later interferes in the fight between Saikou and Calibur, succeeding in stealing the Hanselnuts and Gretel book after Calibur defeats Slash and seals Suzune.Chapter 26: Deep Darkness, With a Sword.

During her initial appearances, Reika displayed a calm, sensible, and mysterious aura, observing the fights of the Northern Base swordsmen from afar and drawing her own conclusions. However, she is revealed to also be highly calculative, using half-truths to easily swindle even the most experienced swordsmen and and close friends of Touma at the Northern Base against him.

Because of her blind loyalty to Master Logos, she deems his orders absolute and will by all means do whatever it takes to make sure his demands are met without question, and will resort to violence against those who disagree with or defy him. The only time she was seen expressing genuine happiness was when she got praised by him for her loyalty.

Ryoga Shindai
Older Brother
Add a photo to this gallery

In this form, Sabela outclasses Saber Primitive Dragon in every area, but with the exception of a slightly slower running speed. However, Primitive Dragon's purely ferocious combat style gives it a noticeable edge against Sabela's graceful techniques. Being the swordswoman of smoke, she can teleport by turning into a mass of smoke, and become intangible by turning some parts of her body to smoke itself. Through the use of her Wonder Ride Book, she can sprout butterfly wings or spider legs from her back, and spew spider silk from her hands. 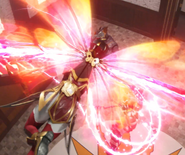 Sabela with spider legs
Add a photo to this gallery

Retrieved from "https://kamenrider.fandom.com/wiki/Reika_Shindai?oldid=687657"
Community content is available under CC-BY-SA unless otherwise noted.