In 1986, he lived in human society as a shoeshine boy while aiding Jiro out of common interest, though confused by the Wolfen's methods as he should be in hiding and feeding off of humans in secret.

When the parlor he lived in closed, Ramon started to work at the Café mald'amour as a greeter until Jiro left and became a kakigoori seller when Jiro asked for his aid. After fighting off the Rook with help from Jiro, Riki, Yuri and Otoya, Ramon decides to work alongside Riki at a number of jobs. Ramon soon encounters a greater threat in the form of the Fangire King who decides to kill all the three Arm Monsters. Finding even more misfortune after escaping the Fangire King when Ramon, Jiro and Riki tried to kidnap Maya and failed, it seemed all was lost for them when the Fangire King appeared again while easily overpowering all three Arm Monsters once more. However, it seemed luck soon came to them when the King offered a choice between getting killed themselves or killing Otoya at their hands. After trying and realizing that all three were unwilling to kill Otoya to save themselves (as per the King's offer), Ramon decides to flee. But he is attacked by the King moments later and sealed into the Demon Sea Gun Basshaa Magnum (魔海銃バッシャーマグナム, Makaijū Basshā Magunamu). Otoya soon saves them as well as stopped the Fangire King at the cost of his own life. At the aftermath of these events occurring, all three Arm Monsters decide to enter Castle Doran to stop it`s rampage. Before they can do so Otoya appears in front of them (seemingly as a ghost) and asks that they take care of Wataru in his stead when he`s born. They accept and eventually watch over him after his birth. This leads to Ramon now aiding Wataru in 2008, with the Basshaa Magnum allowing Kiva to assume Basshaa Form (バッシャーフォーム, Basshā Fōmu).

Ramon appears with his fellow Arms Monsters in Cho Kamen Rider Den-O & Decade NEO Generations: The Onigashima Battleship for some short period. He was possessed by Ryutaros.

A happy go lucky person, Ramon is the most cheerful of the three Arm Monsters. Often having a carefree attitude, Ramon affectionately calls Wataru Oniichan despite being much older than him in actual age. Although carefree most of the time, Ramon proves that he actually cares for people close to him as evidenced by him unwilling to kill Otoya despite his own life being at stake.

In the novel reimagination of the TV series, Basshaa, along with Kivat and Dogga, does not exist in the story, as Kiva is Wataru's Fangire form here.

R-Ramon
Add a photo to this gallery

While looking vulnerable compared to his friends, Ramon is able to assume his true form by spinning then snapping his fingers. He can shoot pressurized water bubbles from his mouth and his pupils turn into crosshairs to increase his aim. Basshaa is Castle Doran's housekeeper, assuming the form of a 13-year-old boy in a School Gakuran outfit while using his cunning and telekinetic abilities to mess with his housemates in their games from time to time. As Basshaa, Ramon is quite durable as he withstood being attacked by members of the Checkmate Four. He also fought multiple revived Fangires in 2008 hinting he became stronger as time passed. He along with the other Arm Monsters can also lend their powers to Kiva and presumably future Kiva through Fuestles. This is to the point where they can combine their powers at once to assume DoGaBaKi Form and DoGaBaKi Emperor Form.

Replay: Humans are All Music

TBD (Kiva)
TBD (Movies)
TBD (Specials)
Full list of appearances
The Demon Sea Gun Basshaa Magnum (魔海銃 バッシャーマグナム, Makaijū Basshā Magunamu) is a gun-like weapon that Basshaa assumes for Kiva to change into Basshaa Form. The Basshaa Magnum's turbine spins to generate bullets made of high pressure water. The finishing attack is Basshaa Aqua Tornado (バッシャー・アクアトルネード, Basshā Akua Torunēdo). This is done by first having Kivat perform a Basshaa Bite (バッシャーバイト, Basshā Baito) on the hammer of the Basshaa Magnum. From there, the gun's turbines spin, surrounding Kiva with an Aqua Field (アクアフィールド, Akua Fīrudo), a field of water, as the weapon creates a pressurized ball of water that can home on to enemies upon firing, leaving the Fangire in an extremely fragile state where even the slightest touch can shatter them.[1]

Ixa
Due to the Basshaa Fake Fuestle tracing Basshaa's frequency, the Basshaa Magnum can be used by Ixa. Although it does not cause Ixa to change into a new form as Kiva does, it retains its power and effect regardless. However, Ixa has only been shown using the Garulu Saber, the Basshaa Magnum and Dogga Hammer were not shown being used by Ixa in the series' run.

The Bassha Magnum s composed of the following parts:

There are three Fuestles (フエッスル, Fuessuru) in the possession of Kamen Riders Kiva, Ixa and Dark Kiva respectively, which allow access to Basshaa's power. 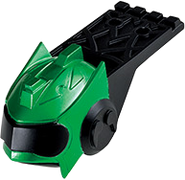 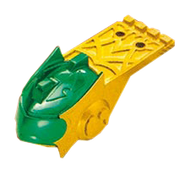 Dark Kiva's Basshaa-Seal Fuestle
Add a photo to this gallery

The word "basshā" (バッシャー, "basshā") is a Japanese onomatopoeic sound representation of a splashing effect.

Basshaa (2008) concept art
Add a photo to this gallery

Retrieved from "https://kamenrider.fandom.com/wiki/Ramon?oldid=677729"
Community content is available under CC-BY-SA unless otherwise noted.