Protean Secret Maneuver (変・幻・暗・躍, Hen・Gen・An・Yaku) is the fourth episode of Kamen Rider Fourze. It is the concluding part of the Chameleon arc, ending with Miu joining the Kamen Rider Club.

Gentaro decides to help Miu retain her title as Queen and Fourze goes after the Chameleon Zodiarts to protect Miu.

Watching the events of Miu losing the student body's love unfold, Fourze realizes the Chameleon Zodiarts planned that turn of events from the beginning as the monster takes its leave. Gentaro arrives back to the auditorium just as Tamae limps back on stage. Gentaro asks Miu if she is okay, but she lashes out at him and leaves. Meanwhile, a smile forms on Tamae's face as she holds a Zodiarts Switch out of sight. The next day, after Yuki worries about her low scoring, Gentaro leaves the classroom out of frustration, and Kengo realizes that the Zodiarts's target is Miu with either of her sidekicks to benefit the most on her loss.

But as Yuki points out that both sidekicks were attacked, Kengo leaves class to study what Burgermeal caught on its camera for clues. When Miu heads to her locker, Tamae suggests that she drop out of the contest rather than lose it, to which she lashes out at her for feeling sorry for her. She goes outside to ask Shun to talk with her, as Tamae tells Jun to pick sides after she starts to feel bad for Miu. Kengo heads to the Rabbit Hatch to look over Burgermeal's footage when he sees Gentaro practicing using the Hopping Module outside. He commends Gentaro on how hard he works, which reminds him of Miu.

After accosting JK for information, Gentaro finds Miu at the school's bowling alley. Miu thinks he is there to gloat on winning the bet, as she is planning on dropping out of the contest, when Gentaro encourages her not to quit and to give a speech to override the video. However, the Chameleon Zodiarts appears and attacks them until Kengo arrives to reveal that the Zodiarts is actually Tamae. She reveals herself, saying remorsefully that she was only jealous of how Miu had always won and that the Scorpion Zodiarts gave her the Switch so she could win. Miu goes to comfort her when she transforms, again, attacking Miu and leaving her seriously hurt. Gentaro transforms into Fourze to chase after her, until the Scorpion Zodiarts intervenes and lets her escape.

At a hospital later that night, Yuki suggests that they tell the school to cancel the competition, but Gentaro tells her they cannot. The next day, after taking Shun's bouquet for show and reminding Jun not to outshine her, Tamae prepares for the Queen Festival finals. As the competition begins, the emcee calls on Miu to take the stage, but Tamae says that she has run away, and she will be a better queen than she was by not thinking highly of herself and leaving when things get out of hand. However, Miu arrives and reveals that she only hated the gifts because the students should not work to impress her but work to make themselves better, and the person who makes herself the best is the one fit to be Queen. She and Gentaro shake each other's hands in Gentaro's unique way. The student body applauds her, as Tamae walks off stage to use the Zodiarts Switch once more, even though it has made its Last One announcement.

Kengo tries to talk her out of using it, but she activates the Last One and leaves her body behind. She abducts Miu out of the auditorium, and Gentaro transforms into Fourze and gives chase. However, he cannot land a punch as the Chameleon Zodiarts uses Miu as a human shield, and then threatens to throw her off of an overpass unless Gentaro ends his transformation. Miu uses the opportunity to taunt Tamae being nothing more than a wannabe, pushing the Zodiarts over the edge when she throws Miu off of the bridge. However, realizing Miu's reason for it, Kamen Rider Fourze has activated the Magic Hand Module and catches her, before finally destroying the Chameleon Zodiarts with the Rider Rocket Drill Kick and turning off the Zodiarts Switch.

As Tamae awakes, Gentaro asks to be her friend until Miu pushes him out of the way and encourages Tamae to work harder if she wants to win next year. Later in the Rabbit Hatch, Yuki is upset that Miu has won for a third year in a row and that she never got to give her speech, when Gentaro comes in with Miu. In order to stay in school, Gentaro has told Miu about the Kamen Rider Club and made her a member. Miu explains that a Queen needs to know all of the school's secrets and she makes herself the club president. Yuki gets upset, because she has been in the club longer and has seniority. As the girls argue, Kengo leaves Gentaro to clean up the mess he has made. 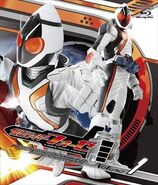 Retrieved from "https://kamenrider.fandom.com/wiki/Protean_Secret_Maneuver?oldid=491558"
Community content is available under CC-BY-SA unless otherwise noted.