The Progrise Hopper Blade (プログライズホッパーブレード, Puroguraizu Hoppā Burēdo) is the primary weapon of Kamen Rider Zero-One MetalCluster Hopper. Its use causes MetalCluster Hopper to connect to Zea instead of the Ark, allowing Zero-One to be in control of his body. It also has the power to restore a Humagear that has been corrupted by the Ark to its original programming. It was produced by the Hiden Intelligence Three Dimensional Printing System using the data of the Humagear Progrisekeys along with the Rising Hopper Progrisekey. Later, the Progrise Hopper Blade was transferred to HIDEN Manufacturing after the event of the Workplace Competition.

Although this weapon is shown to remove the viral programming and save the body of the Humagear, it will not do the same to MetsubouJinrai.net members, as shown in Episode 35, as they willingly follow the Ark's influence.

The Progrise Hopper Blade is composed of the following parts: 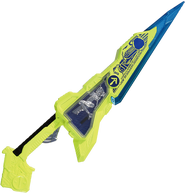 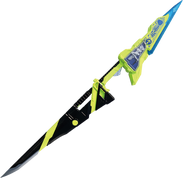 Naginata Mode
Add a photo to this gallery

Ultimate Strash (Step 5: Circular slash and caption)
Add a photo to this gallery

Retrieved from "https://kamenrider.fandom.com/wiki/Progrise_Hopper_Blade?oldid=665581"
Community content is available under CC-BY-SA unless otherwise noted.