Principle or Pathos (理・念・情・念, Ri・Nen・Jō・Nen) is the fortieth episode of Kamen Rider Fourze.

As the Taurus Zodiarts, Sugiura continues to stifle everyone's creativity, but Ryusei (as Meteor) challenges to a game of golf to get everything back to the way it was, while Gentaro and Yuki try to find out why Yuta had changed.

Accepting a challenge in his own element and to release his victims upon losing, the Taurus Zodiarts takes his leave, as the Virgo Zodiarts is about to follow. But Kamen Rider Meteor demands it to halt for answers for her agenda, only to be assured that it is not on the Kamen Rider Club's side as it teleports away. Later that night at a golf course Miu rented, the Kamen Rider Club finds the odds are against Ryusei as he does not know the first thing about golfing.

The next day, Tomoko finds herself on the run from the Student Council before she is saved by Emoto. Thanking him, Tomoko learns that even though his friend Rokuro Utahoshi died on the moon, he is still collecting moon-related items. This inspires Tomoko to find a moon rock to give to Emoto, only to discover that the supposedly kind scientist is actually the Virgo Zodiarts as she witnesses him reverting to his human form before running off.

Meanwhile, discussing what they learned from Sayaka on the conditions of her injury and his resulting mindset for his ideal justice, Gentaro stops Sugiura as he is about to punish Oki for when she failed to let Tomoko escape. Though Gentaro becomes Kamen Rider Fourze, the contract makes him unable to fight the Taurus Zodiarts, forcing Yuki to use the Foodroids to cover their escape as Kamen Rider Fourze uses the Wheel Switch. In response, the Taurus Zodiarts converts all surrounding students into a mindless army to track them down. Learning from Oki that Sugiura has feelings for Sayaka which has motivated his actions, Gentaro makes his way back to the hospital to get her help in reaching through to Sugiura.

When he is unable to punish her to prove his convinction, the Taurus Zodiarts destroys his Gu-Anna staff to break his hold over the student body before negating his transformation. Though Sayaka thanks him, while assuring that she will return to school, Sugiura accepts Gentaro's friendship. However, the Virgo Zodiarts arrives to give Sugiura one last chance by having him kill the Kamen Rider Club. Sugiura refuses and assumes his Zodiarts form to fight the Virgo Zodiarts before it exiles him into the Dark Nebula. Enraged at its action, Kamen Rider Fourze and Kamen Rider Meteor battle the Virgo Zodiarts in their strongest forms as it overpowers them and eludes them while warning them to no longer meddle in the Horoscopes' affairs. Virgo transforms back into Emoto as he gives Gamou the Taurus Switch, as it is also revealed Emoto was the one responsible for Rokuro Utahoshi's death.

Having a loose end to deal with, Emoto finds Tomoko (as she dropped the moon rock she'd intended to give him outside his office) as he assumes his Zodiarts form and sends her into the Dark Nebula despite her trying to convince him that there is some good in him. 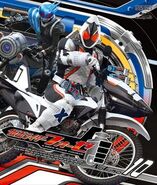 Retrieved from "https://kamenrider.fandom.com/wiki/Principle_or_Pathos?oldid=582644"
Community content is available under CC-BY-SA unless otherwise noted.