Pride, Surgery, and a Secret

Pride, Surgery, and a Secret (プライドと手術と秘密, Puraido to Shujutsu to Himitsu) is the fourteenth episode of Kamen Rider OOO.

Eiji rushes to find Ankh to save Shingo's life while Tamura discovers the truth about what it means to be a surgeon.

With Ankh going, Shingo undergoes emergency surgery to prevent his death as decides to track the Greeed down before finding the hospital director as he suffers a heart attack. Eiji tells the director that Tamura has been possessed by a monster created from her desire. The director reveals his reasons as to why he was preventing her from performing surgeries before Eiji runs off to find her. Eiji uses all of the Cell Medals in his possession to track down both Ankh and Tamura, and finds them just as Ankh is about to be killed by the Yummy hiding inside the surgeon. Before she can perform the "surgery", Eiji saves Ankh and Tamura escapes. Ankh gives Eiji several Core Medals to fight the Yummy before he flies back to the hospital to reattach to Shingo. Elsewhere, the Siam-Neko Yummy consumes Dr. Tamura just as Eiji becomes Kamen Rider OOO to fight her, transforming into Takatorartar to free Tamura from the Yummy. While holding the Yummy back, Eiji tells Tamura that the director needs her and she runs to him. Kei arrives to the hospital as she attempts to save the director, who is revealed to be her father, by operating on him after realizing that he held her back because of her pride and the lack of fear for her patient's lives. Meanwhile, the fight turns bad for Kamen Rider OOO when Kazari arrives and manages to take back his Tora and Cheetah Core Medals. But before Kazari can kill Eiji, Ankh arrives with spare Tora and Batta Medals for Eiji to resume the fight in Tatoba Combo. As Kamen Rider OOO battles Kazari and the Siam-Neko Yummy, Ankh deals with two Waste Yummy as Shintaro arrives to support Kamen Rider OOO, who is able to destroy the Siam-Neko Yummy just as Kazari escapes. With Shintaro taking his leave, Ankh gets into a fight with Eiji over losing two Core Medals in the previous fight. Back at the hospital, Eiji is pleased to learn that Kei was able to save her father after his heart attack and Kei thanks him for helping her become a better person and a better doctor. While these events transpired, Mezool has used a con-man to allow several Piranha Yummy to thrive, the Waste Yummy revealed to be created by Uva in order for her to create a full Yummy nest without interference. As the other three Greeed feast on the Cell Medals from the Piranha Yummy, they set up a plan to get their Core Medals back from Kamen Rider OOO. At the Kougami Biotech Lab, Maki is alerted to the finished analysis on the red Kujaku Core Medal. 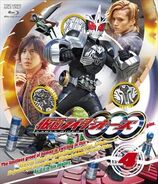 Retrieved from "https://kamenrider.fandom.com/wiki/Pride,_Surgery,_and_a_Secret?oldid=491159"
Community content is available under CC-BY-SA unless otherwise noted.