"There is no need to have mercy on a body with no core!"
―Chase prepares to terminate Lupin's core-less Roidmudes[src]

A score of Plain Roidmudes (Lost Number) were destroyed by Kamen Rider Ryugen Kiwi Arms outside of Megahex's headquarters. How they were there is not explained. Kamen Rider Gaim: Advance to the Last Stage

Prior to abandoning his Cyberoid ZZZ body to be absorbed by Megahex, Zoruku Tojo (Kamen Rider Lupin) demonstrated the ability to create core-less Roidmudes identical to the Plain Roidmudes (Lost Number), externally at least, via his Lupin Gunner. Creating a trio of Roidmudes, one of each type, after personally destroying a trio of numbered Roidmudes by himself. The Spider Type was used to leave Kiriko hanging from a tall building with his web, while the Cobra Type and Bat Type were spawned to fight Kamen Rider Drive and Mashin Chaser. The Spider Type would be destroyed by Tridoron Type Technic after it rescued Kiriko, while the remaining two of Lupin's Roidmudes were destroyed by Mashin Chaser's Tune Chaser Spider, noting that Roidmude bodies with no core required no mercy. Kamen Rider Drive: The Challenge from Lupin

More Plain Roidmudes (Lost Number) appear later on in front of the three Armored Riders, Gaim Kiwami Arms, Ryugen Budou Arms, and Zangetsu Shin, alongside some Mecha Inves and did battle with them until Drive appeared, with a mecha Kamen Rider Baron (who would supposedly siding with ZZZ Megahex but was later sided with the Riders), Mashin Chaser, the Heart Roidmude, and the Brain Roidmude assisting the Kamen Riders in fighting and destroying the fake Roidmudes. ZZZ Megahex later spawned a small army's worth of Plain Roidmude (Lost Number). After Megahex's destruction of his core, what remaining Plain Roidmudes (Lost Number) had deactivated and froze up.

Later on, Zoruku Tojo's now core-like consciousness, having combined with a Bat Viral Core, allowed him to manifest as a Bat Type Roidmude with no number just as that which he created as well as Megahex's Plain Roidmudes (Lost Number). Kamen Rider × Kamen Rider Drive & Gaim: Movie War Full Throttle

These types of Roidmudes were seen once more alongside a revived Heart, Brain and Medic during Drive's team-up with Ghost. 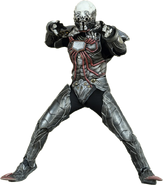 
Cite error: <ref> tags exist, but no <references/> tag was found
Retrieved from "https://kamenrider.fandom.com/wiki/Plain_Roidmudes_(Lost_Number)?oldid=552500"
Community content is available under CC-BY-SA unless otherwise noted.