Perfect Puzzle (パーフェクトパズル, Pāfekuto Pazuru) is a puzzle video game created by Kuroto Dan. It is one of the games serving as the basis for the Gashat Gear Dual.

Perfect Puzzle is a puzzle game, where the player controls all objects in the game areas as they please(essentially a Match-3 Game like Candy Crush & Best Fiends).

Transforming into Kamen Rider Para-DX for the first time having been given the Gashat Gear Dual by Kuroto Dan to warm-up while he prepared Kamen Rider Chronicle, Parado tested the power of the Puzzle Gamer by easily defeating the Level 5 Hunter Gamer Kamen Riders Brave and Snipe. 「A New Challenger Appears!」

Accompanying Dan on his failed attempt to take Snipe's Gashats while he was busy fighting the Level 5 Revol Bugster, Parado first assumed the Puzzle Gamer against Ex-Aid, holding off both of the Double Action Gamer Level XX as Genm attacked Snipe. Para-DX ultimately defeated Ex-Aid with a power combo of super strength, super speed and invisibility granted by his Energy Items. 「The Paradox Who Defeated M」

Para-DX fought Ex-Aid while Snipe fought Burgermon Bugster. During the battle, Para-DX found it boring because Ex-Aid didn't have the Mighty Brothers XX Gashat and all the other Gashats as well. He was shocked to see the Level 4 Gashat called Ju Ju Burger. Para-DX, alongside Genm, defeated Ex-Aid Burger Action Gamer Level 4 and Snipe and retrieved the Ju Ju Burger Gashat. 「A Nonstandard BURGSTER?」

Para-DX fought against Brave Fantasy Gamer Level 50 and was having a rough time. He used a Stretch Energy Item to block Brave's attack but Brave powered Para-DX down and he started getting 2 Recover Energy Items to heal himself before changing into Fighter Gamer Level 50 to take it up a notch. 「Take Off Against the Direction of the Wind!」

Shortly after Kamen Rider Chronicle commenced, Parado entered the game himself as Para-DX Puzzle Gamer. With a Critical Combo, Parado defeated a trio of Ride-Players with ease, causing the civilian users to Game Over and die. 「Start the New Game!」

When the doctors interrupted the game, the Puzzle Gamer, followed by the Fighter Gamer, were both outmatched by Ex-Aid's Maximum Gamer Level 99. Defeated for the first time, Parado conceded that Emu was the best before escaping. 「Players Who Bet on Survival」

When activated, the Gashat reformats the battlefield into a Game Area. It seem to spawn eleven different Energy Items. It has the power to change the Energy Items on the battlefield or summon them and fuse them together into new powers to enhance Para-DX's abilities. 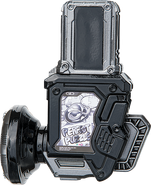