With Gamou's scheme with all twelve Horoscopes Switches thwarted, Kengo reveals the truth of his origins to the Kamen Rider Club and his eventually parting with his friends. However, the Horoscopes attack the Rabbit Hutch to kill Kengo, getting the Kamen Riders to desperately fight back to protect their friend, who must go back to the Presenters.

At the Rabbit Hatch, the gang is concerned about the Horoscopes Switches. Kengo watches the Earth from the moon before telling Kamen Rider Fourze and Yuki that he now knows why could never use the Fourze Drive. Taking off his helmet to their shock, Kengo reveals to the two that he is not human but in reality a Core Child, a construct of Cosmic Energy.

Telling the others his true nature, Kengo reveals his true origins as an emissary of the Presenter and how his father and Gamou took different paths to use the Core Switch to reach the Presenter that led to Rokuro's death. Furthermore, revealing his objective was to review humanity, he is to return to the Presenter with him now able to use the Fourze Driver to warp them. Despite Gentaro's attempt to talk him out of seeing himself as a thing instead of a person, Kengo severed his ties to them and the others. After taking Kengo to the JAXA, Gentaro points out that he had the same expression he had when he first saw Earth from the Rabbit Hatch.

After being found out to have been pretending to be emotionless, Kengo finally breaks down and tearfully admits that he does not want to leave but he must. Gentaro gives Kengo the Fourze Driver and tells him that he will leaving as both a human and as friend with the promise that they will all meet again. But on the way out, the three learn from an injured Mr. Ohsugi that the Rabbit Hatch has been attacked by the Leo Zodiarts with the rest of the Kamen Rider Club still there. Waiting for them with Tatsugami, revealing that his shock that a piece of the lunar base still remains, Gamou demands the Core Switch.

However, when Kengo explains that only he can return to the Presenter, a furious Gamou transforms to kill him to prove himself worthy. After Kengo deflects the Sagittarius Zodiarts' attack, Gentaro transforms into Fourze Cosmic States to fight the Sagittarius and Leo Zodiarts as Kengo gets the club members to return to Earth after the airlock is destroyed. Giving Yuki a note and telling her that The Hole will cease upon his departure, Kengo joins the fight to knock the Horoscopes back before Ryusei becomes Kamen Rider Meteor so Gentaro can safely give Kengo the Fourze Driver before taking him into the Rabbit Hatch.

However, thinking of his friends as he prepares to leave the Milky Way, Kengo is shocked to find the Sagittarius Zodiarts assuming his Supernova form to stop Kengo. Knocking the youth down with his Supernova Kick, Sagittarius Nova crushes the Core Switch, with Kengo's body dissolving to Gentaro's horror.

This episode, along with the final episode, was combined into the director's cut edition, Kamen Rider Fourze: Final Episode (仮面ライダーフォーゼ FINAL EPISODE, Kamen Raidā Fōze Fainaru Episōdo) with an additional audio commentary from director Koichi Sakamoto. It was released on DVD and Bluray on February 21, 2013. 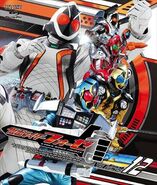 Retrieved from "https://kamenrider.fandom.com/wiki/Parting_Friends?oldid=491607"
Community content is available under CC-BY-SA unless otherwise noted.