In presumably an altered variation of the events during Kamen Rider Drive: Surprise Future, the Paradox Roidmude most likely defeated Shinnosuke Tomari. He was later brought to the main universe by Swartz, impersonated Ora and became Another Drive.

Paradox Roidmude later taunted a weakened Ora by strangling her, resulting in Ora killing Heure. Witnessing this, Paradox laughed and exclaiming that no matter what, he and Ora are the same. Unfortunately, his action put Sougo into a blind rage as he transformed into GrandZi-O, summoning Kamen Rider Drive to aid him and initiating the All Twenty Time Break and Speed Drop to mercilessly destroy the Roidmude Cores.

The Core is the basic essence or 'soul' of the Roidmude. Paradox's body and subsequently his Core was destroyed by Kamen Rider GrandZi-O and Drive.

This is Roidmude 108's Supreme Evolved (超絶進化, Chōzetsu Shinka) form. Its appearance is identical to the Over Evolved State (超進化態, Chō Shinka-tai), sporting a golden body.

While impersonating Ora, Roidmude 108 is portrayed by Ayaka Konno (紺野 彩夏, Konno Ayaka) who also voices his Another Rider form. His suit actor as an Another Rider is Eitoku (永徳, Eitoku), who is best known as the suit actor of most secondary Heisei Riders. 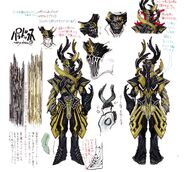 Another Drive concept art
Add a photo to this gallery

Retrieved from "https://kamenrider.fandom.com/wiki/Paradox_Roidmude/Another_World?oldid=675922"
Community content is available under CC-BY-SA unless otherwise noted.