What Is The Real Intention of Krim Steinbelt?

For the original Drive user of 2035 that Roidmude 108 masquerades as, see Eiji Tomari.

108's activities during the Global Freeze of April 2014 remain unknown. By August of 2015, 108 had been imprisoned by the other Roidmudes and deactivated due to his behavior. 「Kamen Rider Drive: Surprise Future」

In 2035, 108, now Paradox, defeated and murdered the future Kamen Rider Drive, then stole his Drive Driver to become Kamen Rider Dark Drive. His true goal was later revealed - he wanted to go back in time to revive and fuse with his past self in order to evolve and create an eternal Global Freeze. To do that he assumed Eiji Tomari's form and traveled to 2015, where his goal was achieved and his fusion with his past self created the Paradox Roidmude. His plans however were foiled when Shinnosuke Tomari restarted his Drive Driver with the Tridoron Key and used his son's Shift Car to assume a heroic version of Type Next, using the form's Rider Kick after pulverizing Paradox in a fit of rage to destroy him for good. 「Kamen Rider Drive: Surprise Future」

Upon his destruction, Paradox was added to the Eradicated Roidmude Table. 「When Will the Second Global Freeze Start?」

The 108 Roidmudes' fragmented data would lead to the emergence of the amalgamation Roidmude 5886. 「Drive Saga: Kamen Rider Heart」

. Among those pitted against the Zyuohgers

, Paradox was beaten by Zyuoh Elephant

to be destroyed by the combined Zyuoh Slash 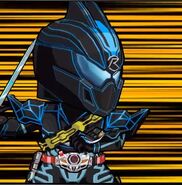 After awakening the past Roidmude 108, "Eiji" merges with it, coining this evolution as a Supreme Evolved (超絶進化, Chōzetsu Shinka). Its appearance is identical to the Over Evolved State (超進化態, Chō Shinka-tai), sporting a golden body.

Type Next (タイプネクスト, Taipu Nekusuto) is Dark Drive's futuristic mercedes-based form. Accessed through the Next side of the Shift Next Special Car, this form bears the Type Next Tire (タイプネクストタイヤ, Taipu Nekusuto Taiya).

Without a user, Dark Drive can operate autonomously like a remote-controlled drone, accepting orders and executing them. It is noted that in this specific configuration, Dark Drive without a host is weaker to some degree. The body of the autonomous Dark Drive can be recreated with its Drive Driver and Shift Brace intact.