Pac Adventure (パックアドベンチャー, Pakku Adobenchā) is a video game based on the original Pac-Man game released by Bandai Namco Entertainment Inc., which serves as the basis for the Pac Adventure Gashat. 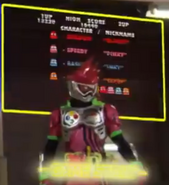 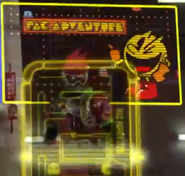 Similar to the original Pac-Man's gameplay, the player must evade the enemy's hits to avoid receiving damage. The player can consume special items known as Power Cookies generated in the Game Area, which function similar to the Power Pellets in the Pac-Man games, allowing the player to attack their enemy and defeat them before the Power Cookie wears off.

Gameplay from the original Pac-Man game

The Game Area generated follows the style of the Pac-Man stages. 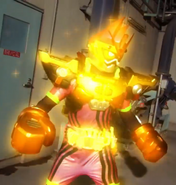 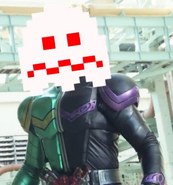 Double being influenced by the vulnerable ghost effect after Ex-Aid eats a Power Cookie.

Pac Adventure was created by Kuroto Dan through data recorded during the incident with the Pac-Man Virus. Kuroto admitted he created the Gashat thanks to Dr. Pac-Man by using him as an unknowing pawn in his plan to complete the data. [Kamen Rider Heisei Generations: Dr. Pac-Man vs. Ex-Aid & Ghost with Legend Riders]

Pac Adventure appeared as one of three Bandai Namco Gashats, along with Famista and Xevious, which were held by "Dr. Pac-Man", appearing as an antagonist to Kamen Rider Genm. [Part. I: Legend Rider Stage] In reality, rather than the late Michihiko Zaizen, this "Dr. Pac-Man" was actually Parado, who at that time was working with Kuroto Dan in a scheme which saw him carrying the Bandai Namco Gashats, evidently intending to collect their data, while Genm worked on the legend Rider Gashats which he compiled into Kamen Rider Battle: Ganbarizing. [Part. III: Final Legend Stage]

Receiving the Pac Adventure Gashat from "Dr. Pac-Man", Kamen Rider Ex-Aid assumed the Pac Gamer to engage the Kamen Riders summoned by Genm's Ganbarizing Gashat. Finding himself pursued in the Game Area by Kamen Rider Double, Ex-Aid turned the tables on his opponent when he reached a Power Pellet which turned Double into a vulnerable ghost, allowing Ex-Aid to fight back and eventually defeat the Rider with Pac Adventure's Critical Strike. However, for reasons unknown, a Game Clear message did not appear. [Part. II: Legend Gamer Stage]

The game was ultimately cleared by Ex-Aid through besting Ganbarizing's Kamen Rider Hibiki using a fourth Gashat, Taiko no Tatsujin. His task completed, "Dr. Pac-Man" recovered the four Bandai Namco Gashats as well as the Ganbarizing Gashat from the doctor Riders before returning with Genm to Genm Corp. his base, where they were added to Dan's assembly of seventeen Heisei Rider Gashats as he noted that everything was proceeding according to plan. [Part. III: Final Legend Stage]

When activated, the Gashat reformats the battlefield into a Game Area. It doesn't seem to spawn any Energy Item containers, but instead summons the Pac Gamer.