Over "Quartzer" is an opening theme (OP) from Kamen Rider Zi-O. It was performed by Shuta Sueyoshi (AAA), featuring vocals from ISSA (DA PUMP). 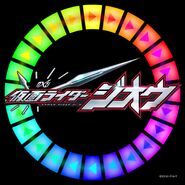 Alternate digital release cover
Add a photo to this gallery

The official music video was released online on December 15, 2018 as a hybrid alongside a commercial spot for the song's release.

) working to create an A.I. However the A.I splits into two and takes the form of both Sueyoshi and ISSA, who then begin their escape. The scientists attempt to block them, but the two easily override them and create backup dancers to assist them in their escape. The scientists are able to create a firewall to prevent ISSA from escaping, but Sueyoshi creates a backdoor that allowed ISSA to break through it. The scientists then proceed to isolate them into a sphere before deleting them. When the two believe that the threat has been subsidized, the two appear in reality behind them.

Retrieved from "https://kamenrider.fandom.com/wiki/Over_%22Quartzer%22?oldid=544566"
Community content is available under CC-BY-SA unless otherwise noted.