Oronomin C (オロナミンＣ, Oronomin C) or simply Oronamin is a vitamin infused carbonated beverage manufactured by Otsuka Chemical Holdings Co., Ltd. This popular drink is advertised as a health beverage as it is infused with amino acids, vitamins such as B12 and B2 and its main ingredient, Vitamin C.

Starting in 2004 with Kamen Rider Blade, during commercial breaks on the Sunday Morning Kids time slot, TV advertisements of the drink featuring the actors of the Kamen Rider shows in character would be broadcast as a cross-promotional tie-in.

Kamen Rider Den-O after a Otonamin C Stage Show, greeting kids while a promoter gives free samples of the drink to patrons. 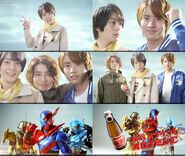 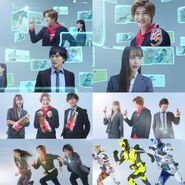 Retrieved from "https://kamenrider.fandom.com/wiki/Oronamin_C?oldid=570659"
Community content is available under CC-BY-SA unless otherwise noted.