The Onpu Gamma (音符眼魔, Onpu Ganma, lit. "Music Note Eye Devil") is a type of a Gamma that achieved evolution through a jabot.

The first Onpu Gamma was summoned to target Kosuke Kimijima in order to unseal the Beethoven Ghost Eyecon. He convinced Kosuke that musicians only became famous after their deaths and tried to lead him to kill himself so that Beethoven's soul could be unlocked from a piece of his original sheet music at the price of Kosuke's life. However, Takeru and Kosuke's sister convinced him not to, and his passion for music unsealed Beethoven's Parka Ghost, which Takeru turned into his Eyecon. Kamen Rider Ghost fought the Gamma in his newly-attained form, Beethoven Damashii, and then destroyed it with Musashi Damashii's Omega Drive/Slash. Destiny! Reviving Melody!

The second Onpu Gamma was summoned by Igor to compose a musical piece to be used for the opening ceremony of the Demia Project. Do-or-Die! Ready for Infiltration! However, all of his efforts were criticized by Igor to be worthless, causing him to run away and fall into a slump. Along the way, he met "Cubi", the friendly Gazai Gamma, who was also in a slump as well. They both found something in common between them, in that all they wanted to do was to pursue their own passions. They became friends and soon, Cubi decided to go on a trip with the Onpu Gamma to try to get out of their slumps. Bursting! Power of the Depths! Cubi would later send a handmade card to his friends at the Mysterious Phenomenon Institute, featuring a depiction of himself and the Onpu Gamma. Upheaval! The Magistrate's Decision!

While traveling, both Gammas were witness to the mass appearances of Adel's likeness overriding that of the humans as a result of the Emperor's use of the Demia Project to take over the human world. Seeing this made the Onpu Gamma realize that something very terrible was going on. Duel! Words from the Swordsman! 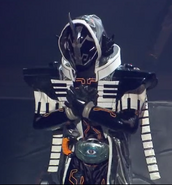 The Gamma are created from the Gamma Eyecons (眼魔アイコン, Ganma Aikon), with this one having merged with a jabot, provided by Mysterious Man's hand to create the first Onpu Gamma.

This Eyecon is later seen when Kamen Rider Ghost Musashi Damashii used his finisher to defeat Onpu, falling to the ground from the death of Onpu's Assault, along with a jabot that formed from the Gamma's jettisoned Parka Ghost, where it ultimately explodes.

The second Onpu Gamma's Eyecon shatters with the rest of the Gamma Eyecons as the Great Eye leaves Earth and the Gamma's Eyecon System shuts down, returning his soul to his original body.

The Gamma Assault (眼魔アサルト, Ganma Asaruto, lit. "Eye Devil Assaut") are Gamma born from the Gamma Eyecon. They first appear in Primal Body (素体, Moto-tai). Gamma Assaults do not possess unique abilities of their own, but can gain powers of their own through being infused with an object around them.

Intangibility
A Gamma's primary ability is to turn themselves invisible and intangible to the public. Those whom wielded an Eyecon are capable of witnessing them.
Infusion
Gamma can infuse themselves with ordinary objects, converting said object into a Parka Ghost, to achieve a unique evolved form. Should the Gamma be defeated, the object will be restored to its original form as the Gamma is destroyed.

Intangibility
A Gamma's primary ability is to turn themselves invisible and intangible to the public. Those whom wielded an Eyecon are capable of witnessing them.
Eyecon/Parka Infusion
Gamma Assaults can infuse themselves with Ghost Eyecons or at the very least, their Parka Ghosts to become Giant Gamma.
Sound Manipulation
Onpu Gamma can manipulate sounds to his liking. He can also neutralize sounds within a 60 km radius.
Musical Notes
Onpu Gamma can create and launch energy constructs of musical notes as weapons. Unlike the Beethoven Damashii's rainbow-colored notes, the Onpu Gamma produces dark notes.

While assuming Beethoven Damashii, The Onpu Gamma dons the Symphony Hood (シンフォニーフード, Shinfonī Fūdo). Onpu Gamma also wears the Concerto Coat (コンチェルトコート, Koncheruto Kōto), where he is able to create energy constructs of musical notes through sound by pressing the 'piano keys', and manipulate them in a manner similar to how a conductor controls an orchestra via hand gestures.

The Onpu Gamma is preserved following his death in a specially created Gamma Eyecon which allows the Gamma Superior such as Igor to assume his Parka Ghost by channeling his power through the Proto Mega Ulorder, in a sense becoming the reincarnation of the Onpu Gamma. Connect! Genius Juvenile!

Gamma Superior Onpu
Add a photo to this gallery

Retrieved from "https://kamenrider.fandom.com/wiki/Onpu_Gamma?oldid=550214"
Community content is available under CC-BY-SA unless otherwise noted.